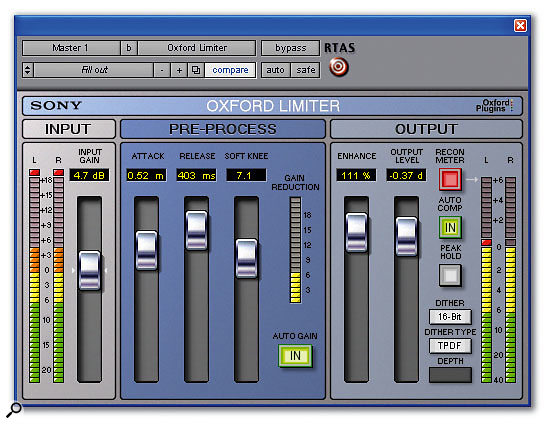 Like many of Sony Oxford's plug-ins, their new limiter takes a familiar concept and applies a novel twist.

The idea behind Sony's Oxford Limiter is similar to that of Waves' L2 and many other wide-band mastering limiters: it can make your music louder without introducing clipping. However, Oxford Limiter also has a unique selling point in Sony's proprietary Enhance function. This, it's claimed, can preserve fragile transient information even when the audio is being pushed hard against the end-stops, allowing you to achieve greater subjective loudness with less damage to the signal.

Reading Between The Lines

Oxford Limiter is available in TDM and RTAS formats on Mac OS X and Windows, and is authorised to an iLok key. The limiter itself is a pretty comprehensive design, using lookahead detection to anticipate peaks and intelligent adaptive processing to tame them, and featuring a detection algorithm that is capable of spotting not only sample values that would hit 0dBFS, but also inter-sample peaks that might clip the D-A converter when the signal is reconstructed. The output level meters go to +6dB in order to display these peaks when the Recon Meter button is selected, and a second button labelled Auto Comp automatically brings the level down for an instant whenever such a peak is encountered, providing either a safety net or a second layer of limiting, depending on how far you're pushing the output level. The ability to detect and neutralise illegal inter-sample peaks can come in very handy even if you don't plan to use the limiter function at all.

Sony say that the limiter section was designed with two separate purposes in mind. The first is the kind of fast peak limiting required in order to maximise loudness without clipping, while the second is management of gain changes over a much longer period. To aid in the latter, the limiter's release time is variable up to 10 seconds, and there is also an Auto Gain button, in essence an automated volume control that can smooth out the kind of dynamic variations in the source material that occur over a timescale of seconds or even minutes.

Further control comes in the shape of a Soft Knee parameter, which can reduce the threshold at which limiting begins to take place from 0dB anywhere down to -10dB. As you'd expect, 'harder' settings give punchier results, but 'softer' ones often sound smoother and less obvious in action. The most unusual feature of the limiter section, though, is the Attack time control, which is variable from 0.05ms to 1ms. Most limiters are simply designed to have as short an attack time as possible — in fact a limiter is sometimes defined as a compressor with instantaneous attack and an infinite compression ratio — and this is usually desirable, since the most prominent peaks in an input signal are often due to transient spikes that rise almost instantly. Here, however, the ability to slow the attack time has two functions. First, it can be more transparent when you're using Oxford Limiter solely for long-term gain reduction rather than loudness maximising. And second, it allows transient peaks to pass through the limiter algorithm and be dealt with by the Enhance function.

All In A Dither

If you're using a mastering limiter, it should always be the last element in any signal-processing chain before any word-length reduction that might be necessary to fit your material to a particular release format, such as CD. Like many mastering limiters, Oxford Limiter builds in a dither section at the output stage to convert its output to the appropriate bit depth for whatever medium your music is intended — since the plug-in's internal resolution is higher than 24-bit, dither is applied whether you choose 24- or 16-bit output. Five noise shapes are available. The default high-pass Triangular Probability Density Function shape distributes the dither noise fairly evenly across the frequency spectrum, while noise-shaping Types 1 to 4 offer different distributions which concentrate the noise in particular areas of the spectrum. Applying more shaping to the dither noise can make it less audible, but can also have undesirable consequences, so Sony also provide a Depth control which allows you to achieve the best balance by varying the extent to which the noise is shaped.

The manual states that the Enhancement process 'enhances the perceived loudness and presence of the programme by modifying the dynamic and harmonic content of the signal', somehow preserving the impact of transients in a heavily limited signal whilst ensuring that they never exceed 0dBFS. No explanation is forthcoming as to how the process actually works, but I suspect that it involves momentarily cutting energy from the low-frequency end of the spectrum in order to keep more of the high frequencies that are characteristic of most transient sounds. The manual suggests that Enhance will be more effective on fuller mixes than on solo instrument tracks and other sparse recordings, and my tests bore this out: there was obvious distortion on a solo bass or acoustic guitar at high Enhance values, but with full band recordings, the function allowed me to add several dBs worth of perceived loudness over and above what could be achieved through limiting alone. However, I found it essential to listen to the results very carefully, and preferably on headphones. When you go slightly too far with the enhancement, the distortion that results is unpleasant but not always obvious; what's more, it usually shows up only in a few small sections of the programme material, and not always where you might expect.

As with most mastering limiters, Oxford Limiter 's interface is very simple, and I only have a couple of very minor niggles: one is that parameter values are set by the position of the top of each slider, not the centre point, which takes getting used to; the other is that I think the gain-reduction meter would benefit from slightly more resolution at the bottom end of the range. In general, though, I found Oxford Limiter easy to set up and flexible enough to cope with all of the obvious applications.

Of course, there will be mastering jobs where a multi-band design is needed in order to tackle a particular problem with the programme material, and the likes of Waves L3 offer more powerful tools for problem-solving, as well as more radical ability to change the sonic character of a mix. However, I didn't find that L3 offered a noticeable advantage over Oxford Limiter when it came to achieving maximum loudness: the latter's Enhance function is a simpler but effective alternative to L3 's psychoacoustic processing. The ability to seek and destroy illegal inter-sample peaks is also handled very straightforwardly, and the Soft Knee option complements some material nicely. In most 'normal' mastering situations I found that the Auto Gain function made no difference, but there are situations where it comes in handy: if, for example, you have to apply heavy limiting to a very dynamic classical piece, perhaps for broadcast use, it does help make sudden transitions from loud to quiet sections sound more natural.

Oxford Limiter offers all that you'd expect from a conventional wide-band limiter along with the unique Enhance option, and I can see it becoming a must-have for mastering studios.

A well specified mastering limiter with a special Enhance function that sets it apart from much of the competition.