These powered PA speakers have a simplicity of operation that belies the powerful technology within.

Anyone who has used or been in the market for active portable speakers will more than likely have seen, heard or used an RCF product at some time. The Italian company, based in Reggio, are well-established as designers and manufacturer of transducers and speaker systems, and they have built up a fine reputation for quality and reliability over the years. Their ART range of portable loudspeakers have proved very popular, and the series is currently enjoying ‘Mk4’ status. 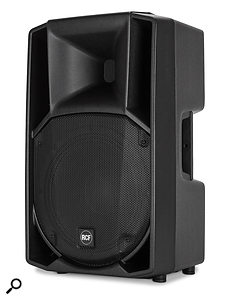 The model I’ve been using for the last few weeks is the ART 712-A Mk4, which sits toward the smaller end of the range. The full Mk4 series offers the choice of eight-, 10‑, 12- and 15‑inch woofer-based two-way driver formats, with additional model variants in the larger versions offering the option of a 1.4-inch exit compression driver and, in the case of the 15-inch models, upgraded drivers, higher maximum output and lower crossover point (in the top-of-the-range ART 745‑A).

All the products in the current series use the same amplifier module (rated at 1400W peak, that is 700W RMS split 500W to LF and 200W to HF sections), with the exception of the smallest model, the ART 708‑A, which is equipped with something more suitable (800W or 400W RMS) for its size and intended application.

The ART 712-A Mk4 is an example of what nowadays must be the most common format of portable powered speaker, namely the 12-inch, two-way design housed in a moulded cabinet. This particular marketplace is crowded, with makes and models from many manufacturers, and the choice of which one to buy depends on what features the potential user values most, be it back-panel features, sheer power, weight, number of handles or simply price.

The speakers arrived at my workshop wearing genuine RCF tailor-made covers, of the type that unzip at the front and rear to allow the unit to be operated with the covers in place. I was immediately impressed with the quality of these covers, which are very effective and don’t detract from the external appearance of the speakers, but are very easy to remove when not required. After opening the Velcro flap on top of the cover I discovered a large, comfortable top handle with a nice deep recess easily large enough to allow comfortable lifting. Top handles really come into their own when you need to move the speakers around on the floor, particularly when loading them into the back of a van.

The ART 712‑A Mk4 weighs about 18kg and is easily manageable, although you obviously can’t get to the side handles with the covers in place. Transporting a pair of these around and lifting them up onto stands presented no problem at all, and they have a pleasing compact appearance that would fit in with most live applications from pub bands to corporate events. The reflex-ported moulded cabinet is angled so that it can be used as a ‘sideways’ floor monitor, and it has a substantial metal pole socket underneath. The drivers are, of course, RCF products with a crossover point at 1.6kHz; the 12-inch woofer has a 2.5-inch voice coil and the compression driver employs a 1.7-inch diaphragm behind a standard one-inch exit on a 90 x 60-degree waveguide.

The front of a portable powered speaker generally only tells you who made it, but the back panel gives you a good idea as to what you can do with it. In the case of the ART 712-A the control panel tells you that it is an uncomplicated product that inexperienced or unfamiliar users should have no difficulty connecting up and getting it working.

The amplifier module has a large, smooth heatsink with connector and control panels above and below; at the top is the input section with a direct loop-through for connecting another speaker, and simple controls for input sensitivity (mic or line) level and fixed EQ boost. Three LEDs indicate signal present, limiting and system status — essentially an indication that thermal limiting has kicked in. Down below is where you plug the IEC mains lead in and switch the power on, so all in all it’s not going to require a master’s degree in sound technology to get the ART 712‑A rigged up and working.

Having mounted the ART 712-A speakers on poles above a pair of my usual 15-inch subs I ran various recorded material through them at different volume levels. I stuck to my ‘test list’ of tracks, which covers quite a wide range of musical styles, from thumpy ‘70s Crusaders through acoustic, jazz and contemporary stuff to orchestral and choral pieces both large and small.

These compact RCFs produced a well-balanced, well-rounded sound with a pleasing crispness to the upper-mid and HF content. Vocals were always clear and the smooth delivery was maintained at higher listening levels, which produced a fatigue-free experience — I’d say these speakers do handle a fairly hot incoming signal well, and appear to be designed to operate with the input level control wound fully clockwise rather than at a nominal ‘centre detent’ position. This is, in my view, a good design point as it lessens the risk of accidentally overdriving them, especially when being set up by an inexperienced user, and if the input signal is way too low for normal operation there’s always the option of using the ‘mic’ setting for increased sensitivity.

The bottom end sounded very well defined and without any unpleasant evidence of DSP ‘hyping’ to achieve a decent bass output from a relatively small cabinet. The manufacturer’s web site tells you that there are “no complex menus, no knobs to understand”, so although on the one hand you can’t tweak and twiddle to fine-tune every application, it does mean that there’s nothing to get wrong after the mixer other than placement and playing level. I reckon these speakers will definitely appeal to anyone who has written ‘simple but effective’ on their list of requirements. The only controls are input level, mic/line sensitivity and a flat/boost switch that introduces a degree of lift in the upper and lower ends of the overall response for use at very low levels; for most live-sound use you’d probably never use this feature but it would be handy for, say, low-level audio-visual playback.

I liked and appreciated the simplicity of the control panel — I can’t see how you could go far wrong hiring these out to anyone who can operate a tap. I also very much like the ability to plug a microphone directly into the speaker, which means one ART 712‑A plus a mic equals a complete vocal PA, and that’s an equation that works for me.

Taking the RCFs out on a couple of live gigs was both easy and rewarding in a ‘job done’ kind of way. They are — as mentioned already — easy to set up and get running, both electrically and physically, and they are a very good example of plug-and-play PA components. Out of habit I set the level controls to centre position (there’s a mark in the middle of the printed scale that sort of suggests this, although it’s not the ‘unity’ position) and because I didn’t need the system to be too loud I just left it this way.

The first event needed only live vocals against an 18-piece band with lots of unmiked brass, and the results were excellent — plenty of projection and, therefore, clarity across a programme of ballads and uptempo classic pop. I appreciated the light weight and good handle design of the ARTs, both when setting up and packing up, and although we weren’t trying to achieve stadium levels the output levels were more than enough for the 200-seater venue.

As I only had one pair of the RCFs to try I wasn’t able to use them as wedge monitors at the same gig, but I did take them along to rehearse with the same band, and here the simple mic-into-speaker setup does work, but you have to be careful as there’s no monitor EQ facility so I would tend to use them as monitors via a mixing desk to high-pass the foldback signal — or (as we did) use them off the floor, in which case they’re perfectly fine as they are.

On a second live job with a five-piece function band I linked the ARTs up with my own subs and ran them from the high-pass sub feed. This unleashed more of their power and I ran them at a much higher level, which was still free from harshness or audible limiting even when occasionally driven ‘into the lights’, thereby bringing the soft limiter into play.

The balance and smooth performance of the ART 712‑A units is not a happy accident; that RCF design and manufacture their own drivers, of course, puts them in the enviable position of being able to design the whole package and match all the components to work optimally together, rather than using available in-budget stock components and simply applying enough DSP to make it all work. Having said that, the processing required to achieve great performance — especially from a compact product — is an important part of the picture, and one area that RCF have taken trouble to underline is their filter designs, which are a critical part of producing a smooth crossover performance between driver outputs in a multi-way system.

RCF call their filter technology ‘FIRPhase’, the ‘FIR’ part meaning ‘finite impulse response’, which is a type of filter design particularly suited to audio crossover applications. However, the clever part lies within the processing algorithm, which, as I understand it and in simple terms, applies phase correction to particular frequency bands using a ‘recursive least squares’ approach, and also applies amplitude correction where necessary to achieve the desired overall response. The combined effect is to produce smooth crossover performance and to bring the different frequency components of the output signal into focus by reducing phase ‘smear’, which can be an undesirable product of filtering.

If you want the full story, or just some light bedtime reading on the advantages of recursive least squares over least mean squares, you can download the white paper from RCF’s web site as a good starting point. Or just go and have a listen.

The ART 712‑A Mk4 is a smart little active speaker from a reputable stable. It maintains an outward simplicity that makes it an easy-to-use and flexible product, whilst having enough clever technology under the hood to achieve impressive audio performance. I didn’t find anything to dislike about it and I’d be more than happy to use it for my own events or to put it into my hire list. It seems like a tough unit too, with a generally well-engineered feel to it. The RCF protective covers are also very well made and highly practical for road use, and I’d certainly be bargaining hard with my supplier for these to be part of my purchase deal!

Finally, when contemplating any purchase I also like to consider how any manufacturer stands behind their products, and although these, like most, are produced away from these shores, I am hearing good things about the sales and support being provided by the RCF UK team. In what is probably the most crowded and competitive slice of the portable live-sound speaker market, I’d say that the ART 712-A Mk4 is definitely worthy of consideration whatever the application. As ever, if you want to find out more, then visit the RCF web site, and plan a visit to your local pro audio dealer.

Practically every PA company makes an active, 12-inch, plastic-enclosure speaker — brands to look out for include Mackie, PreSonus, Peavey, Yamaha, JBL, Alto... and many others!

A no-frills but eminently capable speaker that will find a lot of uses in a variety of situations.

£489 per speaker including VAT.