Fine‑tuning level automation on key parts can make a huge difference to your mix, but it's a tedious process — unless a plug‑in does it for you! 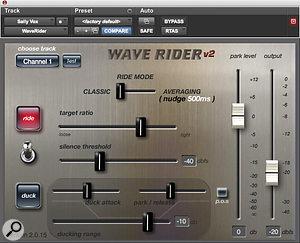 Regular readers may remember that I have a habit of championing small plug‑in developers, especially when they develop a unique product. So back in May 2009, when I heard about Wave Rider, from a small company based in New Zealand called Quiet Arts Ltd, I followed the progress of this plug‑in with interest — as readers to my Pro Tools blog (www.osd‑uk.com/protoolsformedia) will know. Company founder Vedat Kiyici describes it as a unique RTAS plug‑in that detects audio signal level on the inserted channel, and uses that information to control fader movements. This allows it to perform several functions automatically that would otherwise require a human hand on the fader. Its Ride algorithm automatically raises or lowers the fader level to maintain a user‑selectable output level by writing volume automation on the timeline, while the Duck function will lower the level of a second, target track by a user‑selectable amount if there's signal present on the inserted track. The third main function allows faders to be 'parked' at a user‑defined, low level when there's little signal, and have them jump up to full output when there's strong signal present, maintaining a steady output level.

Back in May 2009, Wave Rider was the only plug‑in of its kind on the market, but in November of that year, Waves announced a plug‑in called Vocal Rider. Reviewed by Paul White in the January 2010 issue of SOS (/sos/jan10/articles/vocalrider.htm), it works along similar lines, but it does not need to write automation to your Pro Tools session in order to adjust levels — and when it is set to generate automation, it automates the level of its own internal fader rather than the Pro Tools channel fader. Vocal Rider is, as the name suggests, specifically designed to ride the levels of vocal tracks automatically. All you need to do is set the target range of the vocal level in relation to the rest of the mix, after which Vocal Rider compensates for all deviations from the target, intelligently raising or lowering the vocal volume instantly.

More recently still, Quiet Arts have released version 2 of Wave Rider, so we thought this was an appropriate time to test out these two plug‑ins alongside each other.

Both plug‑ins use iLok assets to authorise them, although it is also possible to authorise Wave Rider to a particular hard drive. Installing Wave Rider is simple. If you're upgrading to version 2, you will need to manually delete files, but the instructions are very clear. It needs to be set up as a Peripheral in Pro Tools, as it 'pretends' to be a control surface in order to write the fader automation. As such, it doesn't play well alongside all actual control surfaces, especially Avid's Command 8: if you have one of these, it will have to be disabled completely so that Wave Rider can work. I have a Euphonix (now Avid) MC Control v2, which interfaces with Pro Tools 8 as a MIDI controller and uses the HUI profile, so I had to have that in the first 'slot' and Wave Rider in the second. This caused some confusion at first, but shouldn't be a problem with Pro Tools 9, as Eucon‑enabled control surfaces talk to Pro Tools 9 natively rather than using the HUI emulation.

Vocal Rider, by contrast, doesn't need setting up, as it is a conventional plug‑in, but it does require that you create a mono bus containing a music mix that can be sent to its key input. It's a shame that it doesn't support a stereo source on the key input, but I guess that's a Pro Tools plug‑in limitation rather than a Waves design limitation.

So, down to business. How did these two plug‑ins handle some typical automatic mixing scenarios? To start with, I brought up a session in which a large backing arrangement was overlaid by a solo vocal with a wide dynamic range that needed managing, and which I had originally controlled using both a compressor plug‑in and level automation. I duplicated the vocal track and used one plug‑in on each copy.

I started by dropping Wave Rider on the first track, and set the 'Choose Track' parameter to Channel 9, having first turned Track Numbers on in the Pro Tools View menu. However, when I hit the usefully provided Test button, it did nothing. After some experimentation, I switched to Channel 1 and it worked. The manual explains that with the 002, 003 and other HUI controllers (which included my MC Control), Wave Rider treats the first available track as channel 1. Because I had my MC Control set to the first eight tracks in the Session, track 9 was actually the first available channel, in the sense of not being already assigned to a controller.

Wave Rider operating with a compressor on the vocal channel (black trace) and without (red). As you can see, it correctly applies more gain variation when it's not being helped out by the dynamics plug‑in! You can see that Wave Rider contained the dynamics in all the right places, and it sounded, well, invisible! I couldn't hear any side‑effects, the vocal levels were just right, and they didn't sound over‑compressed, as is often the case when you use a compressor plug‑in to manage a vocal with a huge natural dynamic like this one. I still hadn't even modified the default settings, and hadn't even needed to engage the new Averaging feature in v2, which employs up to 500ms lookahead to generate a smoother 'averaged' key signal rather than simply responding to instantaneous variations.

On the duplicate vocal track, I inserted Waves' Vocal Rider. Unlike Wave Rider, Vocal Rider controls its own level fader rather than the channel fader in Pro Tools, and its action is immediately obvious — you don't have to wait for it to listen to the track and write automation. However, its actions were coming over as much more vicious. I tried to reduce the Sensitivity a bit, but still wasn't happy with the way it was working, so I dug out the manual and realised that it would probably work better if I fed the key input with a mix of the backing track. The key input is mono, so I bussed the entire backing track to a stereo bus and fed one side of that to Vocal Rider. Even after I had done this, I still needed to adjust the Vocal and Music Sensitivity controls, as well as the upper and lower Range settings, and no matter what I did, it still came across as a little vicious in the way it controlled its fader. Unlike Wave Rider, meanwhile, it didn't bring up the quieter sections. Take a look at the screen above

The automation graphs produced by Wave Rider (top) and Waves' Vocal Rider (bottom) on the same vocal track. Vocal Rider has failed to lift the quiet vocal passages at the middle and towards the end, and has also applied a large boost over the long sustained note at the end.: the top blue track is the Wave Rider volume graph, and you can see that it is lifting the quiet sections and controlling the loud parts. The bottom red track is the automation that Vocal Rider wrote; although it controls the loud sections in a similar way, it hasn't lifted most of the quiet sections, and on the last, sustained note, pushes the level up for no reason. If I hadn't had such a good experience with Wave Rider, I might have accepted the Vocal Rider automation and just gone in and manually adjusted the bits that weren't quite right — but if a small developer can come up with an excellent algorithm and make it work, surely Waves, with all their expertise, should be able to do so too?

Wave Rider also has two further tricks up its sleeve that Vocal Rider can't emulate. To try out the Duck settings, I opened a session that had a music backing running beneath some dialogue, with an instrumental loop under the speech and the verse or chorus of the song popping up in between the dialogue. I inserted Wave Rider onto the dialogue track and then set it to control the music track, flicked the switch on the plug‑in to Duck and then experimented with the Ducking Range, Attack and Release to get the right amount of ducking. In this mode, the Park control determines where the fader will end up when not ducking. Some initial experiment was required, but very soon Wave Rider was creating a very good mix that was, again, very similar to my own 'hand crafted' version. 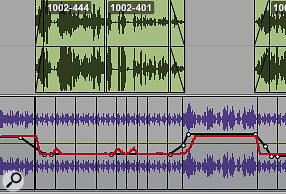 In this session, I had originally written manual automation (black trace) to duck the music track beneath the narration. As you can see, Wave Rider's automated alternative (red trace) is very similar.

Finally, I tried the Park on Silence feature, which Quiet Arts recommend in multi‑mic situations for attenuating tracks to reduce leakage and spill. I opened up a session where an interview had been recorded with omnidirectional personal mics for the interviewer and the interviewee, and I needed to dip down the mic of whichever of them wasn't speaking to keep spill to a minimum. I inserted two instances of Wave Rider, turned on the POS button on both tracks, and fairly quickly was able to find a combination of the Silence Threshold, Attack, Release and Park Level settings that did the job. I tried to use the new Averaging mode here, but was disappointed to find that I couldn't take the Threshold above ‑40dB in this mode. In this, and I suspect most applications, this is too low a threshold, as the background noise on the unused mic was around ‑30dB.

As a Pro Tools Mac user, the choice between these two plug‑ins is simple: Wave Rider is intuitive, does three different things, and it just works. The inconveniences of the setup and manually deleting files when upgrading, are very small in comparison to the features it brings to the table in situations where you need to perform complex level management under time pressure.

However, if you are not a Mac Pro Tools user, Vocal Rider is the only game in town. It's a shame that it takes some playing around to get it to work, which goes against the premise that it is an automated mixing plug‑in designed to save time. It's definitely not as smooth as Wave Rider, but on the other hand, the fact that you can feed it a music mix to work against opens up possibilities that are not available with Wave Rider, which can only listen to its sources in isolation.

As far as I'm aware, Wave Rider and Vocal Rider are the only two options for automated level riding — and if you're not running Pro Tools on a Mac, the latter is your only choice.

Quiet Arts' plug‑in can take a lot of the donkey work out of creating mix automation in Pro Tools.