This innocent-looking combination of preamp and compressor holds a useful surprise up it’s sleeve...

Canada’s Radial Engineering have a deservedly high reputation for well-designed, well-built, rugged products that produce excellent sonic results. I’ve usually found something in every Radial product to make me sit up and take notice, and their PreComp, a single-slot 500-series combination of mic preamp and feedforward VCA compressor, is no exception.

The mic preamp section is based on Radial’s proprietary Accustate circuitry, in which the gain control not only reduces gain, but also reduces the PreComp’s input sensitivity. This feature is designed to both maintain the optimum signal-to-noise ratio and to eliminate the need for a separate pad when dealing with high-level sources. With a high-pass filter at 100Hz, plus switchable polarity inversion and 48V phantom power, the PreComp’s input section has the essential facilities that you’d expect to find in any mic preamp.

The compressor section is also well set up. The threshold ranges from -35 to +15 dB, the ratio sweeps from 1:1 to 25:1 and the make-up gain gives you 20dB of boost or cut. Although the Slow/Fast switch sets the general nature of the attack time, the PreComp’s attack and release times are actually program-dependent, and so the compressor’s attack speed becomes more the determinant of whether or not the signal’s initial transients are compressed. At low compression ratios, the compression curve has a soft-knee response, which hardens up as compression ratios rise and compression changes over to limiting. 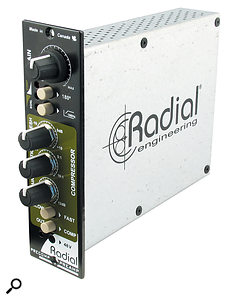 On their 500-series modules and Workhorse racks, Radial have expanded the facilities by adding their proprietary Omniport, which is slowly being taken up by some other rack manufacturers. This port utilises hitherto unused connectors on the 500-series rear-panel edge connector to add a TRS I/O jack that offers additional possibilities on units that implement this concept. In the PreComp, changing the unit’s rear-panel slide switch from the Normal to the Insert position enables you to use this jack to split the two sections to give both a separate output from the mic preamp and a direct input to the compressor. This allows you to insert (say) an EQ pre-compressor, or simply to use the two sections separately.

Metering on the PreComp comes courtesy of green, orange and red LEDs. The red LED that starts flashing at the approach of clipping is positioned at the unit’s output. The green and orange LEDs sit in the compressor side-chain just after the threshold detector. The green LED stays lit whether or not signal is present and when no compression is taking place, and only goes out (to be replaced by its orange companion) when compression is actually taking place.

In use, the PreComp mic preamp produces the clear and uncoloured performance that its published specifications suggest. The compressor is similarly transparent, and in a way its compression reminds me of the old and much revered Dbx 160. I particularly liked the way it handles vocals and acoustic guitar with a low ratio and a few decibels of gain reduction — but then I’m a sucker for that kind of sound. If you’re more into using compression as an effect then you’ll find that the PreComp will deliver much of that, but without ever going to any extremes.

However, I’m not quite convinced by the metering setup. Since the green LED is lit even if no signal is present, you’ve got no visual indication of what is happening at the PreComp’s output until clipping approaches and the red LED starts flashing. It’s a minor point but, to my mind, the metering would be more informative if the green LED took its feed from the output, so that you would have a positive indication of signal presence at that point.

Unlike on some of the 500-series compression-only products I’ve used, there’s no wet/dry blend control on the PreComp. However, a bit of creativity at the Omniport lets you take a feed from the mic preamp to give you an unprocessed signal to mix in with the compressed output from the PreComp. To allow this, what you need is a TRS-to-TS conversion jack lead, so that when the shorted tip/ring connection of the TRS jack is plugged into the Omniport, the signal can pass from preamp to compressor whilst at the same time feeding the tip of the TS jack.

When you think about it, a mic preamp/compressor combination like the PreComp makes a lot of sense because, except in a few situations, you’ll usually be compressing pre-EQ. At its price, the Radial PreComp is, to me, excellent value for money — especially if you have a Radial Workhorse rack. I think that very many musicians and engineers are going to find Radial’s PreComp an attractive option in recording and mixing scenarios where its high-quality, reliable, no-fuss performance will make a difference. Bob Thomas