It might not be glamorous, but Little Labs’ Pepper could save you a lot of time and unnecessary compromise.

Little Labs seem consistently to come up with solutions to those everyday problems that we’ve all had to spend studio time working around. The Pepper combines several of their existing approaches to interfacing DAWs, recorders and other balanced line-level units with electric and electro-acoustic guitars, effects pedals and guitar amplifiers in live, studio and re-amping environments. This amount of connectivity gives the Pepper its convoluted Pedal/Pro/Instrument Blender/DI/Re-amp designation — it’s one of those rare cases of a simple idea that’s too complex to encapsulate in few words!

Powered by a chunky external power supply via a heavy-duty locking connector (other manufacturers please take note), the Pepper looks a class act right down to its custom carry case. The front panel feels slightly crowded, as it carries the main input and output jacks alongside seven illuminated switches and three knobs but, provided that you can read the legending, you won’t have any difficulties.

The rear panel carries the PSU connector, the I/O jacks, a TRS jack for a twin footswitch (not included) plus a recessed, slot-headed screw that allows you to vary the factory-set 1MΩ instrument input impedance between 100kΩ and 2.3MΩ. This 1MΩ load, typical of most guitar amplifiers, can be switched to 10MΩ, a value that is ideal for piezo pickups.

After entering the Pepper, the input signal is buffered and then split into two electronically balanced parallel paths, each with its own level control. One path is the direct Instrument Thru and the other chains together two insert loops that can be independently switched in and out, either from the front panel or via the aforementioned twin footswitch.

Positioned before the chain’s balancing amplifier, the first loop, the Pedal Insert, has send and return impedances that are optimised for guitar effects pedals. The return jack can also be used as a second instrument input since the returning signal is buffered before being balanced and amplified to feed the balanced line-level Pro Insert loop. Unlike the Pedal Loop, the Pro loop has an send level control. Although this send sits inside the Pro loop, the Pro Return is positioned after the loop, and also acts as the overall level control for the insert path. The Pro Return can therefore be used, together with its Direct Thru equivalent, to set the relative loop levels going to the balanced summing amp that feeds the final output stage.

The take-off point for the transformerless line-level expansion output comes immediately after that summing amp, and this is followed by two output transformers (both modelled after vintage products from the now-defunct United Transformer Corporation), one of which provides the balanced microphone-level signal for the DI output, whilst the other supplies the front-panel unbalanced Instrument output with the correct impedance and level for driving a typical guitar amp.

As just a straight-through active mic/line-level DI and instrument interface, the Pepper’s overall sonic performance is absolutely excellent, due in no small part, I would think, to both the quality of the internal circuitry and the high-quality transformers on the microphone-level DI output and the Instrument Out. Varying the Instrument In’s input impedance via the rear-panel adjustment did make a subtle difference to the sound of my guitars, although I’m not sure that I’d want to readjust it for every change of guitar. 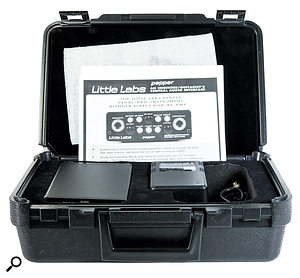 The Pepper comes in a robust plastic carry case, along with power supply and manual.The Pedal and Pro loops work exactly as advertised, and I had absolutely no problems when inserting units from my motley collection of unbalanced pedals and balanced line-level effects units into the appropriate loops. Using the loop chain as your main signal path allows you to mix in the dry signal from the Instrument Thru, making parallel processing simplicity itself. You can also use the Pepper to connect any guitar pedal across your mixer’s insert points or between one channel’s direct out and the input of a second. You could even use them, with a suitable audio interface, as ‘hardware inserts’ for your DAW. The Pepper’s manual, available online, explains all of this.

Little Labs have always supported the re-amping community, and the Pepper adds spice to their offerings. Inevitably, when re-amping, you’ll find that the output impedance and level coming from your recorder or DAW will not match the needs of a guitar pedal or amplifier. The Pepper covers the impedance issue easily with the Instrument Out transformer, and its solution to the level question is similarly simple, but its execution is slightly more involved. 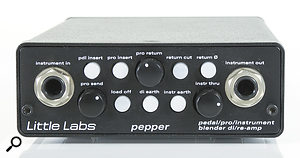 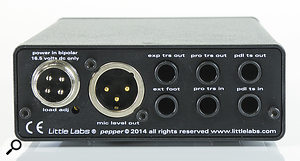 The solution involves the use of the front-panel level controls for Instrument Thru, Pro Send and Pro Return, plus the insert chain’s Return Phase switch. The answer relies on the fact that if one of two identical signals has its polarity reversed by 180 degrees, then their summed output will be zero. In the Pepper, provided that the loops are switched out, the two signal paths are identical so, by setting the Instrument Thru to its three o’clock unity gain position (I would have liked there to have been a detent here for absolute repeatability) and bringing up the level of the phase-reversed Pro Return to null the Pepper’s output, you’ll have ensured that the signal level from the insert chain is exactly the same as the output from your instrument. You can, with all pedals bypassed, use the same procedure for the Pedal loop, although you might have to adjust the Pro Return level if some of your pedals don’t have a hard bypass.

When you’re using the Pro loop with pro-audio effects units or when recording into a DAW or analogue recorder for re-amping, the same basic principle applies. Here you’ll have to adjust the Pro Send to suit the connected unit(s), and again, with effects units bypassed and any recording system in monitor mode, use the Pro Return level (if necessary) to null the loop output with the direct signal. One little quirk to be aware of is that, due to the unavoidable delays introduced by the A-D and D-A conversion processes, you’ll not be able to completely null out the analogue return signal from digital devices — but you’ll still get the right level by nulling for the ‘thinnest’ sound.

The Little Labs Pepper is a unique and extremely elegant solution to many of the little problems that can arise in the studio or on stage when you’re trying to interface electric and electro-acoustic guitars with the balanced connections of mixing consoles, pro-audio effects units, DAWs and analogue or digital recorders. Furthermore, being able to ensure that the levels going into the Pepper’s Instrument In and coming out of its Instrument Out are the same is essential to the success of guitar re-amping using real amplifiers.

The Pepper is not cheap but, considering what you’d have to buy instead to achieve the same thing, it is certainly value for money. It is perhaps not an essential for everybody, but would more than pay its way for anyone doing much work with guitars — and it’s definitely worth trying one if you get the opportunity.

I can’t think of any single unit with a similar spread of facilities and possibilities, however you could get the same result with a DI box and a dedicated re-amp box from the likes of Radial or Little Labs themselves, a few cables and a couple of mixer channels.

Combining several of Little Labs’ existing approaches to combining guitars, guitar pedals and amplifiers with pro-audio effects, DAWs and recorders, the Little Labs Pepper is a very effective solution to these interfacing issues. Intended also to make level-matched re-amping simple to achieve, even when using pedals and studio effects units, the Pepper lives up to its convoluted description.