With two thirds of a Radial channel strip available at this price, is there anything not to like?

I’ve reviewed a good few of Radial’s eye-catching, built-like-the-proverbial-tank offerings over the years, and every one has had a feature or facility that either solves a problem or makes engineering easier. When they entered the 500-series market back in 2010, Radial introduced two unique facilities, a switchable link between modules that dispensed with patch cables, and an additional, rear-panel Omniport TRS jack that utilised unused connector contacts to offer additional I/O, whilst remaining compatible with the rest of the 500-series universe. 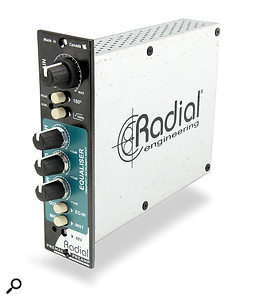 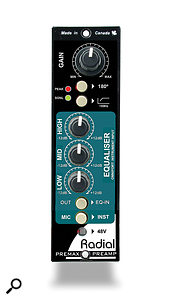 The company now produce a number of modules, one of the latest being the PreMax — a combination mic preamp and three-band EQ that, in an Omniport-equipped rack, can also act as an instrument preamp. As with all Radial units there’s plenty of metal on show, with a thick faceplate held in place by the retaining nuts of the steel-shafted pots. The switches are those you’d expect: mic/instrument selector, polarity invert, high-pass filter (at 100Hz), safely recessed 48V phantom power and EQ in/out, the latter allowing me to check just how badly I’ve mangled the signal!

Gain is handled by a dual potentiometer that controls Radial’s unique Accustate circuitry. This reduces input sensitivity as the gain is turned down, in order to ensure the optimum signal-to-noise ratio regardless of the signal level. Metering is via Signal and Peak LEDs that measure the level at the PreMax’s final output.

The three-band EQ is a comparatively old-school setup, but in my book it’s none the worse for it. In recent years we’ve become accustomed to having multi-band parametric and graphic EQ available, but it’s always salutary to remember that the vast bulk of the Beatles’ tracks were recorded on EMI REDD consoles with ‘only’ two-band EQ!

In use, the PreMax is simplicity itself and, as its quoted specifications suggest, it delivers a clean, clear sound that allows the source to pass through uncoloured. Although pictures on the Radial web site show a transformer in place, an internal check of the review unit revealed only empty space.

The three-band EQ is a complete pleasure to play with, and the tonal variety that can be wrought across the overlaps might surprise you if you’ve grown up more used to sweep and parametric EQs. Even the maximum 12dB cut and boost in each band plays its part in producing a gentle, musical-sounding EQ that doesn’t get in the way, but does encourage experimentation when necessary.

There aren’t many single-slot 500-series preamps with two-band EQ, let alone three-band, and that’s before you throw the attractive price into the equation. So, if you think of the PreMax more along the lines of a channel strip (as Radial encourage you to) it becomes seriously good value for money. Overall, it seems to me that the PreMax should appeal to the wide range of musicians and engineers who simply want a good job done well, done reliably and done without fuss. I think that it’s safe to predict that the PreMax will prove to be a pretty popular product. Bob Thomas