The Ultimate Bundle is a collection of 20 Sounds Of Revolution (SOR) sample libraries, all of which are the work of German sound designer Oliver Schmitt.

Oliver describes the collection as his “life’s work” and says that his aim was always to produce samples with lots of character and detail.

Together the libraries add up to an impressive 28GBs of content comprising over 17,000 samples. Most of the libraries can be opened as EXS and Kontakt instruments and there are REX and Apple Loops to play with in most cases, but the formatting varies slightly from one library to another.

Generally speaking, the product is aimed at dance music producers, but sound designers are also likely to find it a plentiful resource. Moreover, some of the drum samples are sure to get used for layering in rock and pop tracks wherever acoustic instruments are lacking bite or urgency. 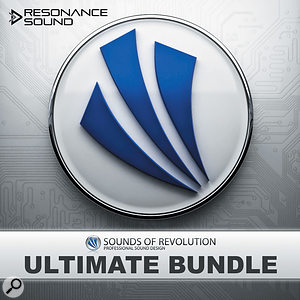 Some of the libraries in the Ultimate Bundle are part of a series. For example, there are four volumes of Minimal Techno Revolution, three of Kick Free Revolution and Clicks & Glitches and two of Abstract & Weird. The remaining eight libraries are unrelated.

Prime Kicks is a collection of thumping kick sounds, designed to put speaker cones through their paces. Dance music producers will certainly find them of interest, but so too will rock and pop producers looking to fortify their kicks with something punchy. Hats & Tops takes care of the other end with its collection of perky little loops and transients. Like the kicks, these hats and tops sound very familiar, and must surely have been created using classic rhythm machines and grooveboxes, or their virtual equivalents, albeit with a little extra processing.

Clicks & FX is notable for its interesting loops, which pop and click in various combinations and, in many cases, could form the basis of a composition.

Game and film soundtrack designers might find some useful material in the Transformation library. It is full of experimental downers, risers, shutdowns and strange futuristic sounds, most of which are crying out to be used in sci-fi soundscapes as well as high-energy dance tracks.

Although the price of the bundle seems high at first, dividing the figure by the number of libraries reveals that it is actually pretty good value. It may only deal with dance music, but it is not limited to just one sub-set of dance, and because Oliver created the samples over many years, they make a rather satisfyingly eclectic bundle. Tom Flint