The Tossover’s thoughtful approach to routing and filtering should leave your processing options limited only by your imagination.

Radial have a seemingly endless ability to design great products, to build them well and, more often than not, to come up with a little twist that sets their products apart from their competitors — products like this: the Tossover Variable Frequency Divider, which packs high-pass, low-pass and band-pass filters into a single-width 500-series module.

Designed to operate with line-level sources, the Tossover’s high-pass and low-pass filters both have an on/off switch, variable Frequency and Amplitude controls, and also feature selectable second-, third- or fourth-order filters that give slopes of 12, 18 or 24 dB/octave in each band. The final front-panel switch is common to both and places the two filters in series to produce a band-pass filter. The cutoff frequency for the high-pass section ranges from 140Hz to 7kHz, while that of the low-pass range is 80Hz to 4kHz, which gives a passband range of 80Hz to 7kHz in band-pass mode.

The signal entering the Tossover passes through the low-pass filter and then through the high pass. Since the two filters operate independently, a slide switch at the rear of the Tossover selects which one feeds the output XLR of your 500-series rack. You therefore need to decide which you’re going to be using before you start, although if you own a Radial Workhorse rack the balanced output of the unselected filter is always present on its Omniport jack. 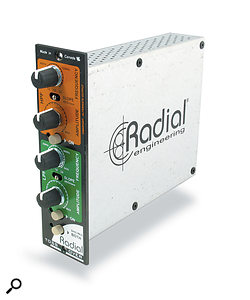 In the series band-pass mode, if you don’t have a Radial rack and you’ve got the high pass feeding the XLR, you can access the low-pass filter on its own by switching out the high-pass section. The only thing to remember is that, in this mode, only the high-pass filter’s amplitude control is active. Although the amplitude controls can cut the signal level to zero, they exist more to allow you to compensate for the loss in signal level that will inevitably occur when you take chunks of the frequency spectrum out of a signal.

Once you’ve got it rigged up, there’s a lot that you can do with the Tossover. Frequency-specific compression is one use that springs to mind: take a track, record additional high-pass and low-pass versions, compress those separately to taste and then mix back in a bit of uncompressed track if you’re into parallel compression. Another idea might be to high pass a vocal track, give the result a touch of distortion to add character and mix it back into the original. In the time domain, you could create an interesting effect by adding chorus to the high pass and flanging the low pass, to give yourself a pseudo rotary-speaker sound, and there’s a lot that you could do with different reverb levels or delay times on a band-passed track. All three modes also enable you to alter the balance of areas of the frequency spectrum within a track, which is often useful when you’re trying to tailor an instrument to sit in a specific slot in the mix.

All in all, I found the Tossover to be a great source of ideas for sonic exploration. I happen to own a Radial rack, so having the separate filter outputs available made experimentation slightly less complex than might have been the case otherwise. Having said that, by the time that I’d got variously filtered versions of tracks recorded, compressed, effected and mixed, the time saving was probably fairly minimal.

This unit isn’t going to be for everyone but, for my money, having a Radial Tossover or two around the place is going to be a worthwhile and inspirational investment. Bob Thomas