The DI box is a crucial but often-overlooked part of many signal chains - and, as we found out, it really is worth investing in quality. 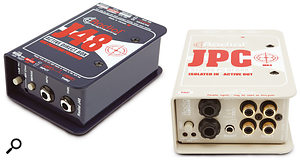 Photo: Mike CameronWhenever I am asked to recommend a DI box, my stock answer is normally either the BSS AR133 or the Canford Audio (formerly Theatre Projects) designs for active applications, or the EMO range for passive solutions. The reason? Simply that I have used these designs throughout my professional life and have never been let down by them, ever — in horrifying contrast to many other, notably cheaper designs that have passed my way over the years.

However, it was pointed out to me recently that although my happy experiences were largely restricted to British manufacturers, other reputable manufacturers of DI boxes do exist, so perhaps I should broaden my horizons a bit! It was a fair point, and to that end I recently received a large box full of various 'DI solutions' from Canadian manufacturers Radial Engineering.

This company has long held the same kind of reputation in the US and Canada as BSS, EMO and others have in the UK, and Radial DI boxes are the first port of call for many as a result. My only experience of them before now has been to see the solid-looking boxes displayed at trade shows, so I was keen to try them out for real.

The first device to emerge from the packing box was the J48 Active Direct Box, a very nicely engineered, heavy, 14-gauge steel unit with a tough, baked-enamel paint finish. A rubber pad covers the entire underside, to prevent the device moving around, and for electrical isolation, thus helping to avoid unwanted ground loops. The case is constructed as two interlocking 'U' shapes, with the inner section housing the electronics, switches and connectors, and the slightly larger outer section providing protection for them, thanks to its 'book end' overhangs, top and bottom. The whole thing weighs a surprising 1kg (2lbs) — so a good description of this box would be 'solid'!

One end of the box carries two quarter-inch input sockets, two buttons and an LED. The last can be made to flash to indicate the presence of phantom power (this unit must be phantom powered, as there is no standard provision for an internal battery). Although every active DI box I've ever come across (until now) has had the ability to use a 9V battery, I've always used phantom power simply because it is far more reliable. So I'm not in the slightest concerned about the absence of a battery holder in the J48. Furthermore, the lack of a battery access panel makes the unit stronger. There is also no risk of a dying battery leaking gunge into the electronics, and the space saved can be used for more useful facilities instead!

Perhaps even more importantly, because this Radial unit was designed without the compromise of a 9V battery power supply in mind, its internal power rails are actually rather higher than usual, endowing it with far greater headroom than most active designs. So active guitar pickups won't trouble the J48, and you won't suffer increasing distortion halfway through the gig when the battery starts to run down!

Having said that, a simple modification can apparently be made to incorporate a 9V battery if you really must, and details are available from Radial. I'm sure they'll also send the men in white coats to bring one of those lovely long-sleeved jackets around with the battery modification instructions...

The two buttons on one end-panel provide a 15dB input pad and activate the 'Merge' facility. This is a really useful idea that extends the flexibility of the DI box beyond that of most others. Normally, the two quarter-inch sockets provide the usual input and loop-through facility from a guitar to a guitar amp, but if the Merge button is pressed the two sockets can be used to accept a stereo line input instead, with the left and right channels being mixed together resistively (not just paralleled). This will be useful for keyboards or stereo effects units when you're running out of channels on the desk. 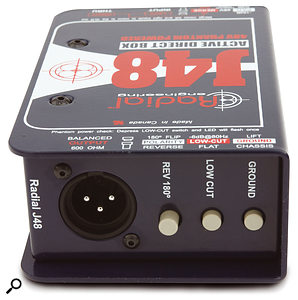 The output end of the J48. As well as the usual XLR output and ground lift there's a polarity-reversal button, which is useful for those who lack this facility and want to combine DI and miked guitar sounds.Photo: Mike CameronThe other end panel of the box incorporates the mic-level XLR output socket and three more push-buttons, which provide a ground lift, high-pass filter, and polarity reversal (the last will be useful for those using consoles without polarity-reversal facilities, who also want to combine DI and miked guitar sounds). The high-pass (low-cut) filter turns over at 80Hz, but the slope is not given in the manual. Pressing this button also confirms the presence of phantom power (via a flashing LED on the opposite panel, as mentioned above). The designers decided not to light the LED continuously, as this avoids unnecessary loading of the phantom power supply — far better that the small amount of available power goes into the active electronics, rather than illuminating the top of a guitar amp!

The ground-lift button does exactly what it suggests — breaks the ground connection between input and output to avoid ground loop hums. Simpler boxes can achieve this simply by isolating pin 1 of the output XLR, but because this box relies on phantom power, and the XLR ground provides the return current path for this, a more sophisticated approach is required. There is a small transformer inside the DI box case, but this isn't the traditional output transformer. Instead, it forms part of the DC-DC power converter, and that is where the ground isolation is achieved. The converter runs at about 140kHz — higher than many — and although noise at such a high frequency could be a problem (if it should 'beat' with some other high-frequency signal to produce an audible side-tone), in practice I didn't notice any problems at all.

The audio output is driven actively and symmetrically, by the familiar NE5532 chip, which is socketed for easy replacement (just in case you connect the J48 to something nasty and bad things happen to it). An LM833 FET op-amp handles the input side, providing a 270kΩ input impedance. This is a lot lower than many designs, and the impedance halves again when the 15dB pad is engaged, but I didn't notice any ill effects in use, and no guitars players complained about it at all, so it would seem to be high enough!

All the switches have a solid, reliable feel to them, and the handbook claims they are engineered specifically to provide a long life, with minimal pops and clicks. The double-sided circuit board inside the box is well made: high-quality components are used throughout, and everything is mounted very solidly. All in all, I would be confident that this box could take the abuse of life in a gig bag very easily, and it should provide a lifetime's service.

Technical specifications are just as impressive as the box's appearance and ergonomic design. The bandwidth extends from 10Hz to 160kHz (the advantage of no output transformer) and is flat within 0.5dB to well beyond 20kHz — specifications which even my previous favourite BSS model can't match! The lack of output transformer also enables the distortion figures to be rather lower than most, especially at the low-frequency end: the J48 boasts better than 0.002 percent distortion across the entire 20Hz to 20kHz range, whereas most similar products are about ten times worse at mid- and high frequencies, and up to a hundred times worse at 20Hz. Similarly, the phase shift at low-frequency and high-frequency extremes is far less than most active DI boxes, as is intermodulation distortion (again, this is largely because of the absence of an output transformer). Yet the signal-to-noise performance is within 4dB of the BSS, and the absolute noise floor is substantially lower. 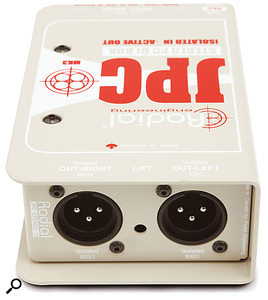 The JPC would be useful for those who want to use laptops or iPods on stage, enabling a clean-sounding signal to be obtained from the headphone output.Photo: Mike CameronIncreasingly, musicians are using computer laptops at gigs for backing tracks and virtual instruments, but picking up the audio directly from a headphone output often results in nasty ground-loop hums and buzzes.

The Radial JPC stereo computer DI was designed to overcome that problem, and it does so very well. I've been using it recently to interface my laptop with a sound system to play high-quality audio demonstrations during technical lectures, with great success.

The box is the same shape and size as the J48, and constructed in the same way. The output end carries a pair of male XLR sockets, and phantom power is required on both lines. A recessed ground-lift button is normally activated, but can be switched out if required. The input end has a comprehensive range of socketry, plus a pair of LEDs which light to show when phantom power is present on the output cables, and a button to select a 15dB pad.

In use, I couldn't fault the JPC at all. It was able to accommodate high-level signals from the laptop without any signs of strain, and even with the laptop running from its mains supply I had no problem at all with the typical whistles and buzzes that plague so many laptop-based playback systems. I highly recommend it.

The sheer solidity of the J48 inspires massive confidence that it will get the job done, and it didn't fail to impress when I put it to the test. The sound quality is noticeably more open, clean and transparent than cheaper DI boxes, and even the old (expensive) stalwarts of my collection failed to keep up much of the time, which came as something of a shock to me! When driven hard, the J48 stays clean and bright and just passes the loud signal, whereas all the other designs I had available started to sound strained and gritty — and, in one case, clearly distorted.

The Merge facility worked perfectly on a drum machine and a variety of keyboards, while the pad switch even enabled a professional CD player to be accommodated with ease. I used the low-pass filter on a couple of occasions, and it seems to have a well-chosen characteristic that suits acoustic guitar pickups well.

I only suffered a ground-loop hum on one occasion, but flicking the appropriate switch on the J48 cured it instantly, with no obvious audible side effects.

The Radial J48 is rather more expensive (in the UK at least) than my old favourites, like the BSS AR133 or the Canford Active DI Box. However, I am mightily impressed with the J48, and its obvious performance advantage is such that the extra cost is easy to justify for anyone who simply must have the best. In fact, given that a DI box of this quality will easily last for more than 10 years, I don't think the average of £1 a month is excessive, and I'll certainly be reaching for the credit card now that I've finished writing this review!

A very solidly engineered active DI box that takes a fresh approach to the age-old problem of interfacing electro-acoustic instruments.