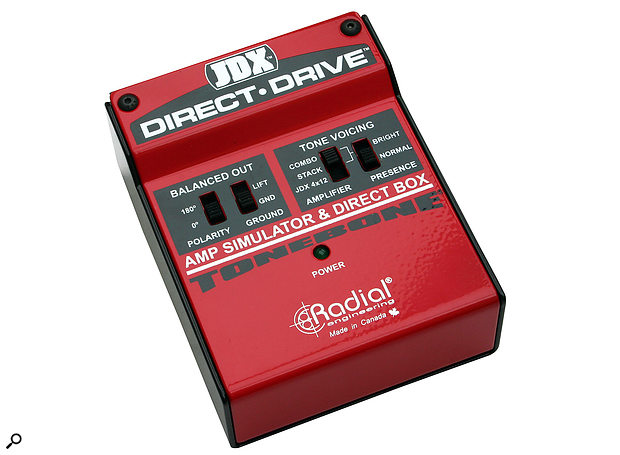 Designed to allow the guitarist to produce familiar amped tones without the need for an actual amplifier, Radial’s ToneBone JDX Direct Drive emulates the tonal coloration of a guitar amplifier/speaker combination and would typically be used at the output of a pedalboard. Its all-analogue design includes no variable controls or overdrive modelling so it isn’t an amp modeller in the traditional sense — it is clearly designed to be used in combination with your existing pedal setup.

Built into one of Radial’s typically tank-like folded-steel enclosures, the box sports four rear-panel jacks and a balanced XLR DI output. There’s also connection for an optional 9V PSU, with a useful cable clip alongside. (Phantom powering is not supported.) The four jacks handle the unbalanced input, an unbalanced output, a thru connection and an extra buffered feed for a tuner. On stage that means the XLR output could, for example, feed the PA and the thru output an on-stage amp. Alternatively, the unbalanced output could feed a powered monitor to provide amp emulation, so there are lots of options whether you use a guitar amp or not. There are also the obvious recording applications.

Though there are no variable controls, a pair of slide switches can be used to select the overall voicing of the JDX Direct Drive. We’re told that the JDX 4x12 option is modelled taking the sound of a Shure SM57 mic set up in front of a Marshall 4x12 cabinet as a template, with Combo or Stack options (based on an early Fender Twin combo and a vintage Marshall amp) available via the left-most three-position Tone Voicing switch. Further changes may then be made using the right-most switch to bring in Presence, adding more edge to the sound. Polarity-invert and ground-lift switches are also fitted in the Balanced Out section, and a central power LED shows that the unit is operational.

The three voicing switches serve up noticeably different sounds, with the JDX 4x12 setting having the most low end and the combo the most brightness. That Presence switch adds a welcome edge to the sound and, although the results may lack the detail of a convolution-based speaker emulator, the overall effect is generally convincing and can be tweaked using additional EQ where needed. Being a DI solution, the results do sound unnaturally dry unless some reverb or delay is added, but that’s to be expected. Clean sounds come across as very amp-like with little additional work, whereas overdriven sounds may require more finessing, but the circuitry is successful in removing those unnatural gritty highs. Overall, the JDX Direct Drive compares well with other all-analogue speaker emulators on sound, and it also functions as a very high-quality DI box and signal splitter, all built to the high standard we’ve come to expect from Radial.