Like the rest of Radial's Tonebone range, their PZ Pre acoustic instrument preamp is built into a heavy, two‑piece, metal case. The designers haven't sacrificed anything for durability, though, as it appears both sleek and compact. There are two instrument‑level inputs, with a switchable buffer to allow a cleaner signal for passive piezo transducers, as well as active. Each input has its own level control. 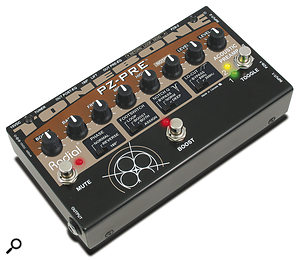 A recessed switch on the side determines whether the two level controls simply set the level of each guitar, or are setting a mix between two instruments (acoustic guitars, banjos, cellos and so on), which can then be routed to a single amp. Each input has access to all of the remaining features on the Tonebone, the next of which is a low‑cut filter that can be set at 80 or 200 Hz, or can be bypassed. For solo or duo performances, having a low‑cut filter available without going though a mixing desk can be very useful.

The pedal includes both a notch EQ, and a 'phase flip' (polarity-invert) facility. As is the norm with Radial, they've added a selection of options to the notch: you get a bypass and a sweep, as well as 'normal cut' and 'deep cut' options. A slightly more unusual feature is the function selector for the boost toe‑switch. It can serve as a toggle switch for the effects loop, or for the variable boost control found on the left‑hand side of the pedal. It's also able to activate both functions simultaneously.

The remainder of the top row of rotary pots on the PZ Pre govern the fixed‑frequency high and low shelves, and there's a mid‑range control. Radial describe the last as 'semi-parametric', but having a frequency‑sweep pot with a cut and boost control but no control over the Q makes it a 'swept mid' in my book! Pedantry aside, it's a good‑sounding and useful EQ that only enhances the tone of an otherwise transparent‑sounding acoustic stomp box. The low‑shelf frequency is high enough to add noticeable warmth to the sound, even when the low-cut filter is engaged, and the top end adds a sense of air and clarity.

The advantage of the swept mid is that it's easy to find the type of acoustic sound that works for your taste. I always prefer to bring out the body and warmth of the instrument to make it sound full, but many players like a nice, bright attack that will cut through in a mix. Both variations are possible with sensible use of the cut function.

The PZ Pre is not just a versatile problem solver: it is capable of bringing out a variety of flavours in your instrument. You can get very specific with the mid‑range control and still have the ability to boost or cut the low and high ends for more general tone‑shaping. It's also worth noting that the notch control is narrow enough that it can be effective in taming resonances and feedback without being too detrimental to any strong EQ choices that may have been made.

As if the 'basic' feature set of the PZ Pre were not enough, Radial have also managed to include, in addition to the two inputs and effects loop, four separate and different outputs. On the left is an instrument‑level output to go into an acoustic combo, and on the back there's a pair of balanced outputs — one that's pre-EQ, which could serve as a front-of-house or tracking send, and one post-EQ, for an artist monitor send. Both of the balanced outs are subject to a recessed polarity‑invert button, which is independent of the one I mentioned earlier (which still affects the jack outputs), and an earth lift that affects pin 1 on both outputs. All three of these outputs can be cut by the mute switch, leaving only the tuner output (yes, there's one of those too) active for silent on‑stage tuning.

This is a practical, well thought‑out and well-built acoustic guitar preamp, with all the 'tools' you could require, and a quality EQ section to boot. I challenge anybody to use all of the features built into the PZ Pre at a single gig, but it's certainly nice to have pretty much every requirement covered! James Dunkley