Using headphones is, for many, a daily necessity to avoid disturbing partners, neighbours and work colleagues. However, the task of driving modern high-quality headphones is not trivial, and most headphone amplifier stages in computer soundcards and budget MP3 players leave something to be desired in terms of quality. Of course, there are plenty of very high‑quality headphone amplifiers on the market — I tend to use either the Benchmark DAC1 or the Grace Designs M902, for example — but such devices are both expensive and bulky. 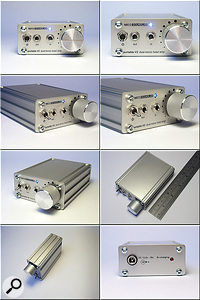 Neco Soundlab is a 'boutique' manufacturer (selling only through eBay), of a neat little battery‑powered headphone amplifier that suits the pockets of those with budget restrictions, while still being able to please their ears! The Portable V2 Dual Mono Headphone Amplifier is intended to accept the signal from a computer soundcard or other modest source, and amplify it using a pair of high-precision AD8610 JFET op‑amps. It's intended for use with headphones between 32Ω and 300Ω impedance. Our review model is housed in an extruded anodised-aluminium case measuring 63 x 30 x 105mm (WxHxD, including the knobs and sockets), and although the review model had no panel labelling, retail versions are very clearly and neatly labelled.

The front panel carries an on‑off toggle switch, a pair of 3.5mm jack sockets (for input and output) and a volume knob. There's a blue LED that illuminates when the unit is powered. The rear panel carries a coaxial charging socket and associated red LED, and a suitable 12V DC wall‑wart power unit is included for recharging the battery.

Internally, the unit is neatly wired, with the two AD8610 op‑amps (one per channel) mounted on sockets. (This op-amp is a low-noise, low-distortion design with a very fast slew rate, and is highly regarded in hi‑fi circles.) The review model was fitted with a 9V rechargeable Ni‑MH PP3 battery mounted across the width of the PCB, although a 500mA Lithium Ion battery is available as an option, which Neco say can power the device for up to 50 hours. The audio circuitry is, inherently, very simple, with a variable ALPS input attenuator feeding the op‑amps, which are configured for a fixed 11.6dB of gain and drive the headphone outputs directly. The internal battery supply avoids any potential for mains‑related PSU noise, and a TLE2426 precision rail splitter generates an accurate bipolar supply for the op‑amps, supplemented with Wima and Panasonic local decoupling capacitors.

I tested the Neco unit mostly using AKG K702 and Sony MDR 7509HD headphones, although I also tried various other, less expensive models, including Beyerdynamic DT231s, AKG K240s, Sennheiser HD280s and Shure E3 in‑ears. The V2 headphone amp was able to cope with them all extremely well, delivering high‑quality sound with plenty of volume that was a significant step up from typical laptop headphone outputs.

The bottom end was detailed and tight, the mid-range spectacularly fast and precise, and the top open and airy. Testing the unit with an Audio Precision system, the THD+N and SMPTE intermodulation figures were very good, scoring ‑107dB (0.0004 percent and mostly third harmonic) THD+N for an input of ‑3dBu, with the volume control at maximum. Higher input levels can be accommodated by turning down the volume control, of course. Harmonic distortion rose significantly above that level, with gross overload occurring at around +10dBu, so it would pay to be a little careful with the output level of the audio source. The frequency response is ruler flat from 10Hz to over 40kHz, and crosstalk is better than 90dB.

The only negative comment I can level at this Neco headphone amplifier is that there's no real clue as to the state of the battery… other than some quite nasty distortion on peaks when the battery nears depletion (I thought I had a defective set of headphones for a while!). However, if you're looking for a decent headphone amplifier that doesn't break the bank, you could do a lot worse than consider the Neco Soundlab.