A decent DI box is a must-have in everyone's recording toolkit. There are countless DI boxes, and prices vary widely, but to me it makes sense to invest in a 'high-end' model, since the quality and reliability will be beyond doubt, and as it will last a lifetime, the amortised cost will not actually be that high. Arguments range as to the relative merits of active and passive designs. Both have their strengths and weaknesses, but I generally favour active units for electric guitars, and passive ones for powered keyboards and active basses. 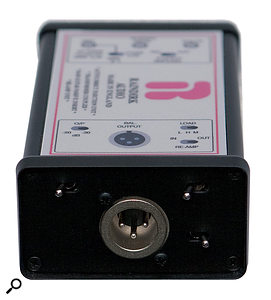 The output (left) is via a male XLR, and (right) the other end of the DI box includes jack sockets for active input, direct output and passive input.Guitarists and engineers looking for the ability to 're-amp' a clean DI'd guitar recording usually require a separate device in addition to the DI box, although in some cases a passive DI box can be used 'in reverse'. However, Cyril Jones, the ingenious designer behind the famous Raindirk line of recording consoles, and also an interesting range of stand-alone console modules (his RM6 and RM4 are reviewed elsewhere in this issue), has created a very clever all-in-one device that serves as both active and passive DI as well as a re-amp device.

The Raindirk Active DI Box, housed in a black aluminium case, is about the same size as most DIs. The active electronics cannot be battery-powered (it requires 48V phantom power) and there's no power-present indication. The end plates have a few more sockets and switches than most such boxes, and the toggle switches extend slightly further than the protective bezel surround, making them easy to operate but potentially prone to damage.

Unusually, there are no legend markings on the end panels, but there are detailed labels on the top (illustrations of both end plates to identify the connector and switch functions) and bottom (a block diagram, some specifications and instructions). These labels are essential, as this DI box is not as straightforward to use as are the majority: its fantastic flexibility comes at the price of needing to have your wits about you when using it!

When used as a straightforward active DI box the guitar is plugged into the 'active' input socket, which presents a load of about 4MΩ, thanks to a FET buffer amp. A 'ground couple' toggle switch connects the input socket sleeve with pin 1 of the output XLR if required. A second socket provides a direct output which can be derived with another toggle, either directly from the input socket as a true 'link through', or as a buffered output from the FET amp's output. 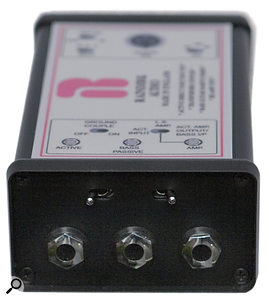 All the information you need to use the DI box is provided on labels on the top and bottom panels.An unusual facility is the inclusion of a second 'Bass/Passive' input socket, which is wired into the signal path between the buffer amp and the DI box's isolation transformer. When something (like a bass guitar!) is plugged into this socket, the buffered input signal is interrupted and replaced with the new signal, which feeds the isolating transformer directly. In this way, the device can be used as a passive DI box, which is a very handy feature. A three-way toggle switch on the output panel allows the passive input impedance to be set at 180, 150 or 100 kΩ. The output comes via a male XLR, and is normally stepped down through the transformer by 20dB relative to the input, but flipping a toggle switch adds a further 10dB of attenuation.

I ran a few bench tests using an Audio Precision Analyser and was impressed to find that the isolating transformer coped with levels up to +20dBu on the (passive) input without any obvious saturation effects, distortion or bandwidth limiting. Clearly, this is a very impressive transformer! The FET active stage isn't quite as tolerant (which isn't surprising), but it's extremely transparent for inputs below -10dBu, manages less than 0.1 percent distortion up to +12dBu, and doesn't finally clip until about +18dBu. The frequency response is ruler-flat from 8Hz to well over 75kHz, and the signal-to-noise ratio for the active input relative to +18dBu is an impressive 108dB, making it only about 7dB noisier than the passive input.

These are impressive specifications, and reflect the sound quality in use too: this is one of the most transparent and neutral DI boxes I've ever used. It coped with everything I connected without any trouble at all, and the passive impedance options allow a useful degree of tonal shaping.

In re-amping mode, this box essentially operates in the same way as a passive DI box used 'backwards'. The line-level output from the DAW is connected to via the male XLR, sending the signal into the output socket, and will therefore require an XLR adaptor or a suitable adaptor cable in most cases. Another toggle switch provides about 30dB of additional input attenuation, should this be required to prevent overloading the isolation transformer with a hot line-level source (such as the direct output from a D-A converter running at peak levels). With the 're-amp' switch off, the signal appearing at the passive 'output' socket is about 20dB louder than the input level (thanks to the step-up of the isolation transformer). With the switch on, the level is about 10dB quieter than the input.

If required, a second parallel re-amp output can be found at the link-through socket, although the associated switch has to be in the 'active' position for this to work. It's also probably a good idea to connect the guitar amp to the appropriate DI box socket before plugging in the input signal from the DAW to the XLR, as doing so avoids the possibility of sending a high line-level signal into the output of the FET stage, which probably wouldn't enjoy the experience!

As is always the case with Raindirk designs, a clever and elegant engineering approach has been taken to deliver a great deal of versatility in a small and convenient box. Putting my nit-picker's cap on, it would have been more logical had the ground-lift switch been on the output panel and the passive input-impedance switch on the input panel, and perhaps a TRS socket could have been included on the output panel (there is space) for the re-amp input signal. Like the exposed toggle switches, though, these are minor points.

This is a clever and very well engineered multi-function DI box with an exemplary technical performance. It is, by any standards, pretty expensive (it costs about as much as buying separate boxes for each function) but given its phenomenal technical performance and the convenience of having an active or passive DI or re-amp device in one box, the value for money becomes more readily apparent. Hugh Robjohns