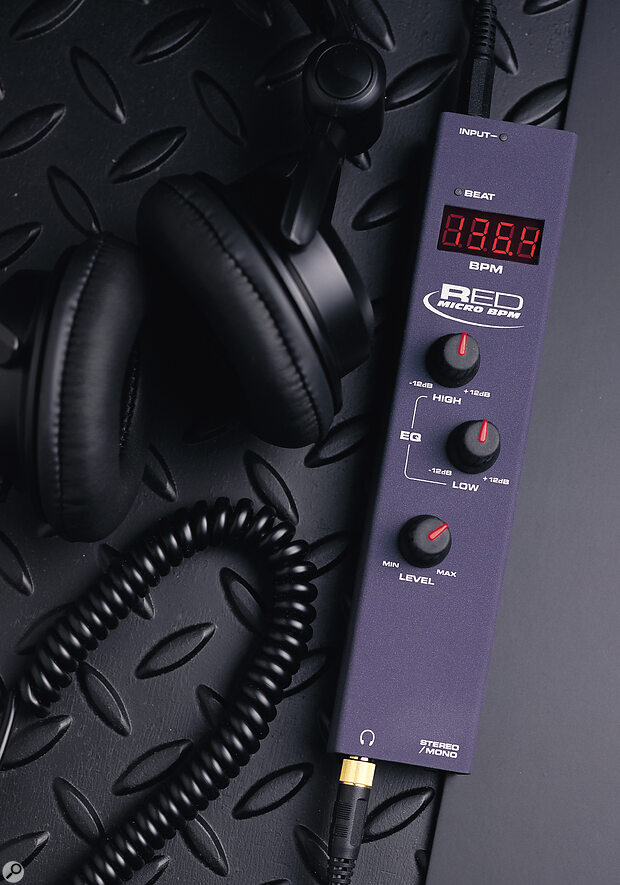 If you saw our review of the Voyager 1 Beat Extractor in the Feb '98 issue, you'll already know what to expect from the Micro BPM — a readout of bpm (beats per minute) derived from an audio input. However, where the more expensive Voyager 1 provided twin channels, and a MIDI Clock out to drive a MIDI sequencer, the Micro BPM (as its name suggests) strips things down to provide a lower‑cost unit with only basic bpm readout, along with a powerful headphone amplifier.

The Micro BPM has a strong metal casing with an elegant rubber 'flock' finish. On the top panel are sockets for audio input (3.5mm stereo jack), and for the line‑lump mains power supply. On the front panel (from top to bottom), are a multicolour input level LED, a Beat LED, and a bright red, four‑digit bpm display. The rotary headphone controls beneath this are for Level, High EQ (+/‑12dB at 6.5kHz) and Low EQ (+/‑12dB at 100Hz). On the bottom panel is a headphone output (quarter‑inch stereo jack), and a small slide switch to switch this output between stereo and mono.

Using the Micro BPM is simplicity itself — using the supplied quarter‑inch stereo jack to 3.5mm stereo jack lead, you connect it to a headphone or line output on your mixing desk, and then adjust the level at the input for optimum bpm tracking. Once a suitable signal is present, lock‑in time was normally about two seconds from a standing start. A four‑digit readout of bpm is displayed (90 to 180bpm, accurate to 0.1bpm), and the Beat LED flashes on each downbeat. The Voyager only had three digits, and so could not display fractions of a bpm as the Micro can. After lock‑in, the display will still continually update its tempo reading, and even if the music drops its rhythm temporarily the 'beat hold' function will keep the display readout and Beat LED operational for another ten seconds (to cope with short breaks in the music).

The bpm‑counter engine is taken from the more expensive Voyager 1, and works well on material with strong bass and snare drum, but stray far from dance and rock territory and it finds it difficult to cope. After a sudden change in tempo, moreover, it took anything up to 30 seconds to readjust, while it desperately waited for the original tempo to continue. A reset button would have been useful to force it to restart in this situation.

For four‑on‑the‑floor dance beats, this little box will quickly lock in and provide an accurate tempo readout. The headphone amplifier is powerful, and the Level and EQ controls are useful. At half the price of the Voyager 1, the Micro BPM fulfils a useful function, but is far less exciting, since there is no provision to lock to MIDI. However, if the excitement is already in the music, and you just want to know how fast it is, then the Micro BPM is a neat and cost effective way to find out. Martin Walker