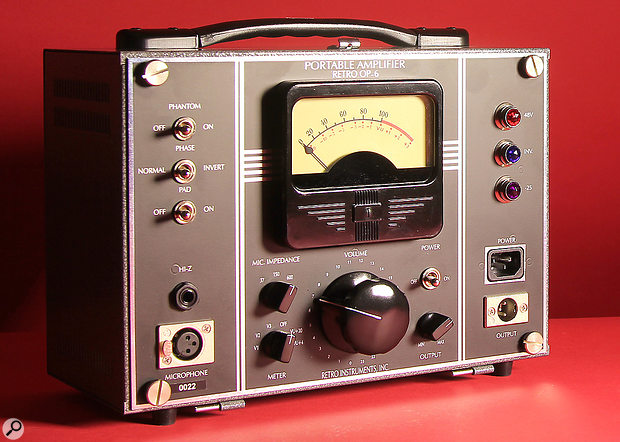 Vintage RCA OP-6s go for silly money — if you can find them. Can this Retro recreation justify a similar price tag?

American manufacturers Retro Instruments mostly build updated replicas of recording equipment from the ‘40s, ‘50s and ‘60s. Founded by Phil Moore in 2006, the company’s first product was a re-imagining of the classic Gates Sta-Level compressor (http://sosm.ag/retro-sta-level), followed by the UA 176 vari-mu compressor/limiter (http://sosm.ag/retro-176). The latest Retro addition is the OP-6 Portable Amplifier, based closely on the highly revered RCA valve preamp of the same name.

Since modern recording engineers have a rather wider microphone palette from which to choose, Moore has extended the original’s features to include variable input impedance, 48V phantom power and a direct instrument input. All are modifications no self-respecting equipment collector would dream of imposing on a vintage RCA OP-6 but which are very necessary in today’s studio. They’re incorporated very sympathetically here and the Retro OP-6 still closely models the RCA original internally and externally, right down to the steel ‘laboratory case’ with hammer-paint finish and removable lid.

While the circuitry is based on the original RCA design, Moore has taken the opportunity to bring the performance closer to modern standards without losing the massive headroom, high gain, and rich tonality for which the OP-6 is famed. Key amongst these tweaks is the use of paralleled secondary valves on both the input and output stages to improve the noise performance. Those who were hoping for a more authentic recreation of the RCA sound are able to remove these additional valves so that the unit operates exactly as the original did.

An XLR is provided for the microphone input, along with a quarter-inch TS socket for instruments (with automatic switching when plugged in). The huge stepped gain control knob (calibrated from 0-23), is flanked by an input impedance switch (marked 37, 150, and 600 Ω), a power on-off toggle, a rotary output attenuator control, and a six-way rotary switch. This last selects what is displayed on the VU meter from the condition of each of the three valve stages, two audio level calibrations (0VU = +4dBu or +20dBu), and an off position. 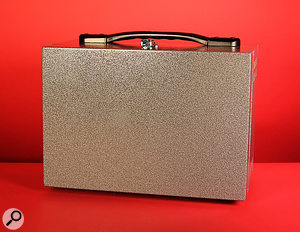 Like the original, the OP-6 is built into its own metal carry case, the front panel of which is hinged but also fully removable.The only indication that the unit is turned on is a dim glow from the VU meter. Mains power is connected via an IEC inlet, and the internal universal supply accepts either 115 or 230 V AC, although the IEC inlet has no markings to tell you this, or regarding its classification. (There are also no CE or other type-approval markings anywhere on the unit, all of which are a legal requirement in the EU!) The audio output is via an XLR.

Bench tests using an Audio Precision system revealed the maximum gain to be 72.5dB and the minimum -4dB (both with the output attenuator at maximum). The majority of the gain control’s steps increment in roughly 2dB steps. Interestingly, the pad doesn’t work for the very lowest gain-control position, but applies around 28dB of attenuation for all other gain settings. With a gain of 60dB and an output level of +4dBu, the THD+N figure measured 0.3 percent and the signal-to-noise ratio was -62.4dB. When driving a 600Ω load, the frequency response is ruler flat between 50Hz and 10kHz, but rises slightly at both ends of the spectrum to reach +1dB at 35kHz before plummeting above 40kHz, and +2dB at 12Hz. With a high-impedance destination (the AP presents 200kΩ) both the output level and the response peaks increase by about 3dB. In practice, this means the OP-6 will tend to sound a little brighter, and potentially exaggerate subsonic signals when connected to equipment with unusually high impedance inputs. 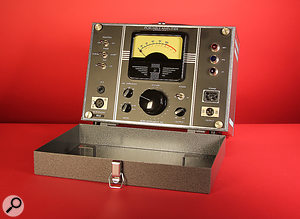 Measuring the three input-impedance options with an NTI MR-Pro, I found values of 42, 150, and 580 Ω, all of which were close to the values of the panel markings. The pad switch increased the input impedance to 2.5kΩ, regardless of the front-panel impedance setting. Phantom power measured 47.1V, which is comfortably within specification. The maximum output is +18dBu (by +19dBu THD reached three percent), while the maximum mic input level is +12dBu, with the pad switched in. The maximum gain for the instrument input is +55dB and the minimum is -15dB. The pad switch doesn’t work for the instrument input, and the maximum input level is +8dBu (for three percent distortion).

The Retro OP-6 is a well-built and cleverly updated recreation of the RCA original. It has quite a crisp and clean sound character combined with a rich, full bottom end. There’s no denying that the Retro OP-6 is noisier than modern solid-state mic preamps but that’s to be expected, and it doesn’t really get in the way of the character when used for strong sources like vocals or guitar amps. Perhaps more importantly, this is a preamp that can be pushed and abused to dial-in nice musical distortions, if desired. I found it added a very appealing warmth and richness to the sound of any mic — but I particularly liked the way it complemented my AEA ribbons!

However, at its current street price (never mind the list!) the Retro OP-6 is fearsomely expensive for what, at the end of the day, is a single-channel preamp with minimal facilities — albeit a beautiful, high-quality one; I can’t think of a more costly alternative. Having said that, original RCA OP-6s are so rare that the cost of finding and refurbishing a vintage unit would probably end up much the same, and it would still lack all of the Retro unit’s modern conveniences (and improved noise performance). And it still won’t fit in a rack! Phil Moore has done a very nice job indeed with this clever re-incarnation, but it’s probably not something mere mortals can justify.

Although this is the only game in town if you want an OP-6, there are plenty of homages of vintage preamps on the market and I can’t think of one that’s anywhere near as expensive as the Retro OP-6. Moreover, there is a considerable range of highly regarded, high-end vintage and modern mic preamps — mostly two-channel and some with EQ facilities — available for a similar outlay... and most will fit in the rack! 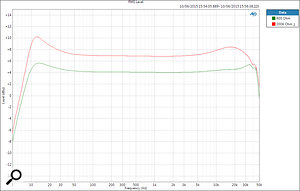 The frequency response results of the Retro Instruments OP-6, as measured using an Audio Precision Analyzer.The original RCA MI-11202-A Remote Pickup Amplifier Type OP-6 is an iconic preamp design, although far better known in the USA than in Europe. It was designed as a ‘carry-in’ location-recording mic preamp for radio broadcasters (hence the metal case with a carry-handle on the top and a removable lid) but a leather shoulder strap allowed truly mobile operation when the battery power supply (also shoulder-carried) was used!

Designed primarily for use with ribbon microphones, it featured two switch-selectable microphone input connectors, one on a Cannon P3 socket and the other on screw-down terminals under a metal shielding cover. The output was presented on binding posts under another shielding cover for the line connection, plus a paralleled quarter-inch socket for monitoring (high-impedance) headphones. The OP-6 had an internal mains supply, and either AC mains or the DC supply from the battery box connected via the same multi-pin socket!

Operational controls were limited to a small rotary switch to select the appropriate mic input connection, a huge rotary gain control, and a toggle switch for the power. An optional and very large VU meter kit could be installed above the gain control, and chunky thumb-screws in each corner allowed the front panel to be removed to access the electronics inside.

The internal circuitry was quite elaborate for the time, with a transformer-balanced input feeding an amplifier chain of three 1620 or 6J7 ‘metal’ pentode valves. These were configured in a single-ended arrangement with an unusual choke-loaded transformer-balanced output. Choke-loading essentially involves a large air-core inductor connected in parallel with the output transformer’s primary winding, the idea being to allow the output valve’s anode to range over double the anode HT supply voltage to give considerably greater headroom and better linearity, as well as allowing a smaller, lighter and better-performing output transformer to be used. The 1620/6J7 valve was chosen as it was specifically designed for very low microphony and hum. The European equivalent is the EF37A, and it’s also quite similar to the EF86. A 6X5 rectifier valve was employed in the internal mains power supply.

Both audio transformers had multiple winding taps to allow for different connecting impedances: 250 or 30 Ω for the mic input, and 150 or 600 Ω for the line output. The input transformer could also be bypassed completely to allow operation with crystal microphones, which needed a very high input impedance, achieved by feeding the first valve directly.

The large gain knob actually operated a complicated custom-built variable attenuator, which adjusted both the signal level feeding the second stage and the amount of feedback around the first gain stage, an arrangement which ensured enormous headroom even with high-output mics. A separate feedback loop was used around the second and third valves to ensure stability and linearity. The original OP-6 delivered up to 88dB of gain — far more than most of its contemporary peers could manage but something that was necessary with the low-output ribbons of the day.

The original specifications claimed a frequency response of 30Hz to 15kHz, ±1dB, with distortion of 0.5 percent RMS at the nominal output level of +8dBm (dBm, not dBu, because it expected a 600Ω termination). The maximum output level was +18dBm with the noise level 70dB lower (ie. just -52dBm). The whole unit weighted 20.5lbs (9.25kg).

RCA also made a partnering four-channel portable mixer called the OP-7, which used a single 1620/6J7 valve in each channel as a low-gain buffer to drive the channel’s passive attenuator. The outputs of all four attenuators were mixed passively into the primary of the output transformer, resulting in a mic-level output. This would then be connected to an OP-6 preamp to raise the mixed signal up to line level.

A spectacular re-imagining of the classic RCA OP-6 valve mic preamp, retaining the same period character but improving on the noise performance slightly and adding some modern-day features.