The Jennings Univox was a valve‑based monophonic synthesizer manufactured during the 1950s and '60s. Portable and with a built‑in amplifier, the Univox produced passable impersonations of the human voice, complete with vibrato. Tonal variations were achieved via quick‑access tabs, and the level controlled dynamically by a knee lever. Incidentally, Jennings Musical Instruments would later go on to develop Vox amplifiers.

I'd always thought it was the Univox's contemporary, the Selmer Clavioline, that brought us the melody on the 1962 hit 'Telstar'. Its performer Peter Knight remembers it that way, which should be enough, but there are those who hear the sawtooth tones of the Univox instead. Side‑stepping that discussion for the sake of brevity, finding a working example these days is rare. So when Rhythmic Robot got their hands on one, preserving it in Kontakt form became a bit of a quest: go to www.rhythmicrobot.com/page0/page14/page44/page45/index.html for the story.

Requiring the full version of Kontakt, Jennings looks great and sounds authentic, but it's not all about authenticity. Switch into polyphonic operation, add a second oscillator (with variable detune and spread) and you're heading into lusher territories, far beyond the orbit of 'Telstar'. There's a low‑/high‑pass filter, twin envelopes and glide, plus a voltage knob that tweaks overall brightness. A small collection of example patches is provided, complete with nebulous pads and '60s solos, but it's easy to roll your own. To finish off there's a choice of effects, including delay, chorus, phaser and amp simulation.

Purists in search of the raw, 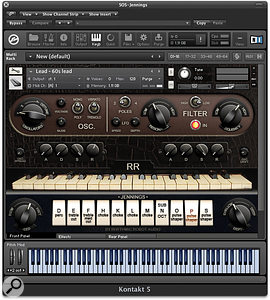 unadorned Univox experience should turn to the bottom part of the main panel. There you'll find the 11 tabs of a standard model Univox plus two knobs for vibrato. These tabs are more helpfully labelled than the original, although their actions are still not exactly intuitive. Some are obvious enough; the 'A' tab is subtitled 'perc' and this adds a hard percussive click to each note. Another easy one is the 'N' tab, a very loud sub octave. Happily, and in contrast to the Univox, these level imbalances can be adjusted via controls tucked away on a rear panel, and this is also where you can assign the mod wheel to the role of knee controller.

The remaining tabs consist of three pulse shapers, four 'choke' tabs, and two labelled 'treble cut'. The effects of some of these can be subtle in isolation, perhaps heard as an increase in body or a distortion of tone. Since the effects are cumulative, the different tab combinations generate over 2000 possible variations! This effectively rules out capturing the instrument solely by sampling and it is therefore a mixture of sampling and convolution that drives the Jennings. Even so, you'll need to reserve 1.5GB of disk space for it — why not make yourself a cup of tea while it's downloading!

Rhythmic Robot harvested hundreds of samples, each 20-seconds long from the full five octaves a transposed Univox can deliver. I can't fault their length or quality, nor the efforts required to set them in Kontakt. If I do have misgivings, it's that Jennings still feels slightly expensive compared to RR's earlier instruments, whether it was the sound of Joe Meek's classic or not. Paul Nagle

Top 10 Boring Things That Are Really Important In The Studio
2 weeks 23 hours ago.