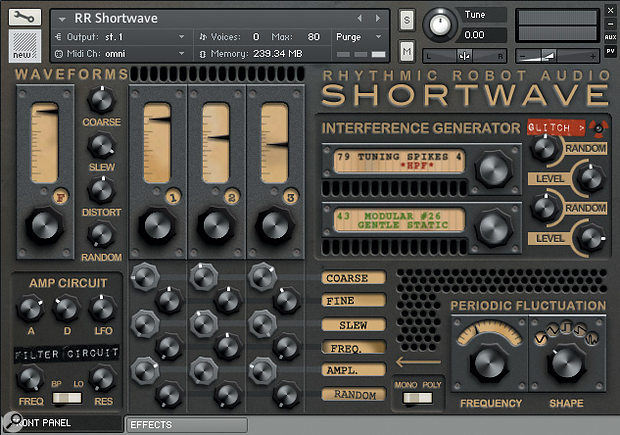 Rhythmic Robot’s Shortwave is a Kontakt instrument crammed with ghostly voices, radio tuning sweeps, morse code bleeps and an assortment of hisses, crackles and pulses. Occupying a little over 250MB on your hard drive, this isn’t merely a collection of samples to work through and possibly tire of, but a tweakable synth built from four oscillators and two ‘interference generators’. It also happens to be one of RR’s more ‘out there’ creations, as demonstrated by its strange, ethereal and unearthly example patches.

The four sine oscillators consist of a fundamental that can be pleasingly distorted, plus three tunable harmonics, their ratios unmarked on the panel to underline RR’s commitment to chaos. The oscillators are sampled from ‘unstable analogue sources’ but it’s the two interference generators that produce the more outlandish atmospherics. With 111 samples to pick from, these are noises harvested from the amazing sonic resource that is shortwave radio, with supporting samples taken from a modular synth.

If you’ve never dallied in shortwave territory before, prepare to be captivated by mysterious number stations, disembodied wails, warbles and mangled snippets of exotic chatter drowned in a sea of cosmic static. Many of these noise sources could become energising backdrops for your otherwise pristine, in-the-box musical output.

The interference samples are long — between 20 and 30 seconds each — and their playback points are randomised to crank up the unpredictability still further. Randomness is everywhere, from the progressive scrambling of oscillator pitch to a Glitch control acting as a one-click parameter scrambler. Glitch therefore generates new patches quicker than you can say ‘white noise’ and if the results don’t immediately grab you, a few more clicks should rustle up something with potential.

The oscillators provide a convincing basis for drones and atonal pads thanks to dedicated randomising LFOs and a common modulation source with the funky name ‘Periodic Fluctuation’. Slew is another worthy contributor and it’s a term given two different meanings depending on where it appears. Its primary function is glide or portamento but when applied to the three individual harmonics, slew represents a ‘swoop down in pitch to the base frequency’ instead. The synthesis engine is completed by a basic but adequate two-stage envelope, plus a low-pass/band pass-filter.

Built-in effects consist of an echo generator versatile enough to handle tightly resonant boings or conventional echo. There’s also a reverb unit with a custom convoluted plate. Interestingly, you can choose whether each effect is applied to the entire patch or to the sine wave components only. It can be particularly effective to set the various radio samples dry against a reverberant background wash — unless you’re partial to unbridled slush, that is. Finally, the output section can be subjected to various simulated speaker and microphone combinations, starting with small, squeaky radio sets and graphite mics and working upwards in quality.

Set in its tasteful retro interface, Shortwave is an approachable, affordable instrument with a distinctly spacey personality. This means it’s ideal whether you have science documentaries to score or simply enjoy weird pads, space transmissions and unsettling background noises. As per all RR’s instruments, Shortwave is impeccably sampled and requires the full version of Kontakt, version 4.2.3 or later.