Guitar amps don’t come much more portable than this updated model from Roland. But how does it sound?

As a frequent user of the original two-Watt battery-powered Roland MicroCube guitar amp, I was intrigued to see what improvements had been incorporated into the latest GX version. Though the same size as its diminutive predecessor, at 247 x 172 x 227 mm, the 2.7kg MicroCube GX has a 3W output, can run for up to 25 hours on six NiMH AA-size batteries (around 20 hours on alkaline batteries), and now includes a basic sharp/flat/OK chromatic tuner. A mains adaptor and a strap are also included, and you can choose black, white or red versions of the amp. 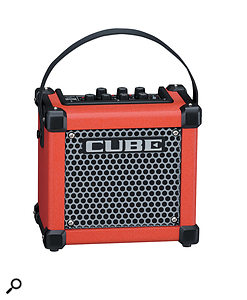 Offering eight switchable amp types with separate gain, volume, tone and master volume controls, the modelled sounds range from clean, through blues and classic rock to the new ‘Extreme’ heavy metal amp setting. There’s also now a microphone setting, for use with karaoke-style mics that terminate in a jack plug. Of the five effects, the usual modulation options are joined by Heavy Octave, while a choice of delay or reverb (with the addition of a new spring model) can be added separately.

Also new to this model is the ability to store your favourite settings by holding down the Memory button. There’s only space for one saveable setting, but by switching between that and the manual mode you effectively have a two-channel amp. The iCube Link interface jack integrates with the iPhone, iPad, or iPod Touch, providing two-way communication with your music apps. Not only does this allow you to play along with music tracks, you can also send the modelled amp sounds into an iOS recording app. Ingeniously, this all happens via a stereo mini-jack that can also accept a standard analogue stereo source — and the cable is included. If you don’t have a favourite music app, you can get Roland’s Cube Jam free of charge from the iTunes App store, which allows for recording your own 16-bit/44.1kHz jams. 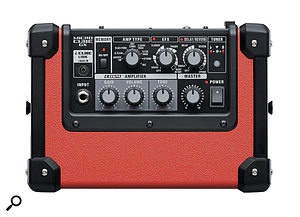 Although there's only storage space for one preset, the ability to flick between it and manual mode effectively gives you two switchable channels. Cube Jam offers independent playback speed and pitch adjustment, and a centre-cancel function to reduce the level of vocals or soloes in pre-recorded material.

The sound of the amp seems weightier than that of the original, and there’s a slightly compressed feel to the cleaner tones that makes them sound more ‘produced’. Those blues and rock sounds come over well too, and with a surprising impression of power and depth. The sound gets a touch rough at high volumes, but used sensibly it actually sounds really good, and it’s certainly not a toy. For busking, garden jams or open mic nights, the MicroCube GX delivers the goods in style.

The Line 6 Micro Spider is probably closest in terms of features and price, with the Vox DA5 coming in a little cheaper.

A great-sounding battery amp that plays for hours and includes a useful selection of amp and effect models.