The only living engineer to win Grammy Awards for Best Engineering in both the Classical and Non-classical categories, Richard King was also responsible for recording, mixing, and mastering one of the most fabulous-sounding records that I know of: Yo-Yo Ma’s collaborative crossover album The Goat Rodeo Sessions. In his book Recording Orchestra And Other Classical Music Ensembles (Focal Press/Routledge, ISBN: 978-1138854536), King reveals the nuts and bolts of his own recording, editing, and mixing methods for a wide range of classical ensembles — not only different types of orchestra, but also choirs, chamber ensembles, and accompanied soloists. 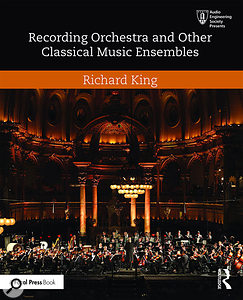 A whistlestop overview of monitoring and microphone technology whets the appetite, but the real meat arrives in chapter four, which gets stuck into the pros and cons of various orchestral layouts. I’ve seen this subject touched upon in many books and articles, but King’s discussion is head and shoulders above the pack, delving into the competing agendas and internal politics of everyone involved (the musicians, the conductor, the producer, the stage manager, the union reps...), touching on historical and sub-genre-related issues, and setting out down-to-earth planning methods the audio engineer can use to improve the recorded results.

The selection and configuration of the recording venue warrants another whole chapter, deftly addressing questions of reverberation, raked seating, proscenium arches, ceiling height, and on-stage acoustic feedback for the musicians, as well as explaining differences of approach for opera houses, concert halls, studios, churches, and recording studios. Working from this foundation, King dedicates around 100 pages to mic techniques, explaining how he deploys his main pickup rig, outriggers, and spot mics in practice. Again, he’s not satisfied with vaguely itemising mic types and positions in the abstract (as do many texts on this subject, sadly), but really drills down into the decision-making process, revealing not only the nuanced arguments that form the basis of his initial miking choices, but also, crucially, how he adapts his initial setup in response to the ensemble balance, the room, and the artistic requirements of the musicians, the producer, and the score.

The editing, mixing, and mastering processes receive their own chapters too, and although brief (a reflection of the production emphasis in classical styles) are far from short on important specifics about documentation, balancing, reverberation effects, and automation. Rounding out the volume are sections dealing with capturing live concerts and working in surround, as well as plenty of discussion of the audio engineer’s role in planning and executing a successful session in collaboration with musicians and producers. A small but well-chosen selection of accompanying audio and video resources are provided on the publisher’s web site.

My brief content summary doesn’t, however, even begin to do this tremendous book justice, so let me try to explain in more detail why it impresses me so much. Whenever I read any book about audio production, I have a pencil to hand, with which I mark up techniques or quotes I might want to return to in future. Usually this saves me a good deal of time, because (to be brutally frank) the core content of most instructional books is spread pretty thinly through the page-count. In this instance, my attempt at time-saving became farcical, because pretty much every page ended up looking like a skating rink for graphite spiders! Despite this almost dizzying torrent of in-depth information, though, the text remains very clear and readable, thanks to the author’s concise style, the commendably plain language, and a welcome touch of dry humour.

Another refreshing aspect of King’s text is the forthrightness of his opinions. Unlike other writers, he doesn’t attempt an exhaustive catalogue of recording techniques as some kind of academic exercise, but instead focuses on that subset of techniques which he has personally found most successful in practice. Coming from anyone else, I might have counted this a weakness, but on balance I feel that such elegant rationale from an engineer with such unimpeachable chops provides a ‘fast track’ for learners that’s one of the work’s key strengths. There are plenty of places you can find out how classical engineers get results in a generic sense; what I really want to know is how on earth this specific guy gets such spectacular results, and in this respect the candid, no-nonsense insight into his thought-process is, quite simply, gold dust.

Finally, it reflects on the extraordinarily practical slant of this book that, in my view, it utterly transcends its stated aim. To hell with classical orchestras — whatever the ensemble, whatever the style, however the musicians choose to vibrate air molecules, this book will surely improve your recordings of the resultant sound waves. As such, I think King’s Recording Orchestras is nothing short of indispensable for anyone interested in the art of ensemble recording. And, for my own part, I’d say it’s probably the finest book on recording technique I’ve read in a decade.