How close have this boutique company come to recreating the sound of a vintage AKG C12? 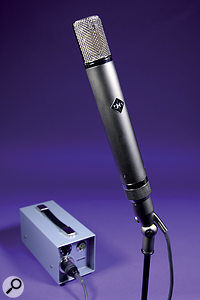 Described by US-based company RMS Audioworks as their flagship microphone, the RMS12 is a detailed recreation of the much-loved vintage AKG C12, which was discontinued in 1963. The RMS12 is powered by a 'New Old Stock' GE 6072 valve and, just like the original, it uses the AMI Tab Funkenwerk T14/1 transformer. The all-important CK12 capsule is hand built, with great attention to detail.

Only the power supply has been brought up to date, to conform to modern regulations and to offer maximum flexibility in pattern selection, but even that has a solid retro look to it. Such a microphone is understandably costly, but then it is still cheaper than the modern AKG C12VR — which, although a good mic in its own right, doesn't really sound like an original C12. As Audioworks undertake a lot of restoration work on vintage mics, including C12s, they should know a thing or two about how they're put together and what they should sound like!

Employing the same simple tubular structure as the original, the RMS12 has a copper chassis and uses point-to-point wiring, modelled on the layout of the original C12 and incorporating premium-grade capacitors and resistors.

It comes with a Gotham eight-pin cable fitted with custom connectors, all packaged in an aluminium case, along with the power supply. One end of the cable from the review model came hard-wired into a combined connector and swivel stand-mount, so if you use a conventional shockmount, I presume this will be left dangling beneath it. This seems an odd design choice, as, when the mic is mounted, the connector pins determine the orientation of the mic relative to the swivel mount — and, in the case of the review example, the two were misaligned so that when the swivel was pointing directly towards the performer, the mic capsule was pointing almost directly to one side.

Polar-pattern selection is via a detented rotary control on the PSU, offering variable pattern control covering everything from omni, via multiple widths of cardioid to figure-of-eight, so it can replicate all nine patterns of the original C12. There's a voltage-selection switch for US or European voltages, and a balanced three-pin XLR carries the output for connection to a mixer or recording interface. There's no level control or filtering.

I set up the RMS12 alongside my own C12VR, and went through the usual range of spoken word and instrument tests, which all revealed the RMS12's noticeably more open high end and a few dB more sensitivity. It also sounded adequately quiet, although the original C12 was nothing special in the noise department, with a self-noise of around 20dB. Other than on female voice, I've always felt that my C12VR sounds rather too soft at the top end (despite the official graph showing it to have a hint more presence lift than the RMS12), and the RMS12 came over as better balanced, to my ears, delivering a viable result on every sound source I tried it with. There's a subtle airiness to the highs, but the mic manages to combine that with a rich low-end and mid-range.

According to the frequency-response plot, the RMS12 has two 'presence' bumps — one at around 5kHz and the other at around 12kHz — but these are fairly wide, and only three or four dB up at their highest points, which is about right for a C12. The lows, which look exceptionally flat below the start of the first presence hump, seem better controlled than on my C12VR, which I always end up using with a high-pass filter. The overall impression was of a classy-sounding mic capable of stealthy flattery, and with a subjective character very close to that of an original C12.

It's clear that this mic has had a lot of dedication poured into its design, in a genuine quest to get as close to an original C12 as possible, and other than the rather puzzling stand-mount alignment issue on the review model, the RMS12 is beautifully engineered, using the best of everything and put together in a reassuringly old-school way. The C12 has many fans, which has resulted in a number of boutique emulations, but Audioworks seem to have pulled out all the stops in trying to recreate it down to the finest detail. That said, however, all the original C12s have either aged or had their capsules re-skinned by now, so there will always be arguments as to exactly what the C12 sound should be!

Whether you can justify this kind of money on a single microphone is another question, of course, with many very capable microphones on offer for around a tenth of the price. But if you have your heart set on a C12 and don't want the uncertainty of nursing an original, you'd be missing out if you didn't add the RMS12 to the list of clones to audition.

There are other boutique companies such as Pape, Telefunken, Peluso and Wunder Audio building very detailed clones of the C12, but they are all expensive.

We tested the RMS12 against AKG's C12VR, their modern recreation of the original C12. To listen to the audio files, visit /sos/may13/articles/rms12-media.htm.

Although there are several C12 clones vying for your cash, this one will take some beating for sound and attention to detail.