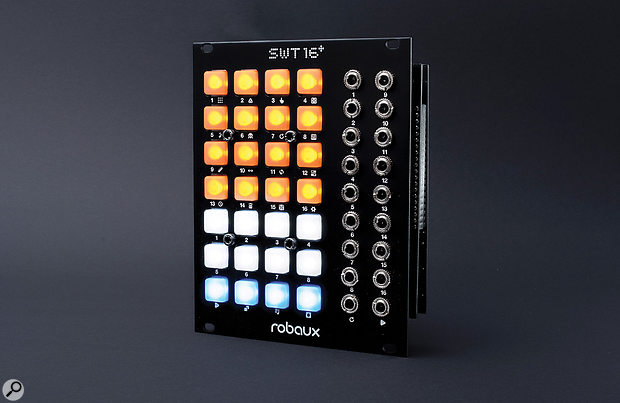 Robaux are a relatively new German company making Eurorack modules. Their latest is the SWT16+, a 16‑track trigger sequencer with up to 64 steps per track squeezed into an impressive 20HP.

The layout of the sequencer is compact and straightforward. There are outputs for each of the 16 tracks and just two inputs, one for clock and one for reset. Programming and performance is done with a matrix of illuminated rubberised buttons. The module feels sturdy and will fit easily into a skiff case.

The Sweet 16 (yep, that's what it's short for) can be programmed a number of ways. A classic X0X mode uses the top 4x4 grid of orange buttons to enable steps, whilst the first row of white buttons selects which bar you are editing. Patterns can be up to four bars long. If inspiration doesn't strike that way, you can use the Euclidean or Random functions to generate tracks for you. Lastly, you can record rhythms manually by tapping them out on the buttons.

Per‑track length and clock division up to a fourth means polymetric patterns are a breeze. In order to keep some semblance of control over potentially polymetric chaos, there is a 'length reset' option which will restart the track every first step of the master clock. It's a nice touch that this option is per track and not just global, so you can choose to have some tracks reset periodically whilst others freewheel. Further interest can be added to tracks by reversing the direction of play or by using the Offset function to shift tracks forwards or backwards.

Once you've programmed some tracks, a number of performance modes permit real-time interaction. There are four modes: Mute, Fill, Clock Reset and Perform. Mute will change the 16 track buttons into track mute buttons. Fill will replace individual track outputs with continuous triggers for as long as you hold down a track button, and Clock Reset will allow you to manually reset specific tracks.

The fourth mode, Perform, combines several functions into one. The 4x4 orange buttons become four tracks, one column per track. Each row activates a different function. The first row is track mute. The second row activates Fill. The third row activates Tap record and allows you to record new patterns into the relevant track on the fly. The bottom row allows you to select tracks 1-4, 5-8, 9-12 or 13-16.

The SWT16+ is clearly aimed at live performers. Its most obvious function will be as a solid drum sequencer in a live set. In that situation you need to be able to switch between stored patterns easily, and at any time you can switch between eight patterns. Furthermore, these patterns can be saved to one of 16 preset locations. A preset will save the entire setup of the module, which includes tracks, patterns and sequencer settings. The obvious use for presets would be for different songs in your live set, although I struggled to get presets to switch smoothly whilst the sequencer was playing, which might cause problems for some people. It's worth mentioning also that you have to remember to save otherwise you'll lose your work when you switch off.

You're probably going to want to trigger a variety of different modules. Thankfully there are some per‑track options which will help. Gate mode will toggle between sending triggers for every note or a longer legato gate for two or more adjacent notes. You can also invert the gates for any modules that might need drop‑voltage triggers. A third, more experimental track option, called Coin, flips a virtual coin for every step to decide whether to trigger or not. It's not the most flexible probability function I've come across, but it could still come in useful if used sparingly.

I can imagine the SWT16+ appealing to anyone who needs a trigger sequencer for a small live rig. It does take a certain amount of muscle memory to truly master; a lot of the functions are hidden behind button combos and it can be difficult to make out the front‑panel labels in a dark room when all the buttons are illuminated and flashing.

This is an impressive amount of sequencing in a relatively small module. If 64 steps, 16 tracks, eight patterns and 16 songs of no-nonsense trigger sequencing sounds useful to you, along with polymeters and lots of per-track options, all wrapped in a skiff-friendly, space‑conscious package, then the SWT16+ could be the perfect fit.

The Console That Changed Mixing Forever
4 days 10 hours ago.