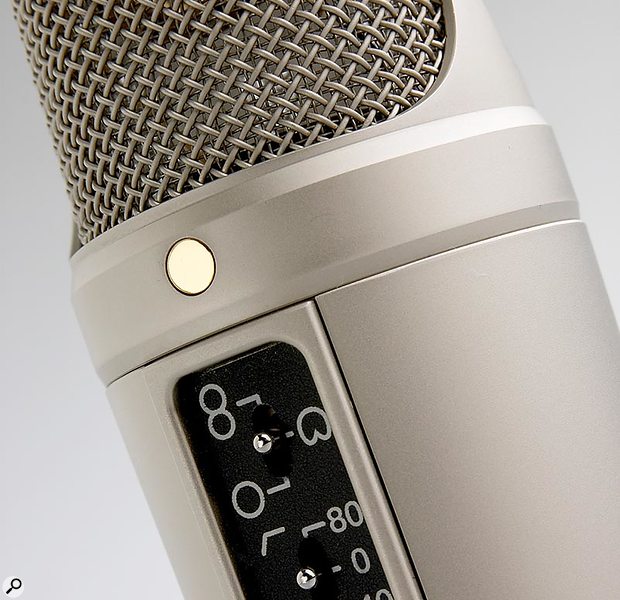 Rode redesign their well-known NT2, and achieve a class-leading noise floor in the process.

While many companies are building mics in China, or simply importing standard Chinese models badged with their company names, Rode can honestly say that they've been there and done that — and moved on. They were probably the first successful mic company to use Chinese manufacturing, but over the past couple of years they've finished moving all their manufacturing to Australia, where state-of-the-art automated machines and circuit-board assembly devices have taken over from cheap labour. Even parts of the capsule manufacture traditionally done by hand are carried out using high-precision machines. Doing things this way means you have to sell a lot of mics to make the sums add up, but Rode have gained a strong reputation for building high-quality mics at medium to low prices, so that doesn't seem to be a problem for them.

The NT2A replaces the original NT2, which was the very last mic Rode had built in China. Apparently this was a difficult decision, as the NT2 was still selling very well. It seems that Rode wanted to sever the last ties with Chinese manufacturing so that they could put Made In Australia on their mics and distance themselves from the other 'Made In China' brands.

Rather than just update the design of the original NT2, the NT2A looks radically different to its predecessor, with a very distinctive inset panel housing the pattern, filter, and pad switches. It's also very different inside. This FET, transformerless mic can be switched between figure-of-eight, omni, and cardioid modes, and has a choice of 80Hz or 40Hz low-cut filter frequencies as well as a filter-bypass switch position. Similarly, there's a choice of 5dB or 10dB pads.

One factor many manufacturers seem to ignore is the effect of the acoustic properties of the housing on the sound. How many mic baskets ring if you tap them? Rode used mathematical modelling to reduce the interaction between the capsule and its housing, and employed the same dual-diaphragm, one-inch capsule they developed for their excellent K2 tube microphone. The NT2A body is made from solid cast metal that is machined, polished, and bead blasted prior to nickel plating to provide a very high level of finish. A locking ring on the bottom of the body accepts the optional Rode shockmount. Heat-treated steel mesh protects and screens the capsule. To keep costs to the user down, the mic is supplied in a simple zip-up pouch with a mic stand adaptor.

If the build quality and appearance are impressive, the technical spec is no less so. When I last spoke to Peter Freedman, Rode's founder, he confided in me that one of the electronic designers had a background in audiology, which I took to meaning hearing-aid design. While hearing aids and studio mics might not seem to have a lot in common, hearing aids require extremely low-noise circuitry. Certainly Rode mics are amongst the quietest available at any price, and the equivalent input noise of the NT2A is just 7dBA (measured as per IEC651 and IEC268-15), which works out around 10dB quieter than the typical competition. What's more impressive is that this figure, which works out at an 87dB signal-to-noise ratio at 1kHz (reference 1Pa), isn't at the expense of maximum SPL. In fact the NT2A manages a spectacular 147dB maximum SPL without the pads switched in, and up to 157dB with the 10dB pad in. Nothing outside NASA makes that much noise!

The frequency response of the mic, with no low-cut switches engaged, runs down to below 20Hz and extends to in excess of 20kHz, with a moderate presence rise above around 3kHz rolling off again above 15-16kHz. The mic is also pretty sensitive, yielding -36dB (reference 1V/Pa), and the dynamic range is an incredible 140dB with a maximum output level before clipping of some +16dBu. So far, then, the NT2A looks impressive, both mechanically and electrically, but the really important thing about any mic is how it sounds.

It is difficult to describe the sound of the NT2A because, subjectively at any rate, it is very neutral, with a smooth tonal balance right across the spectrum. In cardioid mode it sounds detailed at the top end without being harsh, and the lower end of the vocal range comes over as solid and well-focused with the required degree of depth and authority. Clearly the broad, subtle presence peak helps bring out the detail without allowing the sound to become aggressive, but the use of the sweet-sounding K2 capsule must also contribute a lot to the sound of this mic. Like the best classic large-diaphragm mics, the NT2A gently assists the natural sound, but not in a way that makes itself obvious.

As an acoustic guitar mic, the NT2A also delivers in style, though its tonal contribution in this area is quite similar to some other cost-effective mics I've tested, as some of its competitors also handle this task extremely well. Where the NT2A really shines, though, is in its very low background noise, so even quiet instruments come over cleanly provided that you use a reasonable mic preamp. Similarly, the extraordinary headroom means you can stick it in front of the loudest guitar amplifier and it will handle everything you can throw at it, without distortion, though the same may not be able to be said about some mic preamps, which is why you get the pad switches.

The figure-of-eight position has nominally the same tonality as the cardioid pattern, but switching to omni allows more of the room sound to contribute, so in most cases the tonality will change according to the character of the room you're working in. As expected, the omni pattern sounds slightly more open, but in cardioid mode the NT2A's design is still pretty airy, whereas some cardioids can sound noticeably congested.

Overall I liked this mic a lot, especially given its very attractive price. It has a classy sound that comes over as both rich and natural, it is extremely quiet, and it is put together very nicely, with neatly built surface-mount circuit boards and minimal wiring. Some mics try to use coloration to cover up their shortcomings, but here the mic's natural sound is tweaked only insomuch as it has a gentle presence peak. It would have been nice to get an included shockmount, but I can see the logic in packaging the mic to make it as affordable as possible. In a project studio with a solid floor, a shockmount may not be necessary, though a pop shield is, as always, an essential for recording solo vocals.

There are few multi-pattern mics at this price that could challenge the NT2A on sound, and none that I know of that could beat its low noise floor.

Rode have managed to produce a very sweet-sounding and highly specified multi-pattern microphone at a very affordable UK price. Definitely one to try if you need multiple patterns, but also worth it just as a cardioid vocal mic.