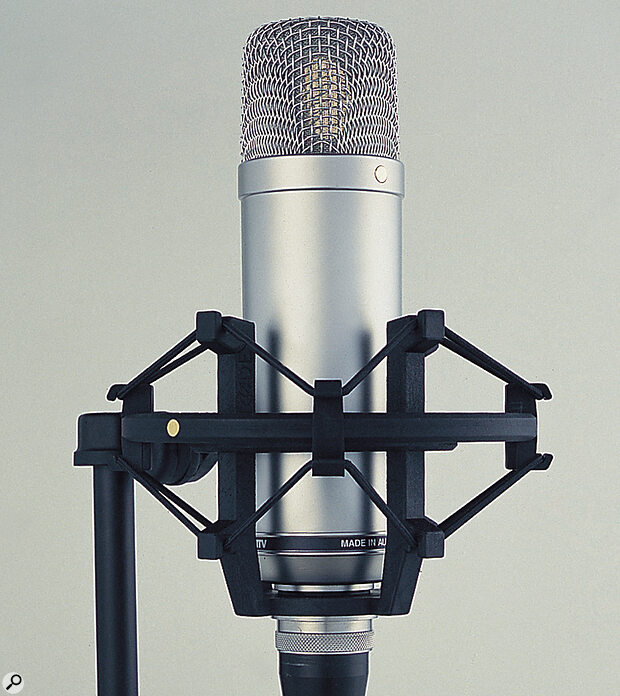 In which our hero Paul White puts an Antipodean valve studio mic through its paces to ascertain whether it is Nice To Vocals.

In the few years since they started out, Australian company Rode have managed to force a sizeable gap in the ranks of the established European and US microphone companies by offering nicely engineered, aggressively priced large‑diaphragm microphones that perform every bit as well as their more expensive competitors. For example, the Rode entry‑level NT1 capacitor cardioid model is now selling for little more than a decent dynamic mic, yet it stands comparison with other solid‑state capacitor mics costing many times more.

One way Rode keep the cost down is to offer cardioid‑only models for the benefit of those users who can't justify one of their more costly multi‑pattern mics. Another way is to manufacture the various components in different parts of the world. As I understand it, the all‑important capsules are built in China to Rode's specification — though having said that, the company have recently moved to a huge new factory near Sydney with the intention of eventually bringing capsule manufacture in house.

The NTV microphone under review is not exactly a budget model — tube mics rarely are — but it is still very favourably priced. It is a fixed‑pattern, large‑diaphragm cardioid capacitor microphone featuring a new one‑inch diameter capsule that utilises an edge connection system rather than the more usual centre element. The military‑spec multi‑pin connector that links the mic to the external power supply box is designed and built by Rode, while the valve itself is a readily available ECC81 dual triode (albeit hand‑selected). Just getting a replacement valve for one of the 'classic' valve mics can cost more than the entire NTV package!

Some designers believe the output transformer contributes as much to the sound of a mic as the valve itself, and Rode have had theirs custom built by Jensen, probably the leading name in the field of audio transformers. Even the capacitors are of audiophile provenance, from companies such as Solen, Wilma and Black Gates (the latter being no relation of Bill Gates, I assure you).

Mechanically, the microphone follows simple, classic lines. The CNC‑machined stainless steel case is a simple cylinder, the only real feature being a gold stud to indicate the business end of the capsule. A dual‑layer steel‑mesh basket protects the capsule, while a resilient moulding supports the capsule and helps isolate it from mechanical shocks. There are no pads or low‑cut filters on the mic or power supply — the only user controls are to be found on the PSU box in the form of a ground lift switch and a mains switch.

The accessory kit that comes with the NTV is comprehensive. A stylish foam‑lined aluminium equipment case holds the microphone and power supply with plenty of space for the locking multi‑pin mic cable (also included), plus IEC mains cable, conventional standmount and large elastic shockmount. A screw ring on the bottom of the mic secures either mount. A standard XLR connector takes the balanced mic output from the PSU box, while a recessed, screwdriver‑operated selector switch is used to set the mains voltage to either 240V or 120V.

No frequency response plot is provided with the microphone — the nominal response is quoted as 20Hz to 20kHz, though this on its own divulges very little. Self‑noise is better than 19dBA, which is fairly typical for a valve microphone of this type, as is the sensitivity at 15mV/Pa. Though no pad switch is fitted, the NT1 can handle SPLs of up to 130dB, so it should be able to cope with any sensible application. Most mixers have an input pad that can be used if the output from the microphone is too high for the mixer's mic preamp to accommodate. However, a low‑cut switch to counter the proximity effect might have been useful, even though most mixing consoles and mic preamps have a switchable low‑cut filter built in.

Connecting the microphone to the PSU is quite straightforward. A blue power indicator LED is linked to the valve heater voltage, which ramps up gradually over a period of a few seconds to reduce stress on the valve. The manual recommends the use of a pop shield — a sensible precaution with any vocal mic — and you simply connect the mic out of the PSU to the mic input of your mixing console using a regular XLR mic lead (not supplied).

As a vocal mic, the NTV has all the sonic hallmarks of a 'nice' tube microphone. Fixed cardioid‑pattern mics sometimes exhibit a slightly nasal quality, but the NT1 sounds natural and open, with a subtly flattering low end combined with good definition in the mid range. The high end is detailed yet smooth, with no tendency towards excessive sibilance. The overall sound has that slightly compressed, forward quality associated with the best vocal valve mics. Compared with my NT1, which I like very much, the sound is not dissimilar in a 'broad strokes' kind of way, but when you focus in on the detail, the NTV is definitely a 'bigger', more open‑sounding mic, capable of pulling the vocals closer to the listener. Though the overall impression is of a natural, uncoloured sound, there's actually quite a bit of gentle flattery going on, and the end result is a somehow more solid sound which is better 'integrated' than any of the solid‑state mics I had for comparison.

Having just one good valve microphone can make all the difference to your recordings, especially if the rest of your recording chain is digital. The improvement to vocals is immediately obvious, but as with most good capacitor mics, this model also works well with just about any acoustic instrument and it's particularly nice on acoustic guitar. Most users like to be able to hear the difference when they patch in a valve mic and the NTV certainly won't disappoint. It's not hugely coloured like some other valve mics are, just nicely rose‑tinted!

As a general‑purpose mic for use in a commercial environment where there's a different singer on every session, the NTV would seem like a good choice because it doesn't have an obvious sound — it simply flatters what is already there. However, if you're choosing a mic specifically for use with your own voice, it would be wise to test it side by side with other valve models, such as the similarly priced AKG SolidTube or the Alesis GT series of valve mics to see which suits you best.