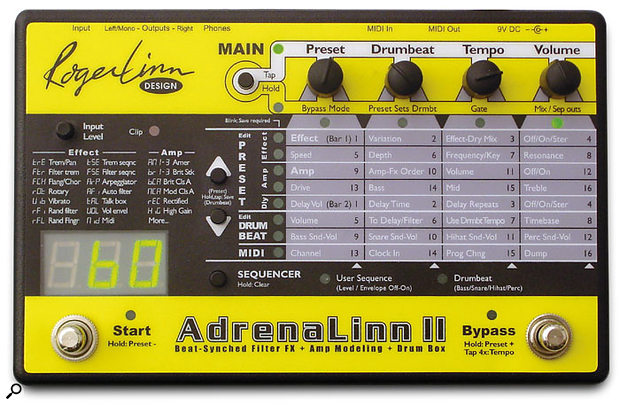 Roger Linn Design have updated their versatile instrument processor, which still produces an array of unusual effects not normally available from a single box, but is now claimed to be easier to use.

The AdrenaLinn II is the successor to the original AdrenaLinn developed by Roger Linn Design a couple of years back and reviewed in SOS September 2002. This unusual processor has the same physical layout as its predecessor, but with redesignated controls and enhanced software. Like the original, the AdrenaLinn II is (broadly speaking) a mono-in/stereo-out stomp-box effects processor designed primarily for guitar, with an integral 'simple but solid' 200-pattern programmable drumbox based on 40 drum samples.

The key to the unique sound of this unit is that the effects, many of which are rhythmic in nature, can be locked to the drum-rhythm tempo. The rhythmic effects are driven by a 32-step sequencer for controlling filters, amplitude modulation and so on, and these treatments are available alongside amp modelling, delay and more traditional modulation effects. Tempo can be sync'd internally or to an external MIDI Clock source, with support for MIDI Start, Continue and Song Position Pointer commands and, of course, patch saving and loading is possible over MIDI if the internal memory isn't big enough for your needs. Connections include a high-impedance mono input and stereo outputs on unbalanced jacks on the rear panel, MIDI In and Out, and a power socket for an included AC adaptor. Footswitches are provided for bypassing the selected effect and for starting or stopping the drum generator. A trim pot and clip LED on the front panel allow you to match input gain to your instrument.

The AdrenaLinn was a brilliant concept, but many players still found it a little too complicated to program, so Roger Linn has redesigned the software and interface to make it more user friendly. He's also managed to add a few new features at the same time. The front-panel overlay has been redesigned, with the colour scheme changed from blue to predominantly yellow, grey and black, but the unit is still pretty much the same as before in terms of its hardware (though the circuitry has been tweaked in some areas). The good news for owners of original AdrenaLinns is that an upgrade kit, comprising an EPROM and a panel overlay, is available at a reasonable cost.

For me, the unique aspect of the AdrenaLinn is the way it creates rhythmic effects. Though these are driven by the internal 32-step sequencer, you can use MIDI data from a sequencer to control the loudness or filter setting of the different steps.

When I reviewed the original AdrenaLinn, I found that a quick way to create a sequencer-driven rhythmic gated effect was simply to choose an existing rhythmic tremolo preset and then edit it to allow control of the volume via MIDI Note velocity. The effect can then be driven from a repeating bar of 16 or 32 consecutive MIDI notes, where the velocity of each note determines the loudness of the step. To produce a chopped effect, loud notes are simply separated by zero-velocity notes.

The processing side of the AdrenaLinn II really comprises three stages: the effects, the amp simulation, and a separate delay of up to 2.8 seconds (more than double the delay time of the original model) that can be tempo sync'd. There are 100 factory presets (newly designed for the AdrenaLinn II) that show the potential of the machine, but you can also store 100 further user presets or edits. One of the amp-editing options is to change the order in which the amp simulation and effects are connected, and of course the usual amp controls of Drive, Bass, Mid and Treble are also included. It's also still possible to feed the drum machine through the amp/filter section, which can result in some very creative sounds.

The rhythmic effects that can be produced are mainly based on tuned resonant flangers, resonant filters, rotary speaker simulations, panning, delays and rhythmic gating, but there's also a comprehensive set of amp/speaker models. Parameters are edited using four rotary encoder knobs that sit above a printed matrix of parameters with up/down buttons and status LEDs to navigate up and down the rows. This matrix has been redesigned for the AdrenaLinn II, to give rapid access to the most often-used parameters. It's now separated into clearly-defined Preset sections for Effect, Amp and Delay editing and retains dedicated sections for editing the drum beats and setting up the MIDI side of the machine. Parameters are shown in a simple three-character, seven-segment display, and consequently some of the abbreviations can be a bit cryptic, but many of these are now printed on the front panel alongside the effects or amp models they represent. It's just a shame that the panel legending is a bit on the small side.

In addition to adjusting parameters in the editing matrix, the main function of the four knobs is to offer direct control over the Preset, the Drumbeat, the Tempo and the overall output Volume of the unit. An adjacent button can be tapped to access this main function, or held down to shift to a different mode, wherein the first knob is then used to set up the Bypass mode (several options are available, from a complete bypass to keeping the amp modelling but not the effects). The second knob accesses options associated with the preset drum beat mode, which determine whether or not selecting a preset also selects an associated drumbeat; the third knob adjusts the integral noise gate (which now has adjustable sensitivity), and the last regulates the balance between the drum and guitar sounds. Normally both are mixed to the main stereo output, but it's also possible to feed the guitar output in mono to one output and the drum beat to the other.

Fourteen effect types are listed, along with their display abbreviations, at the left side of the AdrenaLinn II's top panel, and each can be adjusted with up to six instantly accessible parameters and up to four further advanced parameters that are normally hidden from the user. The tempo-driven effects cover a lot of ground, but some of the obvious examples are tremolo, auto-pan, filter tremolo, flanger, chorus, rotary speaker emulation and vibrato. Less obvious, and generally more exciting, are random 'sample and hold'-style filtering, tuned resonant flangers, rhythmic tremolo or gating, stepped filter sequences and arpeggios based on tuned resonant filters that add a background melody to any harmonically rich input signal. There are also effects that may be directly triggered from the note being played, to create more synth-like sounds. These include wahs, synth filters and a simulated talkbox. Delay is always available within the main effects section, where the delay time can be set manually, via tap tempo, or locked to the internal sequencer. Variable feedback controls the repeat echo effects. 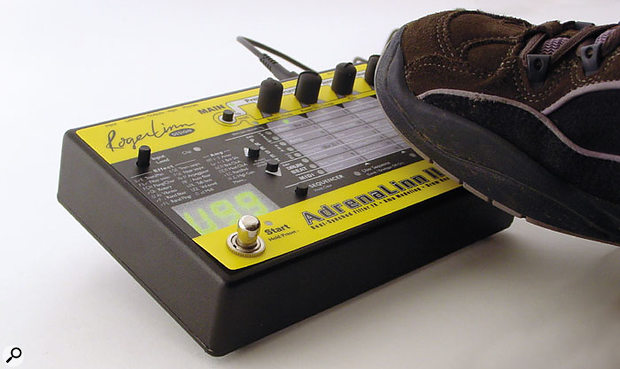 The AdrenaLinn's amp modelling capability has been greatly extended and now provides 24 models. These cover most of the stalwarts found in other guitar-modelling preamps, including sounds based on classic British and US models, plus some unique Linn creations (see 'Amp Models' box for a list).

Some of the AdrenaLinn II's amp models were inspired by commercial designs. All trademarks are the property of their respective owners.

To have fun with the AdrenaLinn right out of the box, you can simply use the four knobs at the top of the panel to choose from the factory-preset drum patterns and effect patches, adjust the tempo, set the output volume and then play. These factory presets give you a good idea of the gadget's repertoire, but if you have a little patience you can easily modify them or create your own. New drum patterns can be programmed by the user as 8- 12- or 16-note measures with variable swing.

All the edit parameters, including drive and EQ for the amp models, are shown in the printed matrix below the four knobs, and two buttons to the left of the matrix step up and down through the rows, as mentioned earlier. A status LED to the left of each row shows which is currently selected. Turning the knob above the row containing the selected parameter adjusts its value, and pressing the up/down buttons together starts the 'store' procedure. You can then select a user memory into which to save the settings, before pushing the button again to save. The newly-organised matrix makes effect editing much more straightforward.

I like the new amp models a lot better than those on the original AdrenaLinn, and I appreciate the extended repertoire of amp types. Each model has adjustable Drive, Bass, Middle and Treble, and speaker simulation is built in, so the unit is suitable for DI recording or for headphone practice. The accuracy of the sounds seems better this time around, and they're also more responsive to playing dynamics.

The new drum patterns and sounds are a step up from the originals, which I liked a lot anyway. The factory patterns are still mainly simple and unfussy, but they have a good solidity to them, are great to jam along to, and cover a number of styles, from rock to techno. There's still no way to chain patterns, but you could always record patterns into your sequencer as audio and then copy and loop them to create a new arrangement if you wanted to.

If you take any of the individual sections of the AdrenaLinn II (other than those wonderful synchronised filter effects), there's nothing that's too far out of the ordinary. But put them all together and you have a really intuitive and stimulating tool for jamming or creating rhythmic compositions. You can even route the drum machine through the effects section, if you want something really off-the-wall. As I found with the original model, a few minutes jamming while recording the stereo outputs (ideally with the drums on one side and the guitar on the other) can provide you with enough loops and grooves to form the basis of a new song. If you're running out of inspiration, just play with one of these for half an hour and you'll see what I mean! The AdrenaLinn II also produces interesting and useful results when using a bass or a synth as an input source, so don't dismiss it as purely a guitarist's effects box. It's rugged enough to use live, too.

It takes a little work and experimentation to get the best out of this device, and power users will probably want to lock it to a MIDI sequencer, but the effort involved will be repaid many times over. I thought the original AdrenaLinn was a great concept but the AdrenaLinn II is far more accessible and streamlined, with a usefully simplified operating system, and offers even greater scope for sound creation.

The AdrenaLinn II can be used on a variety of levels, from bashing your way through the presets to creating your own unique rhythmic effects and guitar sounds. The revised operating system is much friendlier than the first version, and the new/improved models and drum sounds are a welcome addition, as is the adjustable gate.