I'd normally be very sceptical if somebody said they'd come up with an all-analogue pedal-sized preamp that could emulate not only the tonal coloration but also the power stage harmonic characteristics of a particular valve amplifier, but with Roger Mayer's name behind the design, I was keen to take a closer look. Mayer played a big part in the development of early effects pedals and the story goes that he started out in 1964 making effects for Jimmy Page. Other notable users of his fuzz pedals include Jeff Beck, while Jimi Hendrix used his Octavia pedal on a number of records, including the solo from Purple Haze. Today, Roger continues to develop boutique guitar effects, which include the preamps reviewed here. 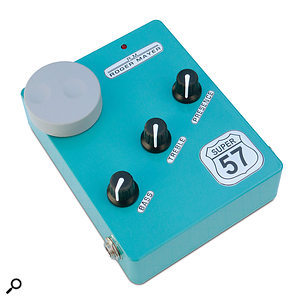 First out of the box was the Super 57, which is designed to produce a Fender-like amp sound. The box is similar in size to an effects pedal but there's no footswitch, so preamp/DI might be a more accurate description. Power comes from an included external PSU and there are just four controls on the top of the box, plus a simple power LED. Both the input and output are on quarter-inch jacks, the output being unbalanced, low impedance and compatible with line-level input stages. Apparently, the circuity includes a complete amplifier in miniature including the appropriate tone stack and output stage. There's certainly plenty on the circuit board, which is populated exclusively with discrete components and around 20 transistors.

A large grey knob overhanging the top left-hand corner of the case controls the gain, and the harmonic distortion increases at higher settings, as would be the case with a real valve amp. There's no attempt to replicate power-supply sag, but this was a deliberate design decision, as Roger prefers the enhanced sense of detail his approach produces. Roger tells me that for this processor he emulated the way a pair of 6L6GC tubes behave when pushed. Three tone controls are arranged diagonally across the top of the case and are labelled Bass, Treble and Presence. There's no separate mid control. 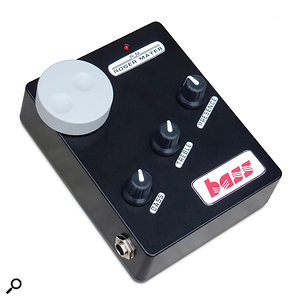 It's important to note that there's no speaker emulation built in to any of these units. This isn't necessary for creating clean amp sounds but patching in an overdrive pedal of any type, or indeed pushing the preamp hard enough to generate significant amounts of 'power stage' distortion can result in an unnatural edge to the sound unless further filtering is applied. Roger told me that these preamps are already in use in live applications, and in those situations using the desk EQ to tame the highs produces a suitable DI sound, but in the studio I found that using a speaker emulator plug-in after the unit gave a more authentic-sounding miked-amp result.

When using the 57, the characteristic tight, focussed Fender sound was definitely recognisable, and when pushed hard, both harmonic texture and level compression occurred in a very believable way. The circuitry is commendably quiet, with very wide-ranging tone controls and plenty of dynamic range, which is good news if using it for recording. Pedals placed in front of the unit behave in essentially the same way as when plugged into an amplifier. Although the output has a low impedance and can drive long cables, it would usually be patched via a conventional DI box for any live application, so as to produce a balanced, mic-level feed.

Based around exactly the same layout but with a black, rather than turquoise, livery, the M59's RAF roundel gives away the fact that it's designed with a 'British' voicing. As soon as you plug it in, those scooped, woody tones leave you in no doubt as to which type of British amplifier served as its inspiration. Again, there's that sense of compression and a hint of EL34 dirt at higher level settings, but for overdriven rock tones you'll need to put your favourite pedal in front of it. 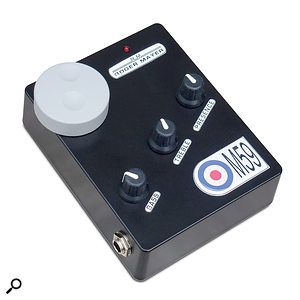 That leaves Bass, where the name is all the clue you need as to its intention. Here, the voicing is loosely based on the Ampeg SVT. Again, there are the same three tone controls, a big gain knob and the ability to saturate at higher level settings. When used clean or with just a hint of 'warmth' to the sound, this box does a great job, but push it up to 'Stranglers' levels of drive, especially if using hot pickups, and the sound becomes rather too raunchy to be pleasant unless you, again, do some post-filtering. A sharp high-cut filter helps considerably and would be the live-sound alternative to a full-blown speaker emulator.

Overall then, these preamps do as their designer intended and do so very well. However, they also come at a boutique price, and when you consider just how good a result you can get using amp modelling plug-ins in a typical DAW, the expense may be hard to justify for the typical home-studio recordist. Having said that, you can guarantee a latency-free signal path through an analogue processor, which is something that can't always be said of plug-ins or digital preamps!

Used as they come, they all do a good job on fairly clean sounds, but to my ears they definitely need the assistance of a proper speaker emulator and not just a high-cut filter to achieve totally realistic results through full-range speakers. For live use I'd also have expected to see balanced mic-level outputs as well as a thru at this price, but as things stand you need a separate DI box to create a balanced mic-level feed. On the positive side, you get a hand-built, British processor from a designer whose name is a legend in the world of effects.