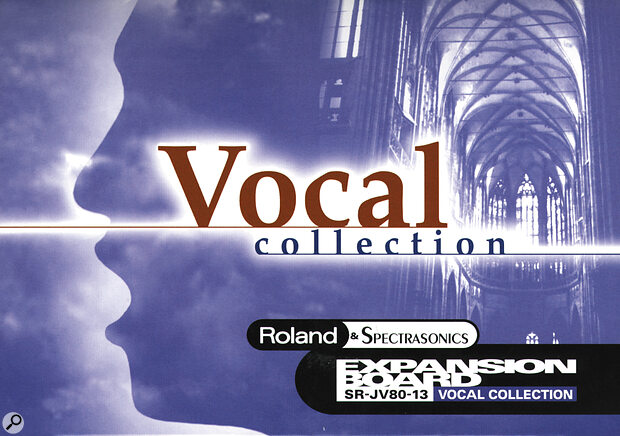 When I did the recent roundup of Roland Expansion boards in the November '98 issue, the Vocal board had been announced but wasn't shipping. Now it's here, and it's quite different to anything else in the series. Developed in conjunction with Spectrasonics, the Vocal Collection comprises 82 new vocal waveforms and comes complete with a demo MIDI file disk. About one third of these waveforms are choirs, with about the same number of jazz scat singing phrases. The remainder is mainly given over to vocal phrases, some of which are playable in reverse.

The choirs really are streets ahead of anything found in the rest of the expansion card series (or the JV's internal waveform ROM) and sound to me as though they're taken from the same sessions as the Spectrasonics Symphony of Voices CD‑ROM. There are 131 patches based on these waveforms, occasionally in combination with the JV's own internal waves, though relatively few are straight choirs. There's a huge selection of scat singing patches with velocity switching, but although the quality and realism is amazing, I can't think of a time I'd actually want to use any of them. Then again, we all have different musical needs. By contrast, the choirs are lovely, and anyone into New Age, film music or ambient music styles is certain to appreciate them. The Gregorian choir is particularly haunting, as is the Boys' choir, though there's also a full church choir for that classic big vocal wash sound.

The designers have also created a number of very textural pads using combinations of the vocal waves and the JV's synth, organ, string and other waveforms, again well suited to New Age, film music, commercials, ambient and so on. To finish, there's a selection of Amens, but the designers have also managed to come up with some patches that include reversed vocal phrase samples, giving them an eerie Exorcist kind of feel.

My own view is that although the preset examples are undeniably impressive, the real strength of this card is in allowing you to choose from a number of exceptionally good choirs to either create your own patches, or substitute for the lesser choirs in patches that you already have. Of course, if you use a sampler, you can buy the complete four‑disk set of Symphony of Voices for under £300, giving you over 2Gb of samples, but if you don't have a sampler or you want to combine vocal and synth sounds in the same patch, the Vocal Collection has a lot going for it, and it's amazing what the designers have managed to squeeze into 8Mb (16Mb of samples compressed). Paul White