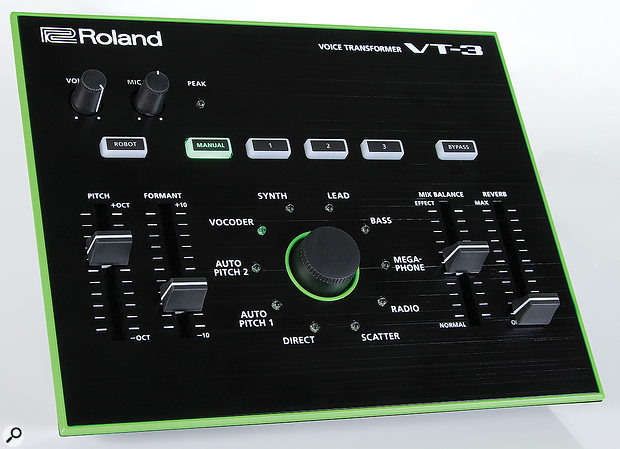 If you need authentic‑sounding robo vocals or a passable imitation of Stephen Hawking, look no further than Roland's VT3.

Once upon a time there was a vocal processor from Boss called the VT1 and it provided a convenient toolset of voice effects, from gender reassignment to Metal Mickey robotics. By performing its few tasks well and with minimum fuss, it gained something of a cult following.

Joining Roland's Aira range as the junior member is the VT3, an updated version of the VT1, but designed for the same instant gratification as its predecessor. If your voice could benefit from a little electronic assistance, read on...

The petite (210 x 175 x 57 mm) VT3 is framed by the same green plastic seen throughout the Aira range and its sliders, encoder and knobs all feel smooth and reassuring. The busy rear panel has a combined microphone/TRS input with 48V phantom power available if needed. Strangely for a voice processor, the output is stereo, although at a flick of a switch, the processed signal can be routed to the left jack, the raw input to the right. Keeping complexity at bay, there's no MIDI involved and there's a USB port that functions as a two channel 24‑bit audio interface, like the other Airas. Power can be extracted from USB too, but for the computer‑free there's a small adapter supplied.

If you have a spare sustain pedal it can be used to toggle the bypass status, and in one of only a handful of configuration options, you can change its polarity to suit the type of pedal you have. Finally, if you don't look carefully, you might miss the mini‑jack headphone socket and additional mic input under the panel at the front.

Plug and play is the order of the day and having connected my AKG D130 mic, it was just a case of adjusting the sensitivity of the input, keeping a wary eye on the peak LED, then letting rip. The central encoder's 10 positions each select a different processing algorithm and just three user memories are provided to store your favourite combinations of the front panel controls. This is considerably less generous than the VT1 and since one potential role for the VT3 is for voice‑over work, more memories would have been much appreciated. Fortunately, the VT3 is very hands‑on so this limitation may not prove too irksome.

At any time, activating Robot mode imposes a fixed monotone over any chosen algorithm, the pitch placed under direct control of a slider, its range plus‑or‑minus one octave. The pitch transitions are smooth and the slider slots neatly into a central 'untransposed' position when normality is required. Of equal importance, the formant slider adjusts the tonality of the voice, adding more feminine characteristics as it rises from the central point and becoming progressively more masculine at its lower settings. A slider sets the balance between the input and processed signals, leaving the last control to add reverb, an expansive but fixed effect that at its maximum level is quite cathedral‑like. There's a bypass button to deactivate all internal processing — including reverb — but in an interesting twist, if you make use of the bypass pedal input, it only bypasses the vocal processing, leaving the reverb unaffected.

Let's take a tour round the 10 available transformations, starting with Direct. This is the most natural‑sounding process offered, and with pitch and formant set to their mid‑points, your voice passes through practically uncoloured. Playing first with transposition, a few semitones down I started to hear a voice of far greater presence than my own. When taken towards the limits it's almost compulsory to do Darth Vader or growling orc impressions, at which point, lowering the formant slider will smooth the rough edges, making even my voice sound quite sonorous and manly. At the other end of the scale, by raising the pitch, I was able to summon the hysterical high‑pitched voice I usually reserve for ignorant shop assistants and by raising the formant level I passed through sweet soprano and straight into cartoon territory.

Using the pitch and formant levers together generates a wide variety of pretty transparent vocal modifications. It's never been easier to morph from Barry White to Barry Gibb! Certainly the results are cleaner than earlier Roland technology, such as Variphrase, and with the robot button always handy, Direct might be all the processing you ever need.

The next two options are Auto Pitch 1 & 2. Described as pitch‑correction, their attempts at following the pitch of my incoming voice were met with mixed success. Admittedly, it's been many decades since I was in my vocal prime and time hasn't been kind to my vocal cords. When I trotted out a rusty bit of Palestrina, the VT3 struggled to identify the pitch, let alone follow it reliably. In contrast, I plugged in my theremin instead of the mic and, perhaps due to the consistency of delivery and tone, the process worked far more reliably.

Auto Pitch 2 is instantly more artificial, its electronic artifacts not unlike those of Variphrase. As my latin motet renditions slipped effortlessly into Cher (not a phrase I thought I'd ever need), the blatant Auto‑Tune character became more unruly than ever. Auto Pitch 2's response to vibrato was to glitch wildly and I never fully gained control over the tuning. I suspect that to get the best out of either of these modes, you need a voice that's already pretty good and I got my most interesting output by abandoning the voice altogether and using other sources, such as a drum machine.

Next around the dial is Vocoder and with the right intonation I hit on a passable impersonation of Stephen Hawking. The vocoder is intelligible enough and whether you're aiming for Daft Punk or Kraftwerk, a little formant tweaking goes a long way in shaping the output to taste. What is lacking is a means of applying vocal characteristics to another signal — as a classic vocoder would — but I guess the priority was to keep it self‑contained and simple.

Three synth‑based patches follow, their output often at odds with the pitch of my incoming voice. With practice I made some inroads by listening exclusively to the output, treating my wailing like the input to a wind instrument. The first mode, Synth, is a dance/trance solo patch, while Lead resembles someone playing a saw. The last is Bass and it's arguably the most useful of the trio. For those who fancy an occasional synthetic bass drone, it's quite fun and in all of these patches, the formant slider operates more like a regular filter cutoff.

Of the remainder, Megaphone is a ringing, lo‑fi and rather nasal process that should cut through a busy mix or live set. The tiny manual reckons that Megaphone features distortion, but to my ears the Radio effect is the nasty and distorted one. Radio is heavily equalised for middle frequencies so again may be useful for impromptu additions over an already‑mastered mix. This leaves the Aira staple Scatter, which applies sample and repeat randomness and glitching. There's not much control over it except whatever is built into the signal detection process, but when you need to introduce a splash of psychedelic madness, Scatter could earn its keep.

With my Lancashire accent and squeaky voice, I'm a better candidate for vocal transformation than most and the VT3 is an excellent way to do it. It offers a variety of popular voice effects from a few intuitive controls and I can imagine it being widely used by theatres, vocalists, radio stations, DJs, nuisance callers and criminals demanding ransom. It's far more practical for major voice tweaks than contracting a heavy cold, becoming a cyborg, wearing tight pants or breathing helium. It's a shame there are only three user memories, but with this interface, perhaps that's enough.

The Direct process is fabulous and the vocoder isn't bad either, despite lacking the regular modulator/carrier approach for reshaping input signals. Perhaps Roland missed a trick by failing to include a ring modulator as, it seems to me, a Dalek voice would be of more value than either the megaphone or radio effects. Lastly, while the two pitch‑correction effects were slightly underwhelming, they're worth having for special effects and X‑Factor auditions.

This is an easy one to sum up: the VT3 is much prettier than the VT1 and considering its price, accessibility and bundled audio interface, I predict it will make a lot of vocalists very happy.

The VT3's back panel houses a USB port, power on/off switch, a quarter‑inch pedal input, twin quarter‑inch outputs with a bypass and mono/stereo selector switch, a switch for the 48V phantom power and a combined mic and jack input socket.

Install Roland's USB driver and the VT3 will serve as a two-channel audio interface, apparently with four inputs. To my ears the first of these pairs is simply a dual-mono translation of the raw signal, while the second is the processed signal doused in any stereo reverb that's been added. There's an optional loopback process that routes the computer's audio internally and mixes it with the output of the VT3 and it's a power‑on choice whether this function is enabled or not. As with the rest of the Aira range, the audio interface is 24‑bit.

The Boss VT1 was a rare little gem of a voice processor and the VT3 is an attractive successor with a wide variety of applications.