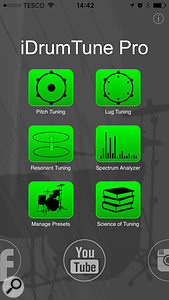 The iDrumTune Pro homepage, showing the different tuning options.Almost four years ago I reviewed a drum-tuning app for iOS from RT60 Ltd. Essentially a ‘guitar tuner’ for drummers, iDrumTune was a great little gizmo for any drummer, engineer or producer wanting to master the black art of drum tuning. It’s an app I still use, so I was keen to see what the newly released Pro version had to offer.

Still an iOS-only app (the Android version is expected in 2018), the new iDrumTune Pro includes all the features of the previous version, but with some great tweaks and extras.

For basic drum tuning, striking the drum with Pitch tuning selected displays a graphical waveform alongside a display of the strongest frequency, in both Hertz and musical note form. A Target Filter button helps focus on the primary pitch, filtering out overtones that may give a false reading, and is particularly useful when checking the pitch of individual lugs.

The Lug tuning page gives an overview of the different pitches of each lug. The user interface has been updated on the Pro version of the App: a slider lets you select the number of lugs, to match your drum, and you simply tap close to each lug in sequence. Tapping the drum next to the first lug displays the fundamental frequency, and subsequent taps around the drum displays how much higher or lower in pitch each lug is,compared to the fundamental. This makes the ultimate goal of equalising all the lugs of a drum a very quick process. 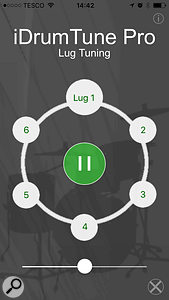 The Lug tuning page gives an overview of the different pitches of each lug.The Spectrum Analyzer gives a more detailed view of the frequencies and overtones produced when a drum is hit, the two main elements being F0 (the fundamental basic pitch produced at the centre of the drum) and F1 (the ‘overtone’, produced at the edge, closer to the lugs). You can really see what’s going on if you have a drum that is difficult to tune, or if you want to notch out overtones with EQ.

Most drums have two heads: a batter (which you hit) and a resonant head on the bottom. Both heads have a significant bearing on how the drum sounds, and the brand-new Resonant Tuning page helps manage that by measuring the F0 and F1 frequencies of the batter head and calculating a ratio between them. The app suggests a ratio of 1.5 as a good benchmark to aim for, as it represents a perfect fifth. The pitch of the resonant head has a direct effect on the F0 frequency (and a lesser effect on the F1 frequency also), so by loosening or tightening the resonant head you change the ratio and therefore the sound of the drum.

Obviously, you’re getting some pretty sophisticated and useful data from this app. Luckily, the guys at RT60 have introduced the Manage Presets page, allowing you to save and retrieve any number of kits, comprising any number of drums, along with the fundamental (F0) and edge (F1) frequency for each.

Finally, we come to the The Science of Tuning. This offers a combination of ‘how to’ and ‘why to’ instruction, with detailed explanations of how each feature of iDrumTune Pro works, in addition to comprehensive and useful background theory on drum tuning.

All in all, iDrumTune Pro is very handy. It’s extremely accurate and has features — particularly the Resonant tuning and detailed spectrum analyser — that I’ve not seen on any other app, and which allow you to delve that little bit deeper into the mechanics of drum tuning.

You’ll still need the two most important elements in drum tuning — a drum key and your ears — but in combination with those, iDrumTune Pro is a fantastic tool for both drummers and studio engineers seeking that perfect drum sound. It’s a Swiss Army knife for tuning drums.