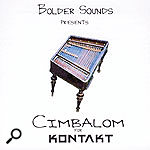 The cimbalom is the largest instrument of the hammered dulcimer family, and the Hungarian national instrument. It spans 4.5 octaves, and is played by striking the strings with mallets. The instrument sampled here has 125 strings, removable legs, and two bars and a foot pedal to control damping. It has been sampled at 24-bit resolution by Dennis Burns of Bolder Sounds, and the programs created specifically to take advantage of the facilities within Native Instruments Kontakt.

The library contains 28 programs, the largest 384MB versions providing two switched velocity layers of sustained samples and one of damped samples, crossfaded using the mod wheel. Versions are offered switched at either MIDI velocity 75 or 100 to suit your keyboard and technique, and other programs make use of Kontakt 's reverb.

Despite only having two layers, these programs are very expressive — the most effective way to play this cimbalom library is with the sustain pedal down most of the time, raising it occasionally to simulate the action of the dampers. A couple of samples in the mezzoforte layer do stick out slightly when soloed, but you don't notice this in a real performance.

The remainder of the programs are smaller, using one or two samples per note, but with well-programmed use of the one-pole low-pass filter to provide velocity expression. They are offered with optional reverb, or with one of a wide range of creative treatments whose depth is mapped to the mod wheel, including attack speed (which creates a lovely rich swelling sound at slower settings); high-pass, low-pass, and multi-mode filters; and parametric EQ. There's also an extended version which covers six octaves.

Although there are various sampled hammered dulcimers available (including a modest one in Bolder Sounds' own range), as far as I know this is the only cimbalom library in existence, and its richer and deeper resonances provide it with a unique sound. For about the same price as a pair of cimbalom mallets, this library has to be a bargain. Martin Walker 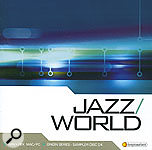 Jazz, perhaps the most promiscuous of all musical styles, seems to love getting into bed with other types of music, and clearly isn't picky. There's jazz rock and jazz funk, jazzy house and drum and bass, and, more pertinent to this review, latin jazz and afro jazz. On Loopmasters' Jazz/World sample CD, the emphasis is firmly on the jazzy side of South American and African music — Glenn Miller fans need not apply! The CD features percussion, double-bass, flute, guitar, piano and saxophone loops, plus a multi-sampled double bass (with associated Propellerhead Reason NNXT sampler file) and a range of individual percussion hits. The individual files are clearly labelled with name, tempo, and key where applicable, and are arranged in folders by tempo, although the library is not packed in Refill format as might be suggested by the Reason logo on the packaging.

For me, the drum loops are the best thing here — they're interesting, well played, and nicely recorded. They cover 65-140bpm, and for each pattern the kit, the percussion (in most cases congas), and the full ensemble (plus fills for each) are available separately, which means that you can make the limited number of patterns go quite a long way. There are also 64 WAV files of individual hits, covering the kit drums, congas, and djembe, although they've not been arranged into kits for Redrum or patches for NNXT.

The double-bass loops are much less polished than the drums. There's a constant high hiss and spill from other instruments is audible if you solo the samples, although the latter isn't really noticeable when combining the bass loop with a drum loop of the same tempo. The performances are also a little haphazard, with lots of finger and string noise, but, on the whole, they steer closer to 'characterful' than 'messy'.

The four multi-sampled double-bass patches provided for NNXT suffer from similar problems which, in this case, are less forgivable. The samples are rather short, many with a pronounced 'clunk' at the end, and on one of the patches the samples are mysteriously all panned slightly to the left. Another patch suffers badly from hiss, while tuning goes awry in the lowest octave.

The remainder of the library contains a smaller selection of flute, guitar, piano, and sax loops, all designed to sit happily with other loops in the same key and tempo. There are some nice breathy flute licks; single-note and chordal riffs covering Latin-American nylon-string and heavily chorused West African electric-guitar styles; predominantly Latino piano chords and runs; and some tinny, African-style ensemble sax playing. There's also a folder of way-out solo sax noodling, probably the least World-related material on the CD.

Jazz/World 's strong suit is that it's very easy (and rather fun) to pick out a drum loop, add bass, guitar, and flute, and knock up a convincing bit of music in just a couple of minutes. But this is also the library's main weakness: while the loops are not overtly presented as construction kits, that's effectively what they are and therefore I fear much of the library will be of limited use elsewhere. David Greeves 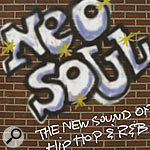 This four-CD set comprises loops organised into nearly 50 construction kits. While the loops can obviously be time-stretched, the majority of the original tempos are below 95bpm. Each kit includes one or two (occasionally more) drum and bass loops that form the foundation. These are then generally supplemented by some combination of keys, synth, guitar, or string loops, with the occasional brass, percussion, or woodwind loop thrown in for good measure. The loops seem to be very well recorded and many have well-judged reverb or delay processing applied. The drum loops in particular have plenty of punch — and although some users may have preferred the snares to be a little drier, the sound is tight and tasteful.

In many of the construction kits, it is Rhodes and wah-wah guitar that are the key elements. This combination, and the dominance of slower tempos, perhaps hints at the styles these loops are aimed at. 'New' or otherwise, the hip-hop and R&B reference in the subtitle is definitely right on the money, but the moods are generally very smooth — these loops are ideal for constructing tracks with bedroom-orientated lyrics! If you think along the lines of Beyoncé's 'Be With You' and 'Me, Myself And I' (both from Dangerously In Love) or The Black Eyed Peas 'The Apl Song' (from Elephunk), then you will be in the right ball-park.

Some of the construction kits might also work in other musical contexts. For example, it is easy to imagine Sting's voice sitting over the kit named Deep Pockets, with its harp and acoustic-guitar loops. Equally, at really slow tempos, the combination of gentle Rhodes parts and the occasional wah guitar line might work for a chill-out track (think 'Passing By' from Zero 7's When It Falls).

In use I found that it proved perfectly possible to mix and match between kits, as long as I took care when combining a chord sequence from one kit with a melody line from another. Perhaps my only criticism would be the relatively few drum-loop variations within each kit, so you might quickly find yourself reaching for Recycle. The drum sounds used are pretty consistent across a number of the construction kits, however, so loops could also be combined in that way.

Otherwise, if mellow, classy R&B or hip-hop is your thing, Neo Soul provides a fine collection of loops and represents good value for money. John Walden

Vienna Symphonic Library's Horizon series gives a taste of their fabulous samples at affordable prices. As well as presenting themed titles based on their megatastic 250GB orchestral Pro Edition, the Horizon disks branch out into non-orchestral territory, offering a brace of fine guitars, the first of these being the 11.9GB Vienna Concert Guitar. Played finger-style throughout, the nylon-stringed acoustic guitar has a rich, mature tone which is capable of both intimacy and bite.

Its sustained notes (played with and without vibrato) were sampled at three dynamics, with an extra layer of metallic 'sul ponticello' (played near the bridge) samples kicking in at high velocities. For more lively rhythmic passages, there are staccato notes (ideal for jazzy chordal stabs), and muted étouffé (choked) samples, while softer, flautando performances give a subdued, almost harp-like timbre. Some strident Bartok-style string snaps could be useful for Flamenco simulations!

Other variations include percussive 'hammered' left-hand notes, tremolos, and a comprehensive, very pretty set of natural harmonics. Accompanying these Cinderella multisamples are the usual 'ugly sister' noises: woody knocks and thumps, string squeaks, behind-the-bridge plinks, and so on. There are no licks or runs, but semitone and whole-tone trills, along with some rather laborious semitone bends, offer some pitch variation.

There is also a huge selection of consonant and dissonant chords, including some of the jazzier shapes. These are presented in a choice of six-, five-, or four-string voicings, and a separate menu of three-note chords is also supplied. All chords are played in a variety of strumming styles (including Flamenco-style tremolo), open, muted, and arpeggiated, each available at the push of a keyswitch. The mapping system is very flexible: you can choose a single chord type mapped chromatically, or select all the chords based on a particular scale (say, 'E' major) — an impressive organisational feat.

No VSL release would be complete without the mighty Performance Tool, a fantastic, expressive MIDI device whose legato mode produces convincingly joined-up melody lines. The sharp attack of a single, articulated classical guitar note militates against the sort of fluid legato produced by a violin or wind instrument, but when used in conjunction with carefully edited 'performance legato' samples of hammer-ons, pull-offs, and glissando slides, the effect can be breathtaking.

The Tool also handles real-life performance repetitions of up to nine notes in a variety of styles, tempos and dynamics. For their Horizon series, VSL devised two new legato modes, which have been incorporated into version two of the Performance Tool — earlier versions do not function properly with the Horizon legatos, as they use a different note-mapping system.

Needless to say, the recording quality, miking, and overall attention to detail is exemplary. This superior instrument's precise, classical delivery ensures that melody lines can be articulated with great clarity, and its distinct, slightly sharp-toned attack works well for emphatic rhythm licks and arpeggios. Some might prefer a plummier, more rounded sound for use in quieter ballads, but if it's realism you seek, nothing on the market comes close to this classy title. Dave Stewart