This library follows up Dirk Campbell's popular and meticulous World Winds. This time his aim is to document the evolution of the musical instrument as it spread from the middle east, though of course near descendents of many of these instruments are still played today. Furthermore, many modern instruments can be traced back to less sophisticated ethnic instruments, some of which go so far back that in some cases we have no idea in what style they were played, even though we may know how to recreate the instruments themselves. 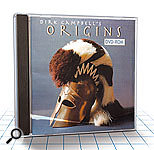 In this dual-format library, which extends to around 3.5GB (of which around 2GB are newly sampled world wind instruments), there are sections devoted to ancient horns, flutes, pipes, stringed instruments, vocals, percussion, sound effects, some pads, and drones made up by combining instruments (such as singing bowl and flute). The horns include things like Roman war horns and various animal horns, while the flutes cover most of the ethnic groupings and include Chinese flutes, the evocative duduk, the ney, the Welsh pibgorn and the Indonesian suling. Strings encompass things like zithers, the African kora, and various bowed instruments, while percussion ranges from ancient to African recycling, with drums made from old cans and car parts. In the sound effects department you'll even hear swords beating on armour! In many cases, the pitch range of the original sound has been extended to allow additional creative freedom.

Despite a few outlandish inclusions, what this library offers is, in the main, playable multisampled instruments with a range of articulations and styles making extensive use of velocity switching, though there are also many complete phrases that show off the instruments to advantage and are suitable for weaving into compositions. Where possible the instruments have been left sounding as natural as possible, but some samples have been nudged into pitch to make them more usable. The vast majority of the instruments are monophonic (other than the double pipes), and though some of the instruments can be played as indefinitely sustaining loops, most are long enough that they can be played more naturally with the looping turned off.

As you might expect, some of the sounds are better suited to historic film and TV programmes than to general music, but even viewed as a selection of ethnic and unusual world sounds, there's a lot to commend this library. I particularly like the wind instruments, but the singing bowls, Eastern percussion, and harmonic throat singing also stand out as being exceptional. Even the small selection of drones and pads is excellent, combining usability with a nice organic quality. There's a lot more to this library than first meets the eye, and I have no hesitation in recommending it to anyone who likes to use world instruments. Obviously some of the sounds have counterparts in other ethnic libraries, but a lot of what you'll find here is unique and very musically usable. Paul White

I reviewed Scarbee's RSP73 (a Rhodes Stage 73 MkI) and WEP (Wurlitzer 200A) sampled electric pianos in SOS in March 2003 and May 2004 respectively, and felt both renditions were 100 percent accurate and highly playable. Since then, two more vintage keyboards have received the Scarbee treatment: the Clavinet D6 and the rare Pianet N electric piano, both made by Hohner. Known respectively as the D6C and NHP, these two are available together with the RSP73 and WEP in Scarbee's Vintage Keyboard Collection, which when bundled with the Vintage Keyboard FX plug-in constitutes the Keyboard Gold Bundle (or KGB for short). Reviewing a product named after the Soviet secret police makes me a little nervous, but here's goes anyway...

The original Clavinet's pair of tone switches (labelled A-B and C-D) offered a total of four different settings, and Scarbee have done a full sampling job on each one. To recreate the attack of Stevie Wonder's funky Superstition you need the CB version; DA has even more bite, but is a little more nasal. The rounder, more melodic tone of CA is excellent for chordal work (especially arpeggios), while DB sounds like a cross between a steel-strung acoustic guitar and a small single-stop harpsichord. Four great sounds, each beautifully sampled.

All four Clavinet settings have a 'mute bar' version — this original feature deadens the sound and creates a more percussive, muted-guitar-like effect which is useful for single-note rhythm patterns. There's also a separate volume control for the bass strings, which tend to be over-loud on a real Clav. Both the Clavinet and Pianet can now be played using a sustain pedal, a distinct improvement on the originals.

The Hohner Pianet was made famous by Rod Argent on The Zombies' 'She's Not There'. Its mellow, somewhat reedy tone and pleasant, harp-like plucked attack (created by a sticky pad pulling away from a metal reed — how mad is that?) have been reproduced here with great precision. The unit's distinctive vibrato is also faithfully replicated, and its annoying note-off clicks can now be turned off. I must declare an interest at this point: the Pianet here is mine — I lent it for the project, but receive no payment or benefit from sales. This could be seen as creating positive bias, but it also means that I'd be the first to notice any sampling flaws! Hand on heart, I can say that there aren't any.

Back in the day, these keyboards were usually recorded through an amp and speaker and often processed through effect pedals. Scarbee's Vintage Keyboard FX VST/AU plug-in addresses this by providing an amp simulation based on a Fender Twin Reverb (spring reverb and all) along with seven other processors, including Mutron-style auto-wah, phaser, compressor, overdrive, chorus, and delay. Four essential, superbly-sampled '70s keyboards in one package — highly recommended. Dave Stewart

M-Audio's Pro Sessions series of instrument samples and loop libraries is well established and aims to offer a combination of great sounds and good value for money. The loop libraries — of which there are dozens — cover a wide range of musical styles and are very competitively priced. In an effort to provide more bang for your buck, M-Audio are also now making some of these titles available as discounted three-library bundles. One such bundle is under review here, combining These Drums Are Loud, Discrete Drums: One Big World, and Discrete Drums: Rock Drums. All of these feature acoustic drums or percussion loops of some type and include individual hits of the various drums used. However, the stylistic content and structure of each title is somewhat different. 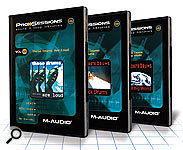 These Drums Are Loud is split into three parts; a series of over 250 loops in 11 themed sets, a separate folder containing fills, and a further collection of over 250 individual drum hits. Given the title, you might be forgiven for thinking that this collection is aimed firmly at the harder end of rock but, in fact, these loops could work in quite a range of musical styles — the 'Loud' seems to have more to do with the recording style than with the intensity of the playing. Folder titles such as Acoustic Rock and Brush contain loops that would be at home in either a U2 or Led Zeppelin track (think their more acoustic-tinged material), but things do get into heavier territory in the Oh Behave and SRV folders and this library could sit quite happily under anything from pop punk to modern rock. Throughout, there is a surprising amount of groove to these loops, and the playing has a lot of feel. I had no problems mixing and matching the loops together and, by adding a few fills, it was easy to construct a complete drum track using just these loops. The single hits are well recorded and, if you need to add further variety by constructing a few of your own loops, there is plenty of choice in terms of kicks, snares, cymbals, toms, and hi-hats, with some brush work thrown in for good measure.

Discrete Drums: One Big World contains 18 construction kits, generally featuring between half a dozen and a dozen loops. These each contain a layer based on a single instrument — for example shaker, tambourine, bongos, or dumbek. This approach works well and, in use within Acid Pro 6, it was easy to layer these loops in different combinations to create different feels and textures. This collection has two other useful features — a 'full mix' loop for easy auditioning and some 'end' one-shots so you can construct a proper ending. In addition, for each construction kit an equivalent folder contains a series of individual hits covering all the drums and percussion sounds used within the loops.

The library title makes it very clear what the musical intention is here — these are percussion-dominated and would suit a wide range of ethnic musical styles — although they would also work in a quirky, acoustic pop context or as part of music-to-picture projects. The moods go from dark and mysterious (Agony Of The Feet) through to vibrant and tribal (Funk Juice). The material is well played and always interesting — while auditioning, some of the grooves had me reaching for an acoustic guitar to jam along and they could easily form the inspiration for a songwriting session.

The balance of the content for Discrete Drums: Rock Drums is somewhat different from that of the other two titles. While this collection does include some construction kits, there are only four of them. As suggested by the title, these are suitable for rock, although they would work with a number of different flavours under that broad heading. Each of the construction kits features a good choice of loops. For example, there are 25 loops in the Rock Head construction kit, covering song sections such as verse, bridge, intro, ending, fills, and chorus, with alternate versions for all these sections. As a result, it is very easy to build a complete song arrangement with plenty of variation, creating something that sounds convincingly like a live drummer.

Two of the kits feature various subfolders, where the drum and percussion layers of the loops are separated. There are also individual drum hits for those who want to build their own loops for added variety. The remainder of this library consists of a large collection of individual drum samples — 174 in total — covering snares, kicks, toms, cymbals and hi-hats played with both sticks and brushes. Within a suitable software sampler, these could easily be built into a full multi-sampled drum kit. Interestingly, the samples are provided both in dry and 'room ambience only' versions, and by changing the balance between any two paired samples, it is possible to control the amount of 'room' given to the kit sound in a fashion that is much more convincing than using a standard reverb plug-in.