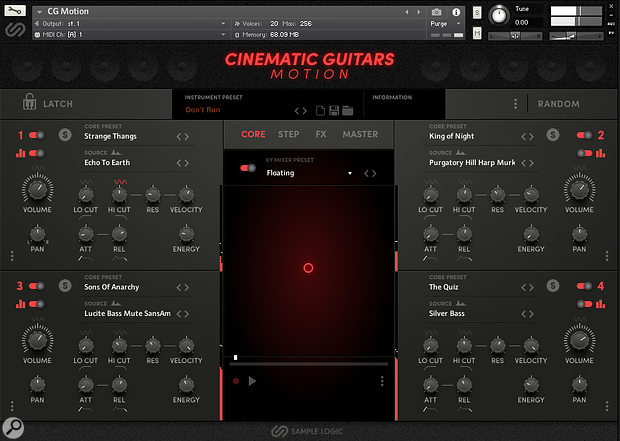 Sample Logic's Cinematic Guitars series is a well-established part of many a media composer's sonic arsenal. Built around sample sets derived pretty much exclusively from guitar sources, the front end combines 'quad core' sample playback (four sample engines can be combined in a single preset), sophisticated effects for each core and a master effects chain, step-based control of both effects and pattern/arpeggiation plus an XY pad to create additional sonic motion, and that can also be animated. Shipping with massive collections of presets, and tools for randomising sound creations so something new can always sit under your fingertips, they have supplied many a cue for films and TV shows.

The latest iteration of the franchise is Cinematic Guitars Motion and users of the earlier titles (such as Cinematic Guitars Infinity, reviewed in SOS December 2015 issue) will find lots that's familiar in terms of workflow. However, this time around, Sample Logic have brought the UI bang up to date, made some changes under the hood, enhanced various aspects of the feature set and, of course, built the latest title from a brand-new 33GB library of samples.

Requiring a full version of Kontakt 5.8.1 or later, it has to be said that CGM is an impressive beast. With over 850 instruments and presets included, there is plenty to explore even before you dig into the multitude of possibilities offered by the powerful front-end. The 'motion' part of the title is apt as many of these presets make very good use of the step-based pattern features, the effects and the XY controller that can adjust the blend between the four sound cores in real time. And, while I was perhaps a bit surprised that the new and improved preset browser didn't include a 'rhythmic' tag amongst its other useful descriptors, as so many of the preset sounds offer rhythmic elements — either via note arpeggiation or step-based effects — CGM can easily set the pace of a cue as well as create its harmonic/melodic properties.

There are lots of presets here that could easily generate a complete short cue without the need for any other sound sources. Whether used for tension, action, drama or more melancholic and calm moods, CGM is a powerful tool once you dig in. Perhaps the only other thing to note is that, while there are plenty of organic types of sounds included, this is perhaps more of an electronic or synthetic sound source. It could, however, easily be combined with more traditional orchestral-type sounds.

As with earlier Cinematic Guitars titles, pricing suggests this is targeted at the working media composer and, if that's you, and deadlines are always short, then Cinematic Guitars Motion will most certainly warrant serious consideration. Hefty in size and price but matched by some equally hefty sonic possibilities.