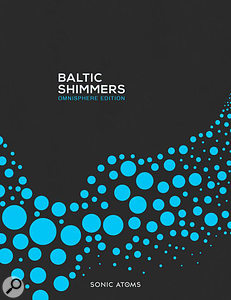 Originally developed for use with the free Halion Sonic SE 3.4 sample player, Baltic Shimmers is now also available as an expansion pack for Spectrasonics Omnisphere and is described by its Polish creators as a collection of ambient sounds inspired by the sea. Sound sources include the sea, birds, acoustic and electronic musical instruments, and a lot of processing, which apparently includes recording many of the sounds to tape. While the sounds were created with film and game scoring in mind, they also work well on minimalist music.

The instruments are categorised as Shimmers, Pads and Drones, each with its own set of presets. In all there are 144 presets and the pack includes around half a Gigabyte of samples. Sounds in the Shimmer category can be made to morph in three stages from a fairly static sound into something more motional, which the designers suggest is the equivalent of going from a clean sea to waves or foam. Some work as evolving pads while others are better played as single notes. Sounds in the Drones section can vary in level, timbre and sometimes pitch as they evolve, so they are best suited to single-note work. These vary from tranquil to mildly disturbing. Drones work best played monophonically and tend to evolve over a long period, which can be extended by applying modulation.

Pad sounds are made up from three layers, the first two of which are long, textural sounds played either forwards or backwards, while the third is a sea type of sound triggered when the key is released. I found that Omnisphere's Orb provides an easy way to add further dynamic variation to the sounds. The mod wheel generally affects patches by changing their level or character. Some of the patches have an element of cloudiness about them while others pulsate and flow.

Baltic Shimmers is perfect for its original game and film design brief but it also has a role to play in experimental, chillout and minimalist ambient music composition.

Many of the sounds make ideal beds for minimalist music with the long, evolving sequences keeping things interesting without being too attention grabbing. If you make relaxation music, then head for the Pads section — just add a reverb-soaked piano melody and you're home.

All the sounds have an organic quality about them. You wouldn't generally use these types of sound to play melodies, but the pads work well for sparsely voiced chords. You can also create your own sounds by taking layers from the different presets and recombining them so there's plenty of scope to push the boundaries if you don't mind a little light editing. Similarly, changing Omnisphere's filter settings, using the Orb or changing effects helps ring the changes. Given its low cost and the high quality of the sounds on offer, Baltic Shimmers is perfect for its original game and film design brief but it also has a role to play in experimental, chillout and minimalist ambient music composition.