Sample library creators are always trying to come up with fresh ideas for products, and this is possibly why Sample Logic decided to record the sound of a man smashing to pieces a perfectly good upright piano for their Cinematic Keys instrument.

The piano demolition, which took place in a garage and was done using a sledgehammer, scythe, machete and blowtorch, amongst other things, is certainly an intriguing aspect of the 8GB library, but it is still only a part of it. SL have also sampled grand and upright pianos in more conventional fashion, and there are harpsichord, Wurlitzer and toy piano recordings too. Apparently a few of the toy instruments got smashed as well, but some of the less destructive sound creation methods include strumming, plucking and E–bowing the strings of the instruments.

Each instrument file is pretty much a composition in itself, and many include a rhythmical element as well as various melodic and evolving parts. Names like Desert Platoon Recon, Fear Of The Beast and Parasitic are representative of the kind of game score–style compositions on offer.

The rest of the instrument uses the more common ‘single instrument’ (.nki) file format, and all share the same interface design. Sounds that are useful for textural work are found in the Atmospheres folder, which contains sub–folders called Ambience and Stingers. In both categories, the emphasis seems to be on synth–based sci–fi sounds with a retro feel. There are plenty of squelching filters in the Ambience folder, for example, and a variety of eerie noises in Stingers.

Anything rhythmical is found in the sub–folders of the Percussives menu. Here the folder options are Hit Ensembles, Impacts, Kits, Loops, Sequenced and Transitions.

Obviously the Kits instruments provide sets of sounds that can be used as virtual drum kits, and the Loops provide a constant rhythmical backing when a note is held down. 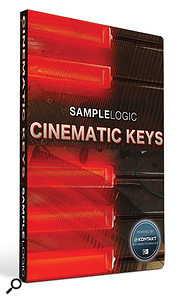 The Sequenced instruments differ in that they features SL’s Step Animator sequencer, borrowed from one of their other products called Arpology. In short, the tool is an easy–to–edit sequencer offering control over a number of parameters that affect each and every sequencer step. If, however, the sequence assigned to the instrument file is not satisfactory, other presets, including user programs, are available in a drop–down menu.

Importantly, the Step Animator can actually be used on any .nki file, it is just that its default setting is ‘off’ for most of the patches.

Although the Impacts and Transitions live in the rhythm–oriented Percussives folder, in many cases they also function very well as stand–alone sound effects. In Transitions, for example, I found an instrument called Magic Wish, which sounded as if someone had created it by dragging a soft pick across the strings inside a piano.

The more standard keyboard sounds are collected together in the Instrumentals section and are categorised as Arpeggiated, Harpsichord, Organs, Pianos Acoustic, Pianos Effectual, Synths, Toys and Wurlitzer.

Once again, Arpology’s Step Animator is used for the Arpeggiated instruments, but this time it is driving keyboard sounds rather than effects. The Freeing The Unicorns .nki, for example, features a fairly straightforward-sounding grand piano treated to some energetic arpeggiation.

Central to the working of Cinematic Keys’ interface is the effects panel, which permanently displays the status of 12 effects that can be used on each instrument file. The options are Filter, LoFi, Distortion, Wave, Delay, Reverb, Dyn (compressor), EQ, Triggers, LFO, Arg (arpeggiator) and Mixer. Clicking on any one expands its control panel so that all of its parameters become accessible, whereas a second click folds them neatly away again.

Most of the Kontakt instruments I’ve used of late have had very flashy interfaces designed to look like something from a sci–fi movie, so it is refreshing to see all of the effects and processors laid out very simply. My only criticism is that the interface does not allow the user to see their routing, or to drag the effects into a different order.

One Sample Logic innovation that makes its debut in Cinematic Keys and turns the product into a very powerful processing tool is the Effects Animator. It works pretty much like the Step Animator, but instead of there being a single instance of it applied to the overall sound, seven of the effects have their very own Animator.

Sequencer steps can be as few as two, or as many as 128, and there is control over the level and duration of each one. The user is given a choice of either dragging the fader of each step and adjusting its duration to a specific value, such as 1/16 for example, or drawing in a curve with the mouse. Other options include Invert, Random and Sync to Step Animator, and there is a menu of presets too.

It is great that SL played the original instruments in unconventional ways to generate unusual core samples, but the extra work has come at a cost, because Cinematic Keys is rather expensive relative to Kontakt instruments that have less core content. On balance it is probably fairly priced given that it’s a sizeable product, but I suspect that many people will take some convincing before they part with their cash.

Overall, though, the library is a great mix of bread–and–butter keyboard instrument samples and innovatively created sounds, all accessed via a pleasingly straightforward, but very powerful, interface, and because of those attributes it is likely to keep composers interested for a long time. Tom Flint