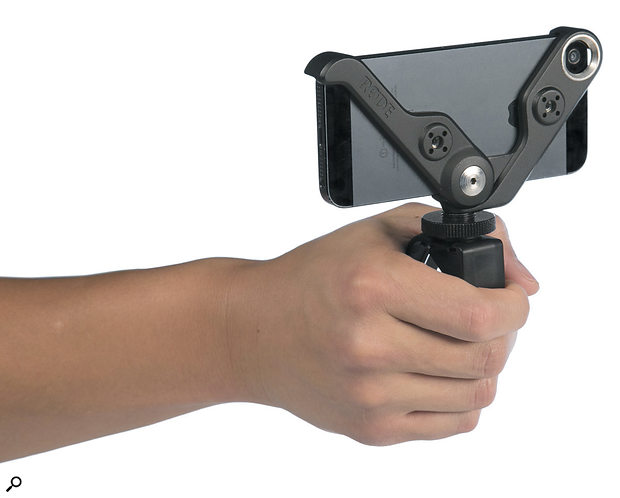 The Rode Grip in its hand-held configuration.

These days it seems that making phone calls is the least of an iPhone’s skills. Even the internal mic allows it to double as a passable audio recorder, but add one of Rode’s iXY stereo mics and you have the makings of a seriously good audio capture device. Now Rode have come up with a versatile mounting system that clamps on to the iPhone and offers a number of mounting configurations including horizontal or vertical camera shoe mounting, hand-held pistol grip and free standing. All this is accomplished by means of a very clever piece of plastic ‘origami’, whereby the mount comes folded up inside the framework that makes up the pistol grip. There’s even space to store the included Allen key for changing the shoe configuration.

The main part of the system comprises a pair of hinged arms that terminate in sections shaped to lock over the edge of an iPhone. A third phone grip point is located above the pivot point, below which is a camera-style shoe mount with a standard 3/8-inch thread. Unfortunately the thickness difference between the iPhone 5 and earlier models means that iPhone 4s won’t fit, but Rode offer a range. The shoe can be removed courtesy of the included Allen key and repositioned into one of two other threaded inserts on the arms of the clamp, allowing for horizontal rather than vertical mounting on either a camera, the pistol grip or any other device with a camera shoe fitting.

Two shoe locations are moulded into the pistol grip, one at the end for normal hand-held use and one amidships for use as a table-top stand. A thumbwheel screw above the shoe allows it to be locked in place in the usual way.

Now it might seem that making all this out of plastic is asking for trouble, but Rode have used the type of structural plastic used for making belt buckles and other robust parts, so accidental damage seems unlikely. There are also metal inserts at the pivot point and at the alternative shoe-mounting points, so thread stripping is equally unlikely.

The Rode Grip is a great example of practical engineering and it does exactly what it is supposed to do while taking up the minimum of space in your kit bag. It is strong, light and versatile. If you make regular use of your iPhone as an audio recorder, you really need to get one of these.