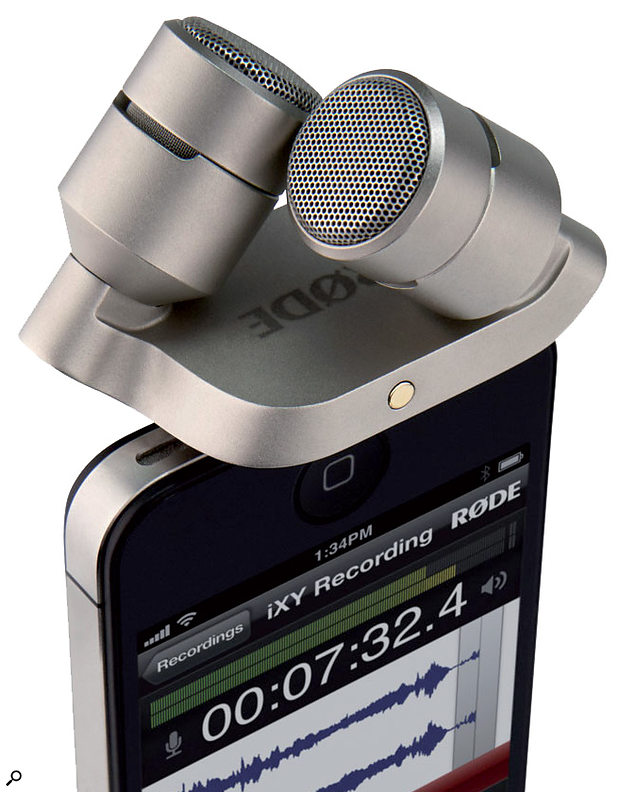 With the advent of iThings and apps came the expectation that pretty much anything you could run on them or plug into them would be cheap and cheerful. But to make the best possible use of their 24-bit, 96kHz recording capabilities, you need a good microphone, which is where the Rode iXY comes in.

Built in Australia, the all-metal iXY comprises a pair of cardioid capacitor capsules in an X/Y configuration with 24-bit on-board A/D conversion, and is claimed to be the first professional-quality iOS stereo mic. It comes with a protective zip-up pouch and windshield and offers plug-and-play operation with Rode's own Rode Rec or Rode Rec LE apps. The mic is also compatible with many other software recording apps, but 24/96 recording is only possible using Rode Rec. As Rode Rec LE is free and Rode Rec costs just £3.99$5.99, there's little point in using anything else.

These apps both allow adjustment of the mic gain and of headphone monitor level, though the full version also offers a parametric EQ, compressor, expander, multiple file-format export facilities supporting Dropbox and SoundCloud, a wider choice of sample rates, and audio editing facilities such as cropping and looping. It also boasts 15 iZotope input processing presets, metadata capability and variable playback speeds, so at slightly more than the cost of a pint of beer, it's probably worth having! For straightforward recording, though, the LE version works just fine and saves each recording as a separate file.

Rode's iXY is currently compatible with the iPhone 4S, iPhone 4, iPads up to and including the iPad 3 and the iPod Touch 4, but not with any device sporting the new Lightning connector. However, an updated iPhone 5-compatible model is planned for the near future, with a paid upgrade path for users wishing to change at a later date. Alternatively, I'm told that an Apple video adaptor also works.

Offering a full 20Hz to 20kHz frequency range, and tolerant to SPLs of up to 120dB, the mics are specified with a sensitivity of -42dB ref. 1 Volt/Pascal (8.52mV at 94dB SPL) +/- 3dB at 1kHz. Power is provided by the connected iOS device. The weight of the mic array is 40 grammes and it measures 46 x 55 x 40mm. An LED indicator shows green when the iXY is connected.

For normal speech recording and sources such as acoustic guitar, the background noise is acceptably low, so there should be no problem recording band rehearsals or other louder sources. Some of the Izotope presets in the app seem to include compression, which can bring up background noise, but when recording 'straight', there's no problem as long as you remember to switch off the Mic Thru in the app when playing back files, otherwise the mic input remains live. The iXY sounds good, works as it should do, and as an alternative to buying a separate flash recorder, it makes a lot of sense.