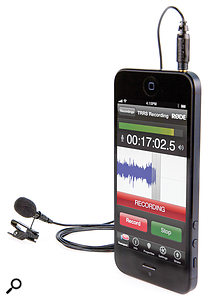 The SmartLav with the Rode Rec recording app.

The popular Australian microphone manufacturers have extended their small but growing range of mobile device microphones with the new SmartLav personal 'lapel' mic. Like the iXY mic we looked at in SOS May 2013, the new SmartLav is a conventional 'lapel' or 'lavalier' microphone designed for use with most mobile phones and tablets (Rode list around 125 compatible models from Apple, Google, HTC, LG, Motorola, Samsung. The SmartLav is terminated in a four-pole (TRRS) mini-jack plug, so you can expect it to work with pretty much any smartphone.

Sadly, the nanny state appears to have reached as far as Australia, as the mic cable is threaded through a lurid warning tag advising any customers with IQs in single figures that it presents a strangulation hazard! Arrrggghhh!

Fortunately, I managed to avoid strangling myself, and so I can tell you that the omnidirectional electret microphone capsule is pretty slim. It measures just 4.5mm in diameter and about 25mm in length, and is fitted with a 1-metre Kevlar-reinforced cable that is about 2mm in diameter. The SmartLav is supplied with a removable 'water-resistant' foam pop-filter and a single horizontal mounting clip (with a very useful cable-management slot to minimise cable noise). There is also a little drawstring storage pouch, which is a thoughtful feature.

The capsule can be inserted into the clip easily in either direction, to suit the desired mounting orientation on the artist's clothing, with the pop shield slipped over the top, if required, afterwards. Normally, the mic would be clipped to a shirt placket (the thicker bit in the middle with the buttonholes) or a jacket lapel, and the cable tidied neatly away ('dressing' the cable is important, as it can transmit noisy rustles to the mic if you're not careful). The built-in cable-management slot in the clip is a big help in this respect.

As the mic has an omnidirectional capsule, the actual orientation (up/down/sideways) doesn't really matter as far as being 'on-axis' is concerned, but I've often found that mounting lapel mics upside down provides useful protection against air-blasts from the artist's nostrils, something that is surprisingly common!

With the four-pole connector plugged into a smartphone running suitable recording software, you're ready to go. Rode offer their own Apple iOS recording app in two forms: the basic but free 'Rec LE' version, and the full-fat 'Rec' alternative at £3.99$5.99. (Both require iOS 5.1 or later.) I tried the SmartLav mic with an Apple iPhone 5, an iPad, and an HTC Desire (Android) phone, and achieved excellent results with all three. For a £40$60 mic, the Rode SmartLav turned in a very credible performance and can be recommended.