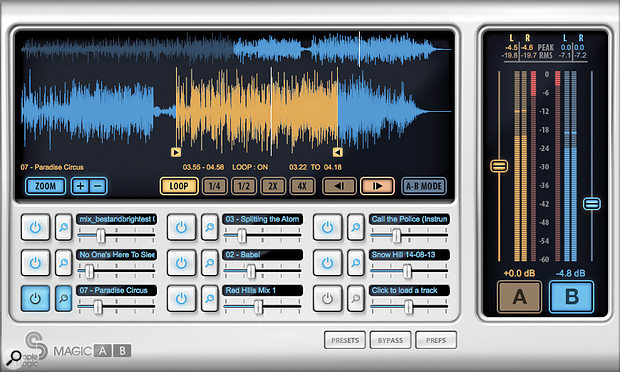 We've often extolled the virtues of referencing your mixes against commercial tracks in the pages of SOS. The act of referencing, commonly known as A/Bing, refreshes your ears and, if done quickly, can help reveal flaws in your own mix. For the full low-down, check out Mike Senior's September 2008 article on creating a reference CD (http://sosm.ag/sep08-reference-cd).

A/Bing is easier if you're working in a hardware studio, where you can connect a media player to your mixer or monitor controller and switch back and forth between your working mix and the reference audio. Setting up comparable arrangements within a DAW, by contrast, requires forward planning in terms of routing, level matching and muting channels that contain reference material. That's where Magic AB comes in. Conceived by Marc Adamo, it's the first plug-in from sample library specialists Sample Magic, and is available in 32- and 64-bit VST, Audio Unit, AAX and RTAS formats. Magic AB is a specialised media player plug-in that allows you to quickly switch between your own mix and up to nine different reference tracks, each with independent level controls and looping options. It's designed to occupy the final audio effect insert slot on your mix bus, so that your reference material does not get fed through any mix bus processing, such as compression or EQ, that is being applied to your mix-in-progress.

As Easy As AB

Conceptually, Magic AB is much like having a media player connected to a monitor controller, but with some really useful added features. Fast switching is key to the efficacy of any A/Bing method. As Mike Senior puts it, "The ear is very quick to acclimatise to changes in tone between mixes, so the quicker you can switch between your reference tracks and your mix, the more revealing the process is likely to be.” Magic AB converts the sample rate of your reference tracks to that of your project and then loads the audio into the system RAM so that playback and switching are instantaneous. The down side is that this can quite quickly use a significant amount of RAM, especially if you record at higher sample rates. However, as most DAWs have already moved to 64-bit architecture, and can therefore address an unlimited amount of RAM, this should become less of a problem over time, especially given that RAM upgrades are so affordable these days.

Uncompressed WAV and AIFF files at up to 24-bit/96kHz quality can be converted within the plug-in on Windows systems, as can MP3 files, with additional support for the AAC format on Macs. FLAC is the most common lossless audio file format, so I was surprised to find that it's not natively supported on Mac. This isn't a big issue, as there are freeware tools for converting FLAC files to WAV, but it's worth noting. With the correct codecs installed on a PC, there are no such issues.

Thanks to a big A/B toggle switch on the plug-in, flipping back and forth between the two audio streams is intuitive, and by mapping MIDI CC messages to a controller, switching can be achieved without opening the plug-in window. If fast switching isn't for you, though, it is possible to set a crossfade time between 0 and 2000 ms.

If you're mixing any modern genre of music, chances are that your reference material will be much louder than your mix, because it's been maximised and limited during mastering. Our ears often tell us that louder is better, so to make a fair comparison, you should match the level of the reference tracks to your mix. Magic AB's level-matching functionality is thus one of its main selling points.

Magic AB has two ±12dB faders, one for your material on the 'A' channel, and one for your references on the 'B' channel. There are also likely to be level differences between each of the commercial tracks loaded into the plug-in, so each track also has its own ±12dB level control. If any of your references are unmastered audio files, the extra 12dB boost will be particularly handy. The implementation has been well thought out, making the potentially laborious task of level-matching several audio files very quick.

Magic AB's timeline is independent from that of the host DAW, and instead of just running each reference track from start to finish, it lets you loop a user-defined section of each, with the help of a zoomable waveform display. Although muscle memory from my DAW zoom key-commands tripped me up a few times, dragging loop points within the plug-in interface soon became familiar. Once a loop is set, DJ software-style quarter, half, 2x and 4x buttons help to make changing the loop length painless. Magic AB always loads the entire file, even if you're only referencing a small loop, so in theory its RAM footprint can be dramatically reduced by pre-editing loops before loading them. However, this obviously is more work and prevents you from making any changes to the loop within the plug-in.

One of the few limitations in the current version is that if you want to loop, say, a chorus and a verse from the same track, you would need to open two instances of the same audio file with different loop points. Being able to define more than one looped section per track would be a welcome feature, freeing up track slots and potentially RAM as well, and this is promised for a future update.

The nine slots available for reference tracks proved quite enough for my needs, although an unlimited number of presets can be saved. Loop points and levels are all saved within presets, so saving and recalling playlists for specific tasks is very straightforward. These tasks might include generally acclimatising yourself to a new room or testing your mix against extremes, such as when sibilance is piercing or the bass is too loud. They're also really good if you want to put together genre playlists or, as part of the mastering process, adjust relative track levels so they sit together on an album.

The plug-in has built-in Peak and RMS meters as well as a crest factor meter that measures the difference between the other two values. Helpfully, both working mix and reference audio streams are metered simultaneously, so it's possible to make some judgements about dynamic processing without having to switch back and forth endlessly. For more detailed analysis, I found using Magic AB with a spectrum analyser and various other meters offered an extra layer of insight.

Although Magic AB doesn't change the sound of your mix directly, using it as a reference tool will help to improve your mixes. It's often said that there's no magic bullet for creating a great mix, but Magic AB helps to reveal any weaknesses, and that's invaluable. Considering how much easier this plug-in makes referencing, and how inexpensive it is, for me it's a no-brainer. Magic AB will be a fixture at the end of my mix bus for the foreseeable future.

Magic AB is a serious tool for checking your mixes against the competition. Although similar functionality can be achieved with workarounds, this puts all the main tools for referencing in one place, and for a surprisingly small outlay. Once you've seen how easy referencing can be, you'll be reluctant to go back.