Sample Magic are now well established in the sample library world. While they are perhaps best known for their dance‑ and house‑oriented libraries, they have also released a number of more mellow collections, and Soundtrack & Chill falls into this category. The library supports a large number of different formats; I used the WAV files for the purposes of this review, which are made up of approximately 1.5GB of material in nearly 600 24‑bit/44.1kHz audio files. The material itself is organised into folders based upon the type of sound or instrument used, rather than using a construction‑kit approach. The samples are further organised within many of the folders on the basis of the original recording tempo, into sub‑folders of 60, 70 and 80 bpm. 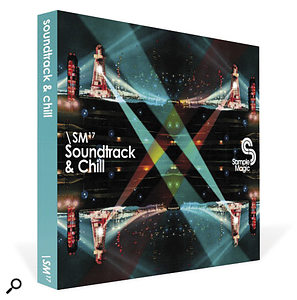 The key instrument groups are Beds, Elements, Guitar, Keys, Nature, Piano, Rhythm, Vibraphone, Vocal Hits and Effects. In the main, this type of music is built on an underlying texture of some sort, so the beds make a good place to start. There is a decent amount of raw material to work with and, although there is perhaps nothing radically new compared to other libraries within this genre, what's here is good. Usefully, most of these beds are between 20 and 40 seconds in length and provide lots of evolving textures, from soft string‑like drones to more obviously synthetic shimmering pads: a decent selection upon which to layer some of the other samples.

Of the other instruments, I particularly liked the keyboard, piano and vibraphone samples. All of these include a good range of abstract melodic material: nothing too catchy or obvious, but suitable for the 'soundtrack' role the library is targeting. The sounds themselves are soft and the pianos are further divided into 'dry' and 'effected', the latter processed with reverb and, for some samples, supported by a synth layer. I also liked the Rhythm group, which includes a wide range of percussion‑based, but suitably subtle, rhythmic loops. Some of these feature a layer of processing or synth‑based rhythmic textures. I was perhaps less inspired by the Elements, Nature and Vocal categories, all of which feel a little lightweight by comparison to the other sections. That said, the material that is supplied, while perhaps a little eclectic, is perfectly usable and well recorded.

There is a lot of this ambient, slightly abstract music used in TV, film and other media contexts, where all it has to do is create a mood and not get in the way of the visuals or voiceovers. Therefore, as with other libraries in this genre, Soundtrack & Chill is aimed more at media composers than songwriters. Although it doesn't break much in terms of new ground, at this price, it offers respectable value for money. John Walden