SE have aimed to combine the smoothness of ribbon mics with the high-end extension of a condenser. What witchcraft is this? 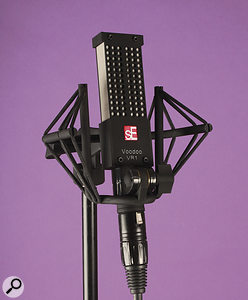 Ribbon mics tend to have something of a family sound that's related to the way in which a typical ribbon transducer rolls off high frequencies — so I was intrigued when I heard that SE had developed a ribbon capsule capable of high-frequency response beyond 18kHz. After all, if the response of a ribbon mic can now be made similar to that of a capacitor mic, wouldn't that defeat the entire reason for building a ribbon mic in the first place? Ribbons are normally chosen when the high end of the source material needs smoothing out — common examples being bowed strings and guitar amps — so adding the wrong kind of top end could negate their benefits. There's only one way to find out, of course: put these new mics to the test in the studio...

The are two versions of the Voodoo ribbons — the passive VR1 and the active VR2 — and both models claim a 20Hz‑18kHz frequency response. While SE's deluxe RNR1 ribbon model (which was designed in conjunction with Rupert Neve, and which I used as a reference mic while testing the Voodoos) uses specialist circuitry and custom transformers to achieve its extended high end, the Voodoo models use a novel mechanical diffusor method, that's an inherent part of the capsule design. This was designed by Siwei Zou, the company's CEO, who is also a respected classical musician, happens to have very good ears and knows exactly how well‑recorded instruments should sound!

The ribbon used in the Voodoo capsule itself is only two microns thick, and produces the figure‑of‑eight polar pattern you usually find in ribbon mics. While some see the rear sensitivity of a figure‑of‑eight mic as a negative point, it is easy enough to take care of this using acoustic screens if necessary, and the insensitivity to sound arriving 90 degrees off‑axis can be a very useful ally in the war against spill. It's also worth pointing out that while modern ribbon designs are mechanically more robust than most vintage models, they still need to be handled with care.

The VR2 active version is based on the same capsule design as the VR1 and, although the body is rather longer, it follows generally similar physical styling. Active circuitry can be designed to add gain, which in this case means that there's no need to use a specialist low‑noise, high‑gain mic preamplifier: the VR2 has some 14dB more output level than its passive sibling, which means it can give good results with a typical console front‑end or audio interface's mic preamp. Most of my tests were done using a Universal Audio Solo 110 preamp, but I also got perfectly good results from the VR2 using the preamps in my M‑Audio interface.

Sensitivity figures are 1.6mV/Pa for the VR1 and 10mV/Pa for the VR2. Both models can handle up to 135dB SPL, and the VR1 has a self-noise figure of 17dB while that of the VR2 is 20dB. The VR2 appears slightly noisier because it has its own preamp stage, whereas the self‑noise figure for the VR1 doesn't include any noise contribution from the preamplifier to which it will be connected — and which will need to be operated at a higher gain than if a VR2 were connected. Because of its active circuitry, the VR2 requires 48V phantom power to operate.

Physically, these mics look unlike any ribbon mics I've seen before, not least because of their small size and slab‑like shape. The ribbon and magnetic assembly fills almost the whole of the body, leaving just enough space below for the output transformer, and in the case of the VR2, the on‑board circuitry. They come in wooden cases, with profiled foam inserts to provide safe storage, and in addition to a simple plastic stand‑mount, there's also a shockmount cradle similar in styling to that provided with SE's SE4400 capacitor model. 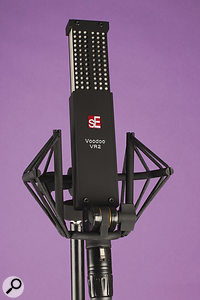 For my first test, I used the VR1 on electric guitar, purely because I was intrigued to find out if that extended top end would produce a harsh sound. With the mic 15 to 25 centimetres from the speaker, and slightly off‑axis, the overall tonality came reasonably close to how I felt the amp sounded in the room — the top end kept the right degree of bite, but there was still a sense of a ribbon mic's smoothness. This translated well with both clean and dirty guitar sounds, and though a little EQ may be needed to tame the inevitable proximity bass-boost when working up close, achieving a good electric guitar sound using this mic was no problem. Interestingly, the Neve RNR1 sounded surprisingly similar, but with a slightly more full‑sounding low end. The active VR2 sounded virtually identical to the VR1 but was, as indicated by the specifications, far more sensitive.

On spoken word, the two mics again sounded very close to the RNR1, with only the RNR1's extra low-end warmth giving it away as the pricier mic. I'd describe the vocal character as warm and smooth, but not dull, and it could really help singers with 'thin' voices. Both the Voodoos and the RNR1 responded well to EQ, and further tests with acoustic guitar and percussion again revealed results so similar that it was often difficult to tell any of them apart. While the percussion sounded pretty sweet using either mic, I felt the acoustic guitar sounded a bit woolly and needed some EQ to tidy it up. Nevertheless, the benign high-end of the ribbons kept the sound from becoming aggressive, so it may suit some styles, where a deliberately bright sound is not required.

Before packing everything away I put up my original SE R1 — the company's first ribbon model, which has a much more old‑school ribbon sound — and in all the above applications it sounded warm and punchy, but was far less well defined at the top end. Again it responded well to EQ, and could sound good on electric guitar, but it wasn't nearly as versatile as the Voodoos.

How Did The Voodoo Do?

Like the RNR1, both of the Voodoo mics have significantly more high‑end extension than a typical ribbon mic, but the sound still manages to retain its smoothness in the upper registers. I was surprised at the subjective similarities in tonal character between the three designs, given that the Voodoo models and the RNR1 achieve their extended high‑end response in very different ways. The engineers at SE are not saying too much about how their Voodoo capsule design works (there wouldn't be much voodoo about it if we knew!), other than that it includes some precision diffusion elements — but my tests here show that whatever they've done, it works.

If you like the idea of a ribbon sound but find traditional ribbon mics a touch too dull, the Voodoos might just win you over. Both mics respond well to EQ and their smooth‑but‑extended top end might see them being used in situations where you'd normally pick a capacitor model.

The only ribbon I've heard that sounds similar is the same company's rather pricier RNR1, although the Audio-Technica AT4050 capacitor model also manages to sound smooth at the high end and works particularly well if you need a mic for guitar cabs. I've not personally tried the Blue Woodpecker, though apparently that also provides extended high end and may therefore be worth auditioning.

Although closer to the original R1 in price, the Voodoo mics sound surprisingly similar to the rather more costly RNR1, and they should suit many studio applications.