Peter Siedlaczek's Advanced Orchestra was the must-have orchestral library for several years and set new standards for the genre. Giorgio Tommasini's name may also be familiar: he was part of the team behind the Stradivari and Gofriller Solo Cello instruments released by Gary Garritan. Siedlaczek and Tommasini have now joined forces to create The Trumpet, a download-only virtual instrument running on Kontakt Player 2 and Kontakt 2. 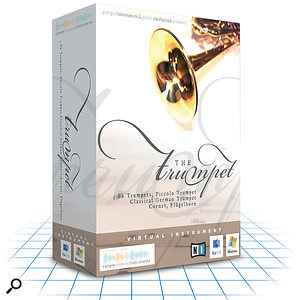 The Trumpet's relatively small 250MB sample database can't be edited, nor does it have endless lists of patch names like 'trumpet_3Layer_amb_cresc-dim4secs_KS_XFdMod_lite'. Instead, there's a single patch called 'Main Trumpet', which is incredibly versatile — but it must be said that getting the best out of it depends entirely on intelligent use of the volume pedal (which has to be mapped to generate MIDI CC#11 expression data) and the elaborate keyswitching system.

The keyswitches trigger a large array of expressive performance nuances, one of the nicest of which is a lilting vibrato added to note endings. Other articulations include sforzato attacks (great for sharp, punchy staccato stabs), small upward pitch-bends, short falls, a very pleasant 1930s-style 'wah' mute effect, slight fade-ins and subtle decrescendos. You can create bigger, more dramatic swells and diminuendos with the expression pedal; thanks to Tommasini's proprietary 'harmonic alignment' system, transitions through the different dynamic layers sound creamily smooth, with no phasing issues.

An auxiliary set of keyswitches accesses longer falls and various subtly differentiated types of 'split portamento' slides. Pushing up the mod wheel imparts a very life-like vibrato that turns into a big-band style 'shake' as you increase the amount of modulation (the vibrato/shake speed can be altered on the front panel). The trumpet's excellent legatos (another keyswitchable option) sound amazingly fluid. Quietly-played legato notes sound with a pronounced slide between pitches, and the slide can be disabled with a keyswitch.

Sonically, the trumpet is pure, fat and bright, and the close-miked samples benefit from a little reverb, which you can add inside the Kontakt Player. Various types of mute (Harmon, cup, bucket and so on) are a welcome addition, as are the extra instruments: cornet, piccolo trumpet, flugelhorn and three alternative trumpets, all very playable and natural-sounding. This wealth of timbral and performance options enables all the instruments to sound convincing in any musical style. As in real life, the sound is monophonic; the complex modelling and scripting going on under the bonnet would simply not work on polyphonic events. But you can, of course, use multiple instances.

The Trumpet is no entry-level product, and its sophisticated performance options will probably go over the head of virtual instrument novices. But for those with some musical and programming experience, this top-notch, stunningly realistic solo instrument offers expression and realism in spades. Dave Stewart