Need more PC power? Then meet the latest offering from Scan — and the fastest PC reviewed in SOS to date. 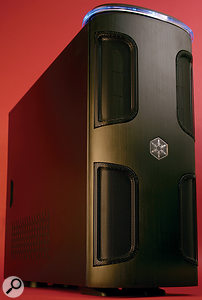 The rate at which PC technology keeps changing is nothing short of astonishing. Just two months since I reviewed an audio PC in SOS featuring Intel's relatively new P45 chip set, here's one from Scan which not only features an even newer chip set, but also a completely new Intel CPU with eight virtual cores. Since, as I write this review, these components have been available to the public for just a few days, Scan are also to be congratulated on being way ahead of the game.

The components in question are Intel's X58 chip set, and the associated CPU is Intel's Core i7, previously codenamed Nehalem. Core i7 sees the return of hyperthreading, so the quad‑core CPU in this review system appears to the operating system as eight virtual cores. However, the most significant change over previous Intel offerings is that the i7 abandons the Front Side Bus in favour of a new Quick Path interconnect between CPU and motherboard chip set. This uses a 20‑bit wide, 25.6GB per second link, providing double the bandwidth of Intel's X48 chip set and a 1600MHz FSB.

Finally, the memory controller is no longer part of the motherboard chip set, but now lives on the CPU itself. The RAM is directly connected to it, and is in tri‑channel DDR3 format, so should be installed in sets of three sticks rather than the two of the previous dual‑channel variety. Now let's find out how much this cutting-edge technology actually benefits the musician.

The PC's Silverstone Kublai KL03 mid‑sized tower case is striking, both for the rounded profile of its hinged aluminium front door, and the handy, yet elegant, siting of the top‑mounted pod, which houses the on/off and reset buttons, along with one Firewire and two USB 2.0 sockets for your dongles or external audio interface. There's also another Firewire port and a further eight USB 2.0 ports on the rear panel.

The case also incorporates Scan's 'Silent Option', which means that the hard drives are all housed in Scythe 'Quiet Drive' acoustic sleeves, and the graphics card (a 512MB Palit 9500GT PCI‑E 2.0 model) is passively cooled, using a large heat sink rather than a noisy cooling fan. All empty drive bays are filled with AcoustiPack Acoustic Foam Blocks, and the case itself is lined with an AcoustiPack Ultimate Multi‑Layered barrier mat, to both deaden its panels and reduce airborne and structure‑borne noise.

The Intel DX58SO motherboard incorporates lots of passive heat sinks, but only offers a single PCI slot — which, on this system, was used for an RME HDSP9652 soundcard. Unfortunately this motherboard also dispenses with various other connectors, including PS/2 and IDE, which might cause issues for those with older peripherals. However, there are five PCIe slots — two PCIe x16s, one PCIe x4, and two PCIe x1s.

The graphics card was fitted in one of the two x16 slots, but since the board supports two, you could attach up to four monitor screens if required. Unfortunately, the graphic card's heat sink also obscured one of the two PCIe x1 slots, although this still leaves one each of the PCIe x1, x4, and x16 slots available. Thankfully you can use x1 cards in x4 and x16 slots if you need to, and x4s in x16s, so the expansion possibilities are greater than they might at first appear, and there's space for multiple DSP cards such as the UAD2, if you need them.

The tri‑channel DDR3 format RAM means that most X58 motherboards feature either three or six memory slots, but unusually the DX58SO offers four, and using the fourth removes the triple‑channel benefits — it's for those who want to install up to 8GB of dual‑channel RAM. So the two main memory alternatives are three matched 1GB sticks (as installed in this system) or three matched 2GB sticks. The latter option is for the benefit of anyone who's running a 64‑bit operating system that can access the extra RAM. I'd advise anyone who is considering this system and anticipates ever needing 6GB to buy it with three 2GB sticks from the outset, to avoid throwing away the 1GB ones later on.

Scan had very sensibly installed three hard drives: a 250GB one for System, and two 500GB models for Project and Sample duties respectively. This is a far more sensible approach for most musicians than combining the second and third drives into a RAID setup. As with many modern systems, there's no floppy drive, but the Akasa multi‑format card reader is a welcome alternative for mobile data transfers.

Cooling of the Intel Core i7 920 2.66GHz CPU is courtesy of a low‑noise 120mm Sharkoon fan and a Thermalright True Copper heatsink, which is not only massive but, at 1.8kg, not far short in weight of a typical bag of sugar. There are also three slow‑spinning 120mm fans: one on the front panel to pull cool air in over the three hard drives, one at the rear to expel warm air from the case, and another for the 600W Zalman PSU.

One thing that did surprise me was how heavy this PC was, overall: on my bathroom scales it weighed 25kg, or nearly four stone! No doubt this is due to the combined contributions of the CPU heat sink and the multi‑layered acoustic lining, but it shouldn't result in any problems unless, for some reason, you need to move your PC around on a regular basis. I wouldn't recommend it for gigging! 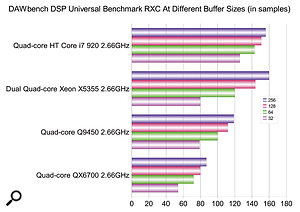 This DAWbench DSP Universal benchmark, which tests the number of Reaper Reaxcomp, or RXC, compressor plug‑ins managed by PCs with different CPUs, displays how strongly the Scan Core i7 2.66GHz compares with 2.66GHz processors from various other Intel families. Results for other CPUs courtesy of Vin Curigliano, creator of DAWbench.

After all this attention to drive and case silencing, I'm pleased to report that, considering the power under its bonnet, the Scan Power DAW PC was relatively quiet, although slightly let down by the noise of the front‑mounted case fan; most tower cases end up underneath a desk, so rear fan noise is less important. When idling, the CPU cores all ran at a low and very healthy 37 degrees Centigrade, with a system power consumption of around 130W, and only rose to a safe 63 degrees Centigrade during my torture tests, with an increase in power consumption to a modest 220W but, fortunately, no increase in ambient noise. Perhaps Scan should consider temperature‑controlled fans, which would reduce the idling noise levels considerably.

The onboard audio had been disabled in the BIOS, and all the usual Windows XP tweaks had been meticulously applied, although, interestingly, the page file had been disabled on the Windows C: drive and one of 2.5GB had been created on both the D: (project) and E: (samples) drives. Scan had even stripped the Vista graphics back to Classic look to squeeze the last drop of performance out of the system.

Sisoftware's Sandra measured by far the highest results of any PC reviewed in SOS to date, with Memory Bandwidth of a massive 16.5GB/second (a typical quad‑core machine will measure somewhere between 5GB and 6GB/second), CPU Arithmetic of 69 GIPS (Dhrystone) and 62 GFLOPS (Whetstone), and CPU Multimedia of 126 MPixels/s (Integer) and 98 MPixels/s (Float). This final figure exceeds that of the Intel Core 2 Quad Q9650 CPU reviewed in the December 2008 issue of SOS by nearly 40 percent, yet the Core i7 920 is considerably cheaper. Progress indeed!

As I've said before, though, the most appropriate test for any music PC is one that contains a representative combination of audio tracks, plug‑ins and VST Instruments, so once again I turned to DAWbench (www.dawbench.com/benchmarks.htm) for their Blofelds DSP40 test, only to find that once I'd racked up the same 200 Magneto plug‑ins that maxed out the quad‑core Q9650 3GHz machine mentioned above, the Cubase VST Performance meter was still barely up to 50 percent.

Tougher measures were called for, so I loaded up the DAWbench Universal DSP benchmark test and managed 151 Reaxcomp (RXC) plug‑ins at a buffer size of 128 samples (3ms latency at 44.1kHz). This result means that the Scan PC exceeds the performance of a dual quad‑core X5355 PC with identical clock speed (see the graph below), which is stunning performance for a single-CPU machine!

Intel's Core i7 moves the goalposts so far that I consider it the most exciting CPU to be released for years. This Scan 3XS PC offers us audio performance that previously would have required two similarly clocked Xeon processors and an expensive dual‑processor motherboard to match, and yet beats them by a significant margin at lower latencies.

In the past, some mainstream PC suppliers have misunderstood the special requirements of the musician with regard to low acoustic noise, modest graphics cards, and essential Windows tweaks. However, Scan's 3XS audio, video and gaming arm prove here that they can offer just as much expertise as the specialist DAW builders, with the advantage of buying components in such bulk that they can keep system prices competitive. The Scan Power DAW PC offers a huge amount of processing power, yet Scan have managed to keep the price down to an incredible £1532. If you're in the market for a more powerful PC, you should put it on your shortlist immediately.

While various DAW builders already have eight‑core systems based around Dual Quad Xeon processors, for those who have demanding requirements (huge track and effect counts), yet still want to run at low latency, very few have yet launched i7‑based systems as I complete this review.

One company that has is US‑based ADK Pro Audio (www.adkproaudio.com), whose Core Xtreme series is priced similarly to their Xeon Xtreme range. Both ranges offer storage of up to 6TB, but while the i7 currently offers a maximum of 12GB DDR3 RAM, the Xeon machines support up to 32GB of DDR2 RAM, which may sway some.

Tech support also seems very good, as far as I can tell without having had to use it. Scan offer a dedicated telephone line where a support engineer will guide you through various technical solutions. If a hardware fault is suspected, an engineer can be sent out to examine your system and, hopefully, resolve the problem. If this doesn't prove possible, the system will be returned to base for further examination. Once the fault has been rectified and the system fully checked, it will then be returned to the customer.

Scan's Core i7‑powered audio PC provides stunning performance for the price. Other specialist DAW builders have some stiff competition on their hands!