Scan's new laptop is as powerful as many desktop computers and aims to eliminate the unreliability so often characteristic of off‑the‑peg machines. 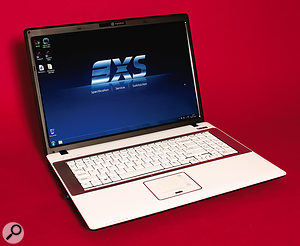 It's always been tricky to find a laptop computer that can be guaranteed to work well with a wide variety of audio interfaces, but since Core i5/i7‑based machines have appeared it's become a nightmare. Compatibility with Firewire audio interfaces hit an all‑time low when Texas Instrument Firewire controller chips were abandoned on modern laptop motherboards, while arcana such as CPU throttling schemes, graphic drivers and limited BIOS options for the power‑saving 'C‑states' have all resulted in music forums awash with reports of unresolvable audio drop-outs, glitching, intermittent connections and the like — even with USB interfaces.

I know several professional DAW builders who have spent weeks researching and abandoning one laptop model after another in their quest to find one offering reliable, low‑latency audio. So kudos to Scan 3XS for not attempting to reinvent the wheel. Instead, they have based the spec of their new range around a couple of well‑researched and tested solutions already available in the US from ADK Pro Audio (www.adkproaudio.com). Skilfully advertised on the ADK Pro Audio web site as able to run Synthogy's Ivory grand piano software with a 64‑sample buffer size (that's about 1.5ms latency at a 44.1kHz sample rate, and the holy grail of computer audio), this looks like a shrewd move from Scan 3XS, so let's see how this machine shapes up.

The Scan Performance laptops are available in 15‑inch and 17‑inch models, the machine under review here being the larger of the two. Clevo are extremely well known notebook manufacturers whose bare-bones models are widely used by other equipment manufacturers), and this ADK‑sourced machine is based around the Clevo M77CU notebook chassis. From the moment I opened the box, I was impressed with this laptop, whose slimline and relatively lightweight casing comes in high-gloss black with contrasting ivory interior and keyboard. This is a classy‑looking machine!

It incorporates a 17‑inch, 1440 x 900-pixel screen, and I was also pleased to see a full keyboard including numeric keypad, and a touch pad with multi‑gesture and scrolling functions, both of which make using a laptop considerably easier if you're used to a desktop machine.

The review model featured an Intel Core i7 M620 dual‑core processor with Hyperthreading, running at 2.66GHz, giving a total of four virtual cores, which seems a good compromise between power and noise/heat generation. Two 2GB sticks of DDR3 RAM had been fitted for a total of 4GB of system RAM, although you can specify 2GB or 8GB instead, as your requirements dictate.

A wide range of hard drive options are available, but the 500GB model in the review machine was from the Seagate Momentus range, specially chosen because it offers the largest capacity available in a notebook drive, is rugged enough to withstand the odd knock, and also offers 7200rpm performance, while requiring only marginally more power than the average 5400rpm laptop drive.

Ironically, the most critical component for this laptop is probably the Lycom Express Card with one IEEE1394a port and two USB 2 ports, furnished with a Texas Instruments chip set. You might think that you could plug this adaptor into any old laptop and gain the legendary TI compatibility with Firewire audio interfaces, but it doesn't work that way, very few laptops seeming capable of maintaining a consistently good low‑latency connection for long periods. Part of the secret of this Clevo chassis is that it's been specially customised, from a tweaked BIOS to special drivers, so you won't get the same audio performance if you buy it elsewhere.

Nor can ADK rest on their laurels, since other equipment manufacturers often change internal components without warning, requiring yet more tweaks for audio. That's why this Scan model currently features a tiny USB Wi‑Fi adaptor from Edimax to replace the internal Intel Wi‑Fi device (which worked perfectly in the past, but whose latest revision causes DPC latency problems during audio streaming at low latency). Scan are already talking to Intel to see if they can track down a more convenient internal Wi‑Fi solution.

Overall, with this Express Card adaptor in place, the laptop offers a useful complement of two Firewire and four USB 2 ports, although this total quickly reduces if, as I did, you plug in the Wi‑Fi adaptor, a Cubase dongle, a Firewire audio interface and an external mouse.

Installed on this review model was Windows 7 64‑bit Enterprise N, a slightly enhanced version of Professional but without Media Player. Various versions of Windows 7 are available for this range, but Windows XP isn't an option, due to the customised drivers. 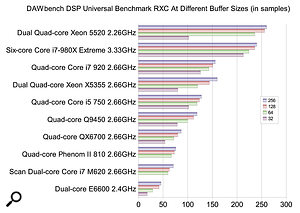 With performance close to that of a quad‑core AMD Phenom II desktop machine, this dual‑core Scan 3XS laptop PC punches well above its weight.

Acoustic noise was suitably low when idling, with just a gentle whir disturbing the silence. It will never drop quite as low as a desktop machine with added acoustic treatment, but no‑one should expect that. Idling temperature was a reasonable 62 degrees Centigrade, but once I kicked in with my torture tests the cooling fans sped up in two stages, forcing the temperature down to a very safe 40 degrees Centigrade, while still remaining relatively quiet.

A high idling temperature is unusual for a desktop machine, but for a laptop it ensures minimum fan noise when you most need it — in the silence before you start playing back audio. However, the most important aspect for musicians is that audio playback carried on regardless during the fan-speed changes, where lesser machines stutter and glitch.

In terms of standard benchmark performance, this machine comes in somewhere close to the Rain Phenom II quad‑core desktop machine that I reviewed in SOS October 2009, measuring a memory bandwidth of about 9.5GB/s, CPU Arithmetic results of 38 GIPS Dhrystone and 26 GFLOPS Whetstone, although its CPU Multimedia scores were somewhat lower, at 71 Mpixels/s Integer and 54 MPixel/s Float. However, I considered this very good going for a dual‑core competing with a quad‑core model of the same clock speed.

Since it's now become such a standard utility for gauging audio performance, I also used the DPC Latency utility while running my Cubase 5 tests. Even during these periods of maximum stress, the laptop displayed an excellently low average value of around 100 microseconds, with an occasional blip to a maximum of 270 microseconds, almost guaranteeing good audio performance down to small audio interface buffer sizes. The Seagate Momentus hard drive also managed an average 91MB/sec sustained transfer rate (quite enough for many dozens of 24‑bit/96kHz audio tracks).

On this side of the laptop, we find the power-supply input, D‑sub and HDMI outputs for a second monitor, an RJ45 port and two USB 2 ports, one of which is occupied by an Edimax Wi‑Fi adaptor. Other connections are found on the back and at the other end of the laptop.However, for me the ultimate challenge for any audio PC remains the DAWbench test, so I fired this up on Cubase to compare the performance with all the other review PCs I've had in recently. Low‑latency audio performance may also vary from audio interface to interface, so I was pleased to have an M‑Audio Profire 610 interface to test with this machine, as this is getting a very good reputation for low-latency performance, coming close to some highly regarded RME models! I still find it frustrating that M‑Audio drivers require you to shut down your audio application before you can change the buffer's size, but the actual results were very good.

With a conservative 256‑sample buffer size, I managed to run 71 ReaFX Reaxcomp plug‑ins before I heard any glitching, but more importantly for those who demand good low‑latency performance I managed to run 63 with a 128‑sample buffer size and 60 at 64 samples (the lowest available option for the Profire 610 drivers). This small drop-off in low‑latency performance once again proves that Intel's Core i3/5/7 series is one of the best choices available for the musician.

These results do look low on my overall chart, but once you remember that this is a dual‑core CPU, a slightly different picture emerges: this laptop can hold its own against a quad‑core Phenom II running at the same clock speed, and moreover can do so with Windows 7 and Aero graphics, as opposed to Windows XP in Classic Mode!

Scan have implemented all the most important Windows 7 tweaks, but left Aero and its various animated graphic fripperies intact. I did try disabling the Aero interface altogether and reverting to the hair-shirt 'Windows Classic' appearance, but didn't manage to run any more plug‑ins, so I think they've made a sensible choice.

While some musicians may get away with 'off the shelf' laptops, it's a very expensive minefield, since many models ultimately prove useless for running low-latency audio. Even when professional DAW builders have tracked down a suitable candidate, the chances are that they'll have to come to an arrangement with its manufacturer to give it various low‑level tweaks before it can finally be declared 'fit for audio duty', so it's far safer to rely on this professional expertise.

This review model comes in keenly priced at £1230, which should provide some fierce competition for other DAW builders, and seems excellent value for money considering the amount of power and sophistication on offer. The three 'S's of Scan 3XS stand for Specification, Service and Satisfaction, and judging by this latest model, they have once again achieved this goal. If you want to restrict snap, crackle and pop to your breakfast cereal, the Scan Performance Laptops look like a very safe bet!

As always, this review is a snapshot of the entire range, and Scan have various other laptop alternatives with Core i5 or i7 processors available for those with bigger or smaller pockets. Many other DAW builders also have laptop options, although some seem to have dropped them from their ranges altogether, presumably because of all the current audio hassles.

Each system is built to order, and customers can monitor their machine's current status online, with reports covering build, software, 24‑hour burn‑in, quality control and system completion. You get a standard two‑year warranty, with the first year On‑site (mainland UK only) and the second Return To Base, plus options to extend the latter by a further one or two years. The in‑house Tech Support team are available via email, telephone or in person, and Acronis True Image Home 2010 backup and restore software is also included to help you maintain your machine in tip‑top condition.

With guaranteed glitch‑free, low‑latency audio, a large 17‑inch display and keen pricing, this Scan laptop could be the dream machine for the roving musician and gigging performer.

Marvel's Guardians Of The Galaxy
2 weeks 3 hours ago.