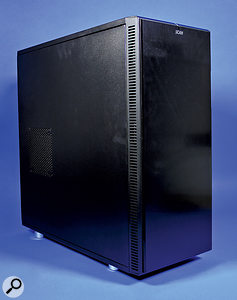 Scan seem to have carved out a fairly unique niche in the PC marketplace, not only offering a comprehensive range of digital audio workstations, gaming PCs, video editing and CAD workstations and media entertainment systems (all of which come under the 'Scan 3XS' moniker), but also stocking a huge range of components that they sell to other specialist professional and home PC builders alike. Their audio specialists therefore have an enviable choice of components with which to check compatibility, as well as excellent access to the parts manufacturers themselves.

This particular review model is based around Intel's i7 3930K Sandy Bridge CPU, whose six physical cores and six virtual ones offer a huge amount of processing power for the musician, especially since this one has been carefully overclocked beyond its stock speed of 3.2GHz to a massive 4.4GHz. The chosen Asus motherboard is also unusual for a single CPU model in offering two banks of quad-channel RAM slots, enabling those with huge memory requirements (such as Vienna Symphonic Library users aiming to create full orchestral scores) to install up to 64GB, although the review model was fitted with a more modest 16GB.

I've heard a lot of praise aimed at the Swedish-designed Fractal Design Refine cases, and I can now see why. Most builders opt for the smaller R3 model, but given the power and cooling requirements of this 12-core monster, Scan chose the rather more imposing XL version, here in Black Pearl but also available in Titanium Grey as an option. This case is built like a tank from heavy steel, coupled with a lining of dense sound-deadening materials for its main panel surfaces, while the hinged front door is also acoustically lined and closed via a magnetic catch, with an elegant blue illuminated on/off switch at top front, along with two handy USB 2 and two USB 3 ports.

Case cooling is taken care of by of two low-noise 140mm fans (one mounted on the case front panel and one on the rear) and one massive 180mm fan at upper back, at a close to horizontal angle. Remember, the larger the fan, the slower it needs to turn and the lower its noise contribution. The 625-watt Enermax power supply also houses its own 120mm cooling fan with integral speed control for low noise. Overall, this case should last a lifetime, although I wouldn't fancy moving it after initial installation, as it has an impressive size and weight. 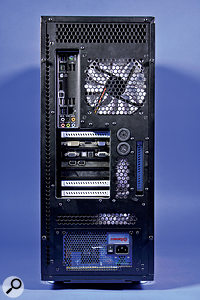 There's a wealth of rear-panel connections, which are augmented by two USB 2 and two USB 3 ports mounted on the top of the case. Inside, I found possibly the neatest wiring I've ever seen, with all cables beautifully grouped into several looms. There was also plenty of expansion room for those who need it, with seven empty hard drive bays and a further three 5.25-inch drive bays still available on the front panel beneath the supplied Samsung 22x DVD-RW Writer. Four of the eight RAM sockets were filled by the 16GB of high-quality Corsair RAM, and I was also pleased to see that, despite the huge Thermalright Archon air cooler mounted on the CPU with its associated low-speed 140mm fan, all four empty RAM sockets were still easily accessible for those who want to add more later on.

The Asus V-Pro P9X79 motherboard features Intel's X79 chip set, and has been available for about six months (new enough to have plenty of the latest features, but established enough for any issues to have been ironed out). Compared with the previous Z68 chip set, the X79 supports the newer LGA2011 Sandy Bridge CPUs and quad-channel rather than dual-channel memory architecture, which should help to boost performance for heavy users of samples. This motherboard also boasts its own SSD Caching, USB 3 Boost for even faster external data transfers, and a unique BIOS Flashback update that lets you update your motherboard using a USB flash drive and a single rear-panel button press.

It does, however, lack PCI slots, so anyone with a good but elderly soundcard should perhaps look for an alternative board or interface. However, for those who have already moved on, there are a healthy six PCIe slots on offer, and this system would normally arrive with three still available. The other three were already in use on the review model for the NVIDIA 512MB GeForce G210 fanless graphics card, and two more expansion cards providing twin Firewire and twin USB 3 ports (to supplement those already on the motherboard) respectively. Overall, there are plenty of ports available: I counted a total of eight USB2 and four USB3 ports across the top and rear panels, as well as the two Firewire ports on the expansion card.

On the drive side, the case houses two of the ever-popular Western Digital Caviar Black drives of 1TB capacity each, along with a single Corsair Force 3 series 240GB Solid State Drive that, with the motherboard's SATA 3 6Gb/s interface, allows read/write rates of up to 550MB/s and incorporates the well‑respected SandForce controller, which uses a proprietary compression system to minimise the amount of data actually written, which in turn increases its speed and lifetime. In other words, it should speed up your boot time and Windows performance without compromising long-term reliability. Finally, talking of Windows, this machine had Windows 7 Pro 64-bit installed to take advantage of all that RAM. 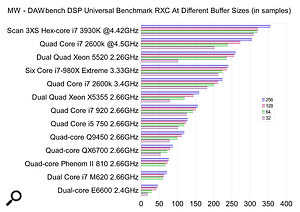 This overclocked 3930K processor turns in an excellent performance, outperforming a similarly overclocked 2600k Sandy Bridge processor by around 18 percent, and with a huge 34GB/second memory bandwidth for those who run vast sample-based orchestras.

As always, switch-on time is the moment of truth for any audio PC, and this one didn't disappoint. Noise levels at the front were extremely low, and what noise remained was mostly at top back where the main case fan exhausts. When the case is mounted in a typical 'under the desk' scenario, it should be very quiet indeed. Thanks to the Corsair 240GB Solid State Drive, it only took about 12 seconds from the 'Starting Windows' message to reach the desktop. As expected, the drive turned in a jaw‑dropping performance, with an average transfer rate of 393 MB/second. When compared with the 254 MB/second of the same SSD in Inta Audio's i7 Ultimate Audio PC, reviewed in SOS March 2012, this rather proves the effectiveness of the Asus SSD caching on this motherboard.

Idling temperature was a comfortable 41 degrees Celsius, and none of the six cores rose beyond a somewhat high but quite safe 72 degrees during my torture tests, accompanied by a slight increase in acoustic noise that fell within a few seconds of this 100 percent load being removed. On the software side, Windows 7 Pro only needs a few tweaks for optimum audio performance: Scan have set up a custom power setting profile, disabled Windows sound mapping and allowed Windows Update to check for new updates, which the user decides whether to download.

The Sisoftware Memory Bandwidth test measured 34GB/second, a huge increase over any system I've reviewed to date, even compared with the 21GB/second of the overclocked Sandy Bridge quad-core 2600K system I reviewed in June 2011, proving the effectiveness of the X79 quad-channel RAM architecture. Meanwhile, the CPU Arithmetic score was 176GIPS Dhrystone (an increase of around 30 percent over the aforementioned 2600K), the Integer CPU Multimedia was 388Mpixel/s (50 percent higher than the 2600K), and the CPU Multimedia Float performance was an excellent 545Mpixel/s (almost 80 percent higher than the 2600K), all auguring very well for the audio performance tests.

Once I'd fired up the trusty DAWbench test inside Cubase, I soon found that it wasn't torturous enough. Using a conservative 256-sample buffer setting with the supplied RME HDSPe AIO audio interface, I didn't get any glitching, even when running the maximum 320 instances of the Reaxcomp multiband compressor plug-ins! I am therefore indebted to Vin Curigliano (the creator of DAWbench) for supplying an extended version of his utility capable of even more punishing plug-in counts, which finally enabled me to run a massive 356 plug-ins at the 256 buffer setting, 322 with a 128 buffer size, 320 with a 64 size and 310 with a 32 size. This pushes the Scan 3930K to the top of my chart with a 17-18 percent lead over a similarly overclocked 2600K quad‑core model. To put it another way, a 2600K would need to run at a totally unachievable 5.3GHz to match it.

Some musicians may still be waiting for the incremental improvements of the new quad-core Intel Ivy Bridge CPUs, but although I've yet to personally test any of the newer versions of these, mainstream benchmarks suggest results reasonably close to Sandy Bridge models at similar clock speeds. More importantly, no hex-core Ivy Bridge options are so far available, so Ivy Bridge simply isn't an option if you need the level of performance achieved by this Scan 3930K hex-core review machine. It obviously won't be the best choice if you're on a strict budget, and, as always, this is just one snapshot from the Scan 3XS range, which offers plenty of tailored options.

The bottom line is this: the six cores of the Scan 3XS Intel SAX6 PowerDAW PC offer a lot more processing grunt than a quad-core 2600K-based machine and up to 64GB of RAM for sampling duties, yet remains significantly cheaper than a dual-CPU Xeon-based system. If that's a compromise, it sounds like a good one to me!

If you want more processing power than the musician's favourite 2600K can provide, various specialist builders have systems that might suit. For instance Inta Audio (www.inta-audio.com) offer their Ultimate Music PC with a similar spec to this review system, as do Rain Recording (www.raincomputers.co.uk) with their Element Pro X79, and Music PC (www.music-pc.com) with their Vortex Ultimate range. If you need even more processing grunt, Direct Resolution (www.directresolutions.co.uk) have more powerful dual Xeon quad-cores in their DARC Ultimate range, while Scan themselves have the 3XS Xeon 55 PowerDAW range.

Each Scan 3XS system is built in-house to order, with a 24-hour burn-in period and various quality-control checks. A hidden partition holding a complete system image is also created, so you can return to the factory default if you need to. The standard warranty lasts 12 months, and there are options to extend this to two or three years. Technical support is handled in-house by a dedicated team available on the telephone and online.

If you need more processing power than you can get from a quad-core machine, plus the option of installing a huge amount of RAM for streaming massive numbers of sampled voices, this Scan 3XS Intel SA-X6 PowerDAW PC should most definitely be on your shortlist.