You wait 70 years for a Novachord, then two come along at once... Hot on the heels of Hollow Sun's release (reviewed in July 2010's SOS), Soniccouture have issued their own sample library of this intriguing machine. Built by the Hammond company in the late 1930s, the Novachord is arguably the world's first polyphonic synthesizer, a hulking, six‑octave beast powered by 72 VCAs and 146 valves, or 'toobs' as our American cousins call them. 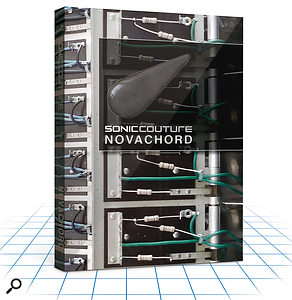 Phil Cirocco of Discrete Synthesizers spent over a year restoring the instrument (check out his web site at www.discretesynthesizers.com for some of the most inspiring 'before' and 'after' shots you'll see outside of Gok Wan's Fashion Fix). This painstaking labour of love restored the Novachord to 100 percent functionality, leaving it as authentically playable and precisely calibrated as it was when it first left the factory at the start of World War Two.

Upholding Soniccouture's 'record everything or die trying' philosophy, all 72 notes were sampled in 24‑bit quality at 50 different settings, resulting in 3600 samples requiring 3.5GB of disk space. As a starting point, 38 dual‑layer patches feature various unadulterated permutations of the Novachord's six powerful filters, with a choice of vibrato, attack and decay settings. This provides a large array of characterful, vintage organ‑like timbres, ranging from fat Lowrey and reedy Farfisa‑like tones to a passable imitation of a Clavioline (the buzzy instrument heard on Joe Meek's 'Telstar').

Soniccouture also created a large number of more complex Kontakt instruments in which the six individual filter tones may be freely mixed and matched. Each tone can have its own vibrato, envelope and filter settings, while an alternative, more deeply programmable synth screen introduces modern‑day features such as resonance, filter envelope and filter LFO.

The net result is a unique, highly varied collection of mysterious and atmospheric instruments, including some beautiful pad sounds: spooky electronic flutes, string patches with a sweet, singing high register and a weirdly romantic pre‑war flavour, and dark, throbbing theatre‑organ‑like warblings that evoke the eeriness of early horror films. In contrast to these moody sustains are bright, percussive, metallic patches that you can use for stabs and sequenced rhythm parts.

The surprisingly hi‑fi sonic capabilities of the instrument have been extended by smart programming and a terrific effects section (which includes convolution reverb) to create Theremin‑esque portamento glides, 1970s analogue synth‑style filter and phaser sweeps, muted brass straight out of the 1930s, thunderous basses and one or two screaming leads of alarming ferocity.

Preset‑surfers and hardened tweakers alike will find plenty of material to enjoy in this library, the only caveat being that some patches gobble up polyphony, so those using slower systems may occasionally need to reduce Kontakt's maximum voice number to avoid glitches. Dave Stewart