Sontronics mics usually sound as distinctive as they look — and this one looks more distinctive than most! 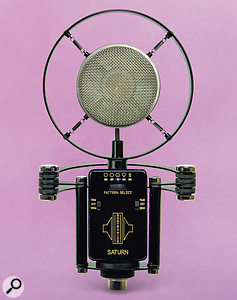 Launched at the 2010 Winter NAMM show, the visually distinctive Saturn microphone maintains Sontronics' reputation for avoiding anything that looks too close to the norm: the retro‑style design is something of a Sontronics hallmark, and in this case it is inspired by 1940s and 50s microphones.

On paper, the Saturn is presented as a multi‑purpose, multi‑pattern capacitor mic featuring solid‑state, transformerless electronics and a rugged, shock‑isolated stand mount. It was apparently conceived primarily as a vocal mic, though the manufacturers also recommend it for use with guitars, brass, woodwind, strings, piano and drum overheads. It faces some stiff competition at this price point — but Sontronics' mics are usually as audibly distinctive as they are visually.

The pancake‑shaped basket houses the dual-diaphragm capsule (which looks to be of the 1.08-inch-diameter type), which is suspended inside a wide metal hoop via four small springs, and it is this annular shape that clearly inspired the name. All the circuitry is housed in the black‑painted brass box 'body' and mounted on a neat glass‑fibre circuit board, partially populated by surface‑mount components. A captive locking ring on the shockmount cradle engages with the threaded housing of the output XLR, so the mic remains secure even if used inverted.

A thumbwheel switch is used to select between the mic's five available polar patterns: omnidirectional, wide cardioid, cardioid, hypercardioid and figure‑of‑eight. A row of five blue LEDs above the switch indicate which pattern is currently active. For use with high-SPL sound sources, there's a choice of ‑10 and ‑20dB pad settings via a three‑way slide switch, and the high‑pass filter uses a similar switch to select between flat, 75Hz and 125Hz. The mic is shipped in a soft‑lined, sturdy aluminium camera case, along with its shockmount cradle, and is covered by a lifetime warranty.

The paper spec tells us that the mic has a frequency response of 20Hz to 20kHz, with a presence hump at around 8kHz. The sensitivity is a typical 20mV/Pa at 1kHz, and the equivalent input noise or EIN is 14dB (A‑weighted). Again, this is typical, and while it isn't what I'd call impressively low for a solid‑state mic, it is certainly quiet enough for all typical studio applications. A maximum SPL of 130dB is specified. This is a realistic value for a capacitor mic without a pad switch, and means that the mic should be able to cope with anything up to 150dB with the 20dB pad switched in. As with most condensers, standard 48V phantom power is required for operation.

All my comparative tests were done using the cardioid mode of the mic, though individual tests were also carried out for the other patterns. As usual, I selected a reference mic with which I could compare and contrast the results from the Saturn, and this time I chose a Microtech Geffel UM70: this has a similar sized dual‑diaphragm capsule and a predictably Neumann‑esque sonic character. On all the sound sources in the test, which included voices, acoustic guitar, electric guitar and percussion, the Saturn came over as having a valve‑like, low-end warmth combined with a very slightly unfocused but still quite airy high end that produced a very comfortable result — though it was perhaps not quite as transparent to transients as more clinically accurate microphones.

The sound also responded well to EQ — and using Logic's Match EQ 'fingerprint' equaliser, I managed to get the Saturn to sound almost identical to the UM70. Surprisingly, the low end wasn't much different between the two mics, but the equaliser had to create a lot of complex bumps and dips at the high end, suggesting that this is where the main differences reside. I wouldn't normally use a fingerprint equaliser for this purpose, but it has proven to be a useful tool for examining the less obvious differences between mics.

On spoken word, the Saturn produced a natural sound, in which its airy high end was augmented by a warmer lower‑mid range, though I found that working close to the mic does bring up the low end to the point where some low cut may be necessary, so expect the same when using it to record vocals in cardioid or figure‑of‑eight mode. Having two low‑cut settings is very useful in this respect. For acoustic guitar there is, again, a good balance of body and zingy strings, but where you want a bright acoustic guitar to cut through a pop or rock track, there may be more suitable mic choices. The mic fared well on percussion, producing adequate definition with a nice sense of body and weight to the sound, again with lots of room for manoeuvre using EQ.

As with many capacitor mics, electric guitar sat a little less comfortably (with both the Saturn and the UM70, in fact), but here I felt that the Saturn's warmer tonality gave it the edge — and if you're prepared to work at optimising the mic position it should be possible to get perfectly acceptable results. Without EQ, the amp sound comes across as slightly grainy, but otherwise well‑balanced.

Using the other polar patterns on the same sources reveals subtle tonal differences, but most evident is the reduction in proximity effect in the wide cardioid mode, and the lack of it in the omni position. These changes, plus the extra room sound allowed into the mic on wider pattern settings, tend to overshadow any fundamental frequency‑response differences between patterns.

Out Of This World?

The Saturn is a versatile mic with a warm, yet airy character that's reminiscent of some valve microphones I've used. Its top end doesn't seem best suited to snappy transients, possibly due to subtle undulations in the frequency response at the high end of the audio spectrum, but while this might be considered a flaw in some applications, it helps it deliver a kinder, smoother sound in others. Variable patterns add to the Saturn's usefulness, and you can't help but love its quirky, vintage charm — though at this price point it faces an immense amount of competition. If you're looking for a mic to use with a particular vocalist, you must try before you buy, as we've learned that the spec tells you very little about how a given mic and singer will pair up, but in a working studio the Saturn would certainly make a useful addition to a mic locker that already includes some less full‑sounding large-diaphragm mics.

Within the Saturn's price range, check out the more conventionally styled sE Z5600A, MXL 2010 and AKG 4000B. For a multi‑pattern mic that suits a tight budget, also take a look at the inexpensive Audio Technica AT 2050.

We've placed a number of audio files on the SOS web site at /sos/articles/oct10/sontronics‑saturn‑audio.htm, so you can hear for yourself what the mic sounds like on a number of sources.

The Saturn is a warm and comfortable-sounding mic that avoids sounding in any way dull. It is useful for both vocals and instruments, where its multiple pattern switching makes it very flexible.