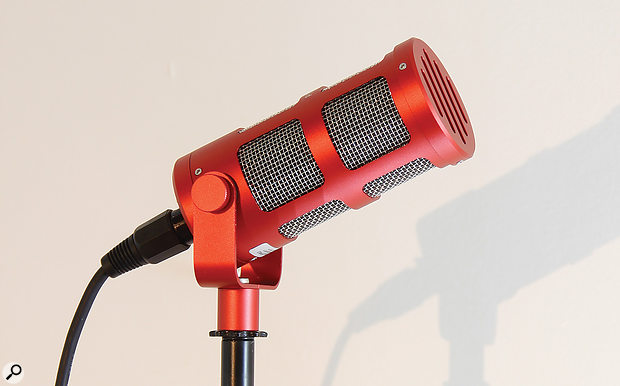 The Podcast Pro, however, is the first Sontronics mic designed specifically for the spoken word. Sontronics' founder Trevor Coley was apparently inspired to make the Podcast Pro by his teenage children who, like a lot of teenagers now, are heavily into podcasters, YouTubers, vloggers and game streamers. Impressed by the video production values of this new generation of content creators, his aim was to make top-notch audio quality available to them too, and at an accessible price. Despite its affordability, and in common with all Sontronics mics, the Podcast Pro is handmade in the UK and comes with a lifetime warranty.

Despite its affordability, and in common with all Sontronics mics, the Podcast Pro is handmade in the UK and comes with a lifetime warranty.

Available in either black or red finishes, the mic follows the familiar 'broadcast mic' format of being a tubby, end-fire affair with a yoke for mic-stand mounting. At 64mm in diameter and 132mm long, the mic is quite substantial in size but it feels fairly light, at just 310g. It doesn't feel cheap though — the red version I was sent had a beautiful anodised finish and a very neatly machined body, while one upside of its light weight is that it didn't cause any mic-stand droop, on either a conventional stand or the two boom arms I tried it with. If I were buying one myself I'd probably go for the black version, but I can see the 'statement red' working well for YouTubers and video-game streamers, who tend to have RGB backlit keyboards and bright, LED-lit setups!

Internally, the Podcast Pro shares its DNA with the Solo and Corona, in that they all employ the same supercardioid capsule. The chunky body houses an internal pop filter, which in addition to catching plosives, was also apparently designed to reduce sibilance. In common with most dynamic mics, the Podcast Pro rolls off at the high end rather earlier than most capacitor mics (a frequency response of 50Hz-15kHz is given). Sensitivity is quoted as being -50dBV (3mV/Pa), and output impedance is specified at 600Ω.

My first impressions were of a very neutral, natural sound, with that smooth, rounded-off high end I associate with broadcast mics...

Firing it up, my first impressions were of a very neutral, natural sound, with that smooth, rounded-off high end I associate with broadcast mics, where sizzly lip-smacking sounds are usefully tamed but there's still plenty of detail. I tried the mic at a variety of distances, with a 'beard-tickling' position providing a noticeable but not overblown thickness from the proximity effect, and greater distances reducing that thickness in a controllable way. Further from the mic the ratio of speech to room sound lessens, of course, but the pickup pattern seems quite tight here, so there's not much in the way of spill anyway. I was able to record a pretty clean bit of speech while the radio was playing in the next room, so I'm happy to recommend this mic for those who record in noisy households.

My next test was to set it up alongside my Heil PR30. Not a particularly fair test, I should add — the PR30 sells for around twice the price of the Podcast Pro, but interestingly its specs are very similar. Both are moving-coil mics, of course, and even though the Heil is sold as a cardioid, its pickup pattern is very tight and probably better described as a wide supercardioid. Heil's dynamic mics are well known for having an extended high end, and that trait was quite evident here, with the Heil having a more condenser-like top end and larger-than-life bass that was at first quite attention-grabbing. However, the PR30 was significantly more prone to picking up breath sounds and popping on plosives — neither of which were a problem with the Podcast Pro. I also found I could EQ the Sontronics mic to hype things up a bit and achieve a very similar tonality to the Heil, but without the pops and blasts.

Overall then, I'm happy to declare the Podcast Pro a success. It yields a smooth and very usable sound that responds well to a bit of 'enhancing' EQ where needed, but requires nothing in terms of correction. It's also affordable, yet built to last — I can't really fault it!

A classy-looking and sounding mic that ticks all of the boxes for broadcast and podcasting work. Highly recommended.