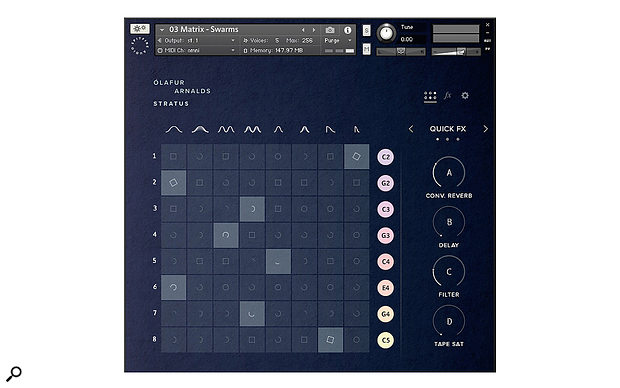 Out of misfortune comes opportunity. Having sustained nerve damage in a car accident a few years ago, Icelandic composer Ólafur Arnalds found himself temporarily unable to use his right hand. Then, after seeing a piano merrily playing pop tunes on its own with no pianist in an airport terminal, Mr. Arnalds bought two of them and started dreaming up a way of generating multiple notes from a simple chord. 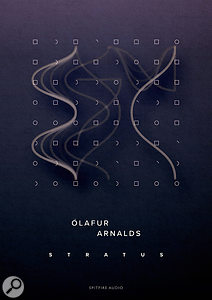 From that chance encounter has sprung a unique and intriguing sample collection developed in conjunction with programmer Halldór Eldjárn and Spitfire Audio. Three years in development, Stratus centres around a collection of phrases, polyrhythmic patterns and textures performed by a pair of Yamaha Disklavier felt-dampened, self-playing upright pianos in the composer's Reykjavik studio. The library (14.1GB installed) runs on Kontakt version 5.6.8 or higher, with a free copy of Kontakt Player included.

To make the patterns easily playable, Spitfire designed an eight-way matrix with a row of symbols representing pattern style across the top and the numerals one to eight (indicating polyphony) in a column on the left side. Clicking on one of the matrix's 64 squares thus pre-selects both the pattern type (which increases in complexity as you move from left to right) and how many of them you can hear at one time. While it takes some getting used to, this logical system squeezes a huge amount of musical variation into a small workspace.

Stratus contains four piano matrices, each containing multiple patterns: in response to your initial note, Rhythmic Waves outputs a soft, rippling series of unison or octave repeats with a built-in, subtle volume rise and fall. Rhythmic Attacks has a slightly harder sound and no volume surge, while Looped Rhythms is self-explanatory. Swarms (a concept close to Spitfire's heart) features random-sounding spaced repeats — these have five possible states, ranging from slow and sparse to more dense and complex. All the piano matrices offer an optional straight, centre-panned piano overlay.

The producer also used his vintage analogue keyboards to create four synth matrices: three of them mirror the piano's approach, with the first benefiting from a pleasant, rounded warm tone and soft attack. The fourth, Synth Swarms is a showstopper — a serenely beautiful, ethereal pure-toned synth texture with a gently swelling sustain. Absolutely heavenly.

You can randomise the matrices over a certain number of beats or seconds, and massage sounds with the built-in convolution reverb, delay, chorus, filter and tape saturation effects. Also available are Spitfire's trademark 'warps', including some stunning pads among the sci-fi sound effects.

One black mark: on my copy, the piano's first Rhythmic Waves pattern's D3, D#3 and E3 have an obvious click (which sounds like a physical artifact rather than a digital glitch) on the fifth note of the repeats. Ho hum. Nevertheless, this high-concept library merits four stars.