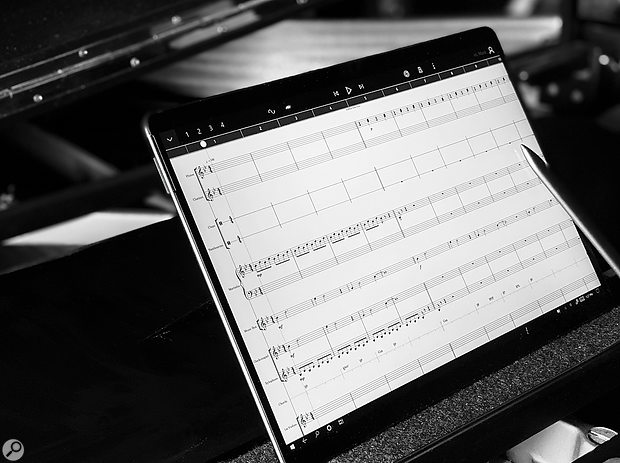 StaffPad in all its glory, seen here running on a Surface Pro X perched upon a Bösendorfer.

Pen-based input devices have been sadly neglected in music software. The StaffPad notation app reminds us why they're cool!

I've always been enthusiastic about pen-based computing, and, as such, have followed Microsoft's efforts in trying to establish the modern tablet PC since the early 2000s. For example, the quality of inking and handwriting recognition in system's like IBM ThinkPad X61t in 2006 were impressive, and it seemed obvious this was the way musicians should interact with notation on a computer. Control surfaces allowing audio to be mixed in software in the same manner as a hardware mixing console, for example, were firmly established by this point, so why not a digital pen?

In the niche world of musical notation, existing applications like Sibelius, Finale and now Dorico never saw an audience for the pen, which I always found a little disappointing. But 2015 saw the release of StaffPad, arguably the first pen-first notation software. Briefly reviewed by Dave Stewart in SOS June 2015, it was designed to work with Microsoft's Surface and other Windows devices with active digitisers. StaffPad made it possible to write music directly on your tablet, have the application recognise it, and render the notation before your very eyes with Steinberg's open-source Bravura music font — the same used by the company's Dorico score-writing software.

However, after this initial release, some onstage appearances at Microsoft events, and a few minor revisions, the application appeared to stall. There were annual posts to the company's blog, acknowledging the lack of updates to both the blog and StaffPad itself, accompanied by statements guaranteed to ring alarm bells, such as "we have a unique opportunity to rewrite the core foundations".

One problem was that StaffPad had remained a Windows-only application, essentially limiting its audience to those with a Microsoft Surface Pro, Studio or Go. A Mac version wouldn't have made sense, given that Macs didn't and don't have touchscreens; and when StaffPad was released in early 2015, iPads were also unsuitable given that the then current models lacked active digitisers with palm rejection. This limitation would change later that year with the release of the iPad Pro and Apple Pencil, although porting StaffPad to a completely new platform would clearly require a great deal of work.

The Same, But Different

Five years after its original release, however, StaffPad is back. And although it's an update, StaffPad's developers are keen to point out that it's based on "an entirely new codebase" providing improved performance and stability, a new file format, and, perhaps most significantly, cross-platform support. This means that in addition to running on Windows as before, StaffPad is now also available for the iPad Pro — the Pro being a prerequisite due to the requirement of a first- or second-generation Apple Pencil. This improved compatibility also extends to the Windows version, which now runs on Windows 10 and is compatible with ARM-based Windows 10 devices such as Microsoft's latest Surface Pro X.

The Welcome Page shows the Home page by default, where you access recent scores, create new ones or import an existing score from an XML or MIDI file. Other pages can be accessed via the top menu, including the Library and Collections pages for managing your scores, Templates, which offers a list of common instrument ensembles (such as a string quartet) as starting points, and the Store page, which handles in-app purchases. Finally, Discover presents a series of tutorial videos hosted by StaffPad co-founder David William Hearn.

Tapping an existing score or creating a new one opens the main StaffPad user interface. If you create a new score, a message prompting you to add an instrument will appear, and tapping this displays the Staffs controls. This consists of three lists: Category, Staff and the Instruments featured in your score. Category offers instrument families such as strings, woodwinds, brass and so on, as well as any additional libraries you may have purchased (see 'Sample Libraries' box later), and a special Utility Category includes Click, Chord, Bar Number and Tempo Staffs, whose complexities often go beyond what you might expect from such limpid naming.

With woodwinds selected, for example, the Staff list will be populated with instruments like piccolo, flute and oboe, and these can be added to your score by selecting them and tapping Add. You can later remove or swap these staffs by tapping the appropriate buttons, and the order can be adjusted on the iPad by tapping and dragging an entry up or down. This operation is slightly more clunky with the Windows version, since it requires the use of separate Move up and Move down buttons. Press OK when you're happy, and you can later return to this control by tapping Instruments in the Command bar. 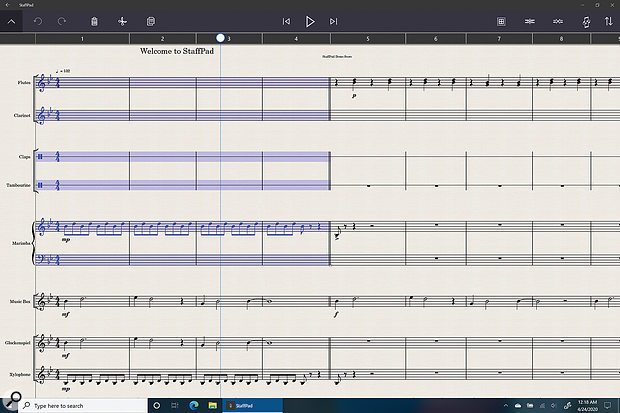 StaffPad running on Windows 10, showing a score selection in blue.

You can write directly onto the staff with the Pen or Pencil without having to enter a special mode. It's just like writing on a piece of paper, although, unlike a piece of paper, you can pinch-to-zoom or pan around the score with remarkably smooth results. When you begin writing, the bar lines of that bar will turn green to indicate it's an active bar, and when you're done, whether that's by inscribing in a new bar or simply tapping in an empty space, StaffPad will (hopefully) recognise your input and convert it into the intended notation.

If StaffPad doesn't recognise something you've written, the bar containing the offending scribbles will become illustrated by orange bar lines to designate it as a pending bar. In this case, you'll need to correct the offending jottings so that they can be reinterpreted, although one useful thing about pending bars is that they'll remain part of the score even though StaffPad won't be able to do much with them. They will be saved as part of the score to work with later, although they won't be printed as the StaffPad Help suggests.

While StaffPad's recognition works quite well, it's worth watching the Writing Music video as this offers some helpful explanations. Also, the Help documentation provides further assistance not just in the inscription of notes and rests, but also in writing accidentals, articulations, slurs and ties. After a bit of practice, you'll quickly gain fluency, even with more complicated gestures like drawing lines to create note groupings and so on.

One aspect of the interface that sometimes trips me up, both in terms of operation and naming, is the Toolbar — or rather that there are two of them, switchable with an arrow at the top-left. There's the Toolbar, which appears most of the time and includes controls to select which voice you're working in (used for polyphonic writing), Markup and Lasso tools for annotating the score and making freeform selections, as well as transport controls (including a click toggle), access to symbols and Fenby (see box). However, there's also the Command Bar, which offers undo and redo buttons, access to the Staff (Instrument) controls, an option to switch between the view of a transposed score or not, plus duplicate transport controls (sans click), and traditional application buttons for settings and printing and exporting scores.