10 Years Of The Apple iPad Skip to main content

10 Years Of The Apple iPad

Influencing How We Make And Record Music By Mark Wherry 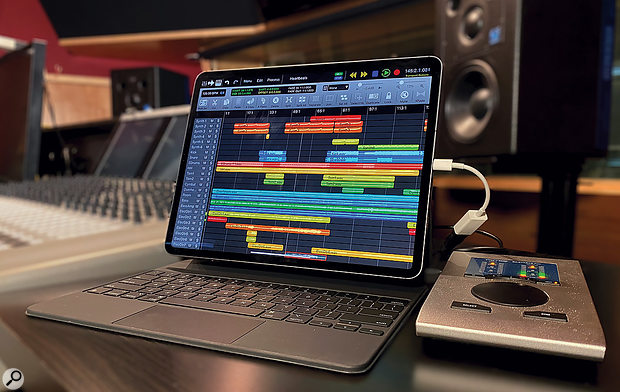 In 10 short years, the iPad has changed the way we make and record music. We explore what the current line-up has to offer, and what the future might hold.

It seems almost inconceivable that a decade has passed since Apple unveiled the iPad in January 2010. Steve Jobs described it as the company's "most advanced technology in a magical and revolutionary device at an unbelievable price". And while many derided the use of the term "magical", looking back 10 years on, it really was. Here was a device retailing for just shy of £430$500 that provided transformative experiences for basic tasks like web browsing, whilst also laying the foundations for so much more thanks to the sophistication hidden behind a multi-touch-capable, 10-inch piece of glass.

At an Apple Special Event held just over a year later, Jobs declared that 2010 had been the "Year of the iPad", and it was certainly the year of the iPad for Apple. With over 15 million sold in the nine months the product had been available from April to December, the iPad brought in a respectable revenue of $9.5 billion and eclipsed every previous attempt at a 'Tablet PC' ever sold.

The iPad 2 was quite a step forward for a new product category introduced less than a year before. It was thinner and lighter than the original, naturally, but with better performance, more memory, front and rear cameras, and a gyroscope. Where Apple emphasised the original iPad as being suitable for productivity with iWork apps such as Pages, Numbers and Keynote, the release of GarageBand and iMovie alongside the iPad 2 showed that Apple also saw this device as being suitable for creativity.

Since then, the iPad has exploded, with new hardware and software appearing annually. And with hindsight, I'd posit that 2019 was perhaps the most significant year yet in the product's life. This was the first time all hardware variations introduced thus far — the iPad, Air, mini and Pro — were available simultaneously. And, in terms of software, 2019 was the year Apple made a clear distinction between the versions of iOS (the company's mobile operating system) for iPhones and iPads.

The first member of the iPad family is the iPad itself. A seventh-generation model was quietly introduced in September 2019, representing an entry-level step into the ecosystem for £349$329. This latest iPad obviously exceeds what was possible a decade earlier, offering respectable functionality powered by an A10 Fusion chip and 3GB of memory (the previous model also had an A10 but with only 2GB of on-board RAM). This seventh-generation iPad enlarges the traditional 9.7-inch display to 10.2 inches, with an increased 2160 x 1620-pixel resolution. It's aesthetically akin to the iPad Air, with which shares the same 9.8 x 6.8-inch dimensions, whilst being almost unperceivably thicker and heavier by 0.05 inches and 27 grams.

The iPad represents tremendous value and is perfect for using apps to control another application. Such pairings include Logic Remote with Logic Pro X, Cubase iC Pro and Cubase, Avid Control with EUCON-compatible applications, and so on. The A10 is capable of running more than just controller apps, of course, although there's no escaping the fact this iPad is designed with a budget in mind. Trade-offs are especially noticeable when it comes to the screen, which lacks features such as True Tone and the visceral fit and finish of more expensive models; reflectivity is greater and the distance between the glass and the display seems more noticeable.

The more advanced iPad Air was first introduced in late 2013 as being "dramatically thinner, lighter and more powerful". However, after a second iteration was released a year later, in 2017 this iPad vanished into, well, thin air, only to be gently reintroduced last year. Like the new iPad, the third-generation iPad Air also has a larger screen, growing from 9.7 to 10.5 inches with a higher resolution of 2224 x 1668 pixels, but with a smaller surrounding bezel and maintaining a healthy depth and weight of just 0.24 inches and 456 grams. Based on the more powerful A12 Bionic (also with 3GB memory), the neoteric Air offers a perfect balance between performance, size and price. It's therefore the iPad most prospective users will likely choose if moths haven't raised families in your wallet.

Accompanying the discreet announcement of the new iPad Air was a fifth-generation iPad mini, for those who prefer a more Lilliputian size. The original mini was unveiled at a Special Event on October 23th 2012, having essentially the same specifications as the iPad 2 but with a 7.9-inch display. This new model has similar internals to the latest Air, however, featuring an A12 and 3GB of memory. With a 2048 x 1536 resolution in a 5.3 x 8 x 0.24-inch form factor weighing just 300g, it's certainly a cute companion.

The Biggest News Since iPad

The flagship member of the family is the iPad Pro, which was unveiled at an Event in September 2015 as "the biggest news in iPad since iPad", introducing new concepts, both technically and spiritually. Powered by the A9X processor and 4GB memory, the Pro was said to offer 22 and 360 times more CPU and GPU performance respectively than its original ancestor. And, from a sonic perspective, it was perhaps the point at which Apple started putting more resources into its audio hardware, with the Pro featuring a four-speaker array that could balance both left and right channels and high and low frequencies depending on how the device was held.

Physically, the Pro had the same stylings as the Air, but with a 12.9-inch display — the "biggest" display Apple had (and have) used in such a device. However, perhaps the 'biggest news' of all, which is why the Pro was also a spiritual leap, was its support for two new accessories: the Apple Pencil (see the 'Who Wants A Stylus' box), and the so-called Smart Keyboard. The latter was a keyboard cover not unlike Microsoft's Surface Type Cover, which magnetically attached to the Pro and provided power and data communication via a new three-dot Smart Connector. Today, all iPad models except the mini include a Smart Connector on the side or rear of the device.

While the iPad Pro was a great iPad, to be sure, this original model...