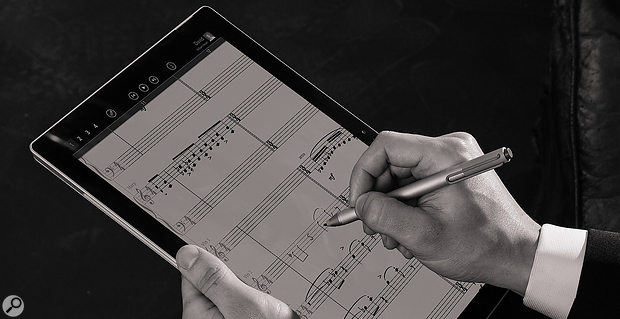 Writing music on a handheld tablet with orchestral playback; what would Beethoven have thought? Playback features include mute, solo and dynamic expression curve controls, while a built-in algorithmic reverb can create a concert-hall-like acoustic.

Using pencil and paper to write down music may seem outdated in this digital age, yet it retains a hands-on immediacy unrivalled by conventional notation software. Wouldn’t it be nice to have a system that combines the advantages of both?

Enter StaffPad, an app which lets you write music with a pen directly on screen, render it instantly into a professional-looking score and play it back on anything from an electric piano to a full-blown orchestra.

Designed by UK composer David William Hearn (co-creator of the Cinematic Strings sample library) and US software engineer Matthew Tesch, StaffPad is optimised for use with Microsoft’s Surface Pro 3 tablet, but will work with any Windows 8.1 device with active pen and touch support. In order for the tablet’s screen to distinguish between human touch and pen strokes, the pen needs to be the active digitiser type, as opposed to a capacitive stylus, which mimics the electrical properties of a fingertip.

I tested StaffPad on a Surface Pro 3 using the included N-trig pen. Though I’ve never managed to produce a legible signature on those accursed devices delivery men wave at you, I have to say that writing music on glass is a pleasurably smooth experience: the only minor snag is that holding the pen too far above the screen while resting your hand on the surface can create unintended touch commands. The knack (soon acquired) is to keep the pen tip hovering close to the screen. 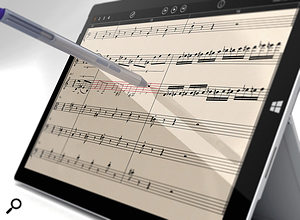 StaffPad requires a Windows 8.1 device with active pen and touch support, such as the Surface 3. The pen has to be the active digitiser type; capacitive styluses that mimic the electrical properties of a fingertip will not work with this app.

The app’s comprehensive onboard sample library includes a full, very decent-sounding orchestra (licensed from a well-established US sound company), saxophones, piano, bass guitar and drum kit, while inexpensive additional items such as an SATB choir, electric and acoustic guitars, Fender Rhodes and church organ are available from StaffPad’s in-app store. Though many instruments feature multiple dynamic layers and round robins, the whole shebang requires only 410MB of disk space.

Once you get the knack, writing music in StaffPad is quicker and easier than writing on paper — jot down a few notes and touch the pen anywhere outside the bar, and your notes are instantly typeset in a posh music font. The app is very good at interpreting pen strokes, so you can write in a quick, simple style and leave the software to do menial tasks like filling in black note heads! An excellent video tutorial contains useful tips on writing technique.

Editing is a doddle: to change a note’s pitch, simply drag it up or down on the stave, or press the pen’s erase button and tap on a note to delete it. You can use the pen for ledger lines, sharps, flats, natural signs, rests, slurs, accents, etc, while fancier symbols such as tremolo, trill and flutter tongue are selected from a palette. When the score encounters (say) a trill marking, the instrument in question actually plays that articulation — a very welcome feature!

StaffPad supports rhythmic values up to 128th notes (handy if you need to transcribe a Steve Vai guitar solo) and can display up to four separate voices on a single stave. You can also specify dynamics, tempo changes and accelerandos. Lyrics may be added with the onboard virtual keyboard, or with the pen via Windows’ handwriting recognition (a dedicated ‘lyric stave’ is due to be added in a free update). Also under development are additional percussion note heads to expand the current drum notation system, and a chord symbol menu. In the meantime, you can write in chord names as plain text.

One of this app’s most impressive features is its amazingly fast and fluid, super-smooth, glitch-free scrolling: using the usual touchscreen ‘swipe and pinch’ finger gestures to swiftly navigate a score or zoom into a particular bar is a great experience, reminiscent of whizzing round the globe on Google Earth. To help you keep your bearings as you glide back and forth or zoom in on notation details, ‘ghost clefs’ on the left of the screen display instrument names, and time and key signatures at all times.

Scores can be toggled between a concert pitch or transposed version, and the contents of a bar (or multiple bars) may be instantly copied and pasted anywhere within a piece. To re-space a bar, simply drag its end bar line around with the pen. When your score is complete, you can print it out and render it as an MP3 or uncompressed 44.1kHz WAV file. 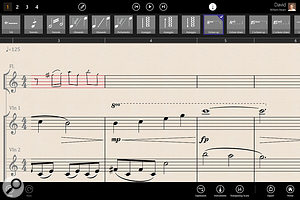 When you write music in StaffPad the stave turns red, indicating an ‘active bar’; touching the pen anywhere outside that bar instantly renders the notation as typeset music. You can use the pen for note input and simple markings such as staccato, accent, etc, while fancier articulation symbols such as trills, arpeggios and glissandi are provided in a menu.

Despite StaffPad’s sequencer-like playback, you can’t actually record audio or MIDI into it, but it will import standard MIDI files or Music XML files. Scores can be exported in either of those formats, enabling two-way communication with notation programs like Sibelius or Finale. Individual parts can also be extracted as XML .XPS files. I foresee a future where orchestral session players read their parts from tablets, using footswitches for virtual page turns and employing the app’s handy ‘sketch layer’ to add handwritten notes to their part.

Since the world, his wife, their seven-year-old daughter and pet gerbil own an iPad, the question of Apple iOS compatibility has been frequently raised (not least by the gerbil). Android users have posed the same FAQ. According to Hearn, certain aspects of the iPad’s screen technology would compromise StaffPad’s pen experience to an unacceptable degree, while compatible Android devices are too rare to justify the extensive re-coding required for that OS. So Mac and Android users will have to either live without the app, or cross the Rubicon and buy a Windows device on which to run it.

From a single Facebook post to a group of friends, this ingenious program generated 1.9 million views in two weeks, so it’s clearly of interest to a wide artistic community. Don’t let the ‘app’ tag fool you: though it’s fun to use, StaffPad is not a toy, gadget or game — it’s a serious music tool which transforms your pen sketches into professional scores and plays them back with a convincing sound palette. StaffPad is available exclusively from the Windows Store.